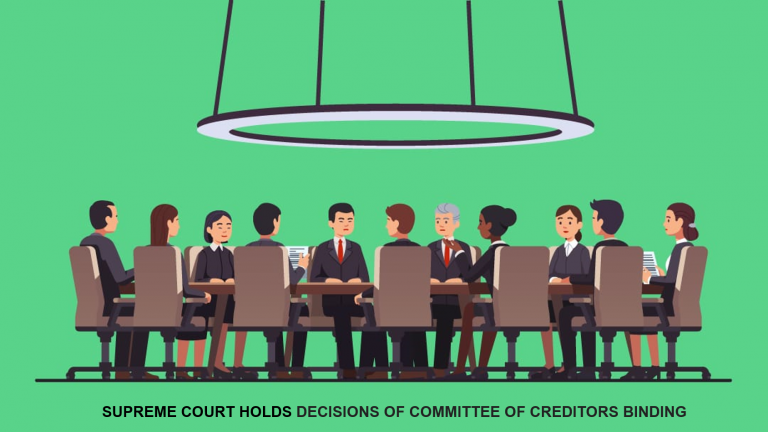 The Three Judge Bench #SupremeCourt has in a recent case of Kalpraj Dharamshi and Anr. Vs Kotak Investment Advisors Ltd and Anr. passed a Judgment dated 10-03-2021 regarding whether National Company Law Tribunal (#NCLT) can interfere with the commercial decisions taken by a #committeeofcreditors under the #InsolvencyandBankruptcyCode (the Code).

In this case, Ricoh India Limited (the Corporate Debtor) filed an Application dated 29-01-2018 under Section 10 of the Code for initiation of Corporate Insolvency Resolution Process (CIRP) of itself before the NCLT, Mumbai. The NCLT admitted the said Section 10 Application, vide Order dated 14-05-2018 and directed Moratorium under Section 14 of the Code. The NCLT also appointed Mr. Krishna Chamadia as Interim Resolution Professional (IRP), who was later confirmed as the Resolution Professional (RP) by a Committee of Creditors (CoC) on 15-06-2018.

The said RP issued a Notification dated 09-07-2018 thereby inviting expression of interest (EOI) to submit a resolution plan from interested resolution applicants. The final date for submission of the resolution plan was 08-01-2019. Kotak Investment Advisors Limited (the Respondent No. 1 herein) and Karvy Data Management Systems Limited submitted their resolution plans on the last date, i.e. 08-01-2019. However, few other applicants including Kalpraj Dharamshi and Rekha Jhunjhunwala, a Consortium (the Appellant) submitted their EOI and Resolution Plans after the expiry of deadline. The Appellant submitted its EOI and Resolution Plan to RP on 27-01-2019.

Aggrieved by the aforesaid NCLT Order dated 28-11-2019, the Respondent No. 1 filed a Writ Petition before the Hon’ble Bombay High Court on the ground that the procedure followed by NCLT is in breach of the principles of natural justice. However, the High Court passed a Judgment dated 28-01-2020 and dismissed the Writ Petition on the ground that the Respondent No. 1 has an alternate and efficacious remedy of filing an appeal before the National Company Law Appellate Tribunal (NCLAT).

Thus, the Respondent No. 1 filed an Appeal before the NCLAT on 18-02-2020. The NCLAT passed an Order dated 05-08-2020 and held that the procedure adopted by the RP and the CoC was in breach of the provisions of the Code. Further, the NCLAT set aside the NCLT Order dated 28-11-2019 and directed the CoC to take decision afresh and consider only those Resolution Plans that were submitted within the deadline. In case, no decision is taken by the CoC, then the NCLT may pass orders for liquidation of the Corporate Debtor.

Aggrieved by the NCLAT Order dated 05-08-2020, Appeals have been filed before the Supreme Court by the Appellants, the Financial and Operational Creditors and the RP. The Apex Court made the following observations in this case:

1) That a person may invoke the jurisdiction of a High Court under Article 226 of the Constitution of India, i.e. for filing a writ petition, in the event that the proceedings before the statutory authority are in breach of principles of natural justice or are beyond the jurisdiction of the authority. Thus, the Supreme Court held that the Respondent No. 1 was bona fide in proceeding before the High Court in good faith and with due diligence on the ground of breach of principles of natural justice.

4) That the CoC considered the Resolution Plan submitted by the Appellant for the purpose of value maximisation of assets of the Corporate Debtor. The decisions pertaining to evaluation of proposals, resolution plans, etc to keep the debtor company as a going concern, including decisions about sale of business etc, are required to be taken by the committee of creditors.

5) That the commercial wisdom of the CoC has been given paramount status without any judicial intervention to ensure that all processes are completed as per the provisions of the Code. The CoC would be well informed about the viability of the Corporate Debtor and feasibility of the proposed Resolution Plan. They undertake detail examination and assessment of the Resolution Plan before approving or rejecting it.

6) As per the provisions of Sections 30 (2) and 61 (3) of the Code, the NCLT will only confirm if the said Resolution Plan is in accordance with law, and that the plan includes payment for CIRP costs, payment to all creditors including those who are not on the committee of creditors, etc. There is no provision that allows NCLT to review the commercial decision exercised by CoC of approving the Resolution Plan or rejecting the same.