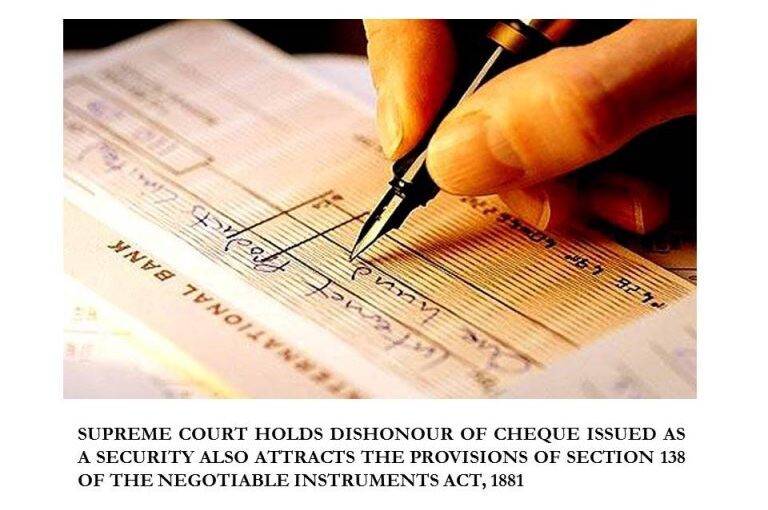 SUPREME COURT HOLDS DISHONOUR OF CHEQUE ISSUED AS A SECURITY ALSO ATTRACTS THE PROVISIONS OF SECTION 138 OF THE NEGOTIABLE INSTRUMENTS ACT, 1881

For reference Section 138 of the N.I. Act is reproduced as follows:

Dishonour of cheque for insufficiency, etc., of funds in the account. —Where any cheque drawn by a person on an account maintained by him with a banker for payment of any amount of money to another person from out of that account for the discharge, in whole or in part, of any debt or other liability, is returned by the bank unpaid, either because of the amount of money standing to the credit of that account is insufficient to honour the cheque or that it exceeds the amount arranged to be paid from that account by an agreement made with that bank, such person shall be deemed to have committed an offence and shall, without prejudice to any other provisions of this Act, be punished with imprisonment for [a term which may be extended to two years], or with fine which may extend to twice the amount of the cheque, or with both: Provided that nothing contained in this section shall apply unless—

After taking into consideration the facts of the case and the arguments advanced by the Parties to the dispute, the Bench observed that the dishonour of cheque issued as a security can also attract offence under Section 138 of the N.I. Act. “There cannot be a hard and fast rule that a cheque which is issued as security can never be presented by the drawee of the cheque.”

The Court noted that though the cheque was issued as a security at the point when the loan was advanced, it was issued as an assurance to repay the amount after the debt becomes due for repayment.

Hence the Apex Court while placing reliance on the case of Sampelly Satyanarayan Rao vs. Indian Renewable Energy Development Agency Ltd., (Criminal Appeal No.867 of 2016) observed as follows:

“16. A cheque issued as security pursuant to a financial transaction cannot be considered as a worthless piece of paper under every circumstance. ‘Security’ in its true sense is the state of being safe and the security given for a loan is something given as a pledge of payment. It is given, deposited or pledged to make certain the fulfilment of an obligation to which the parties to the transaction are bound. If in a transaction, a loan is advanced and the borrower agrees to repay the amount in a specified timeframe and issues a cheque as security to secure such repayment; if the loan amount is not repaid in any other form before the due date or if there is no other understanding or agreement between the parties to defer the payment of amount, the cheque which is issued as security would mature for presentation and the drawee of the cheque would be entitled to present the same. On such presentation, if the same is dishonoured, the consequences contemplated under Section 138 and the other provisions of N.I. Act would flow.”

Therefore, the Bench while setting aside the Impugned Order dated 17-12-2019 and restoring the Orders dated 04-07-2016 and 13-06-2019 passed by the learned Judicial Magistrate made an observation that the loan was already in subsistence when the cheque was issued and the same had become payable during June/July 2015 and the cheque issued towards repayment was agreed to be presented thereafter. The Respondent No. 2 was under an obligation to arrange sufficient balance in the account to honour the cheque which was to be presented subsequent to June/July 2015.