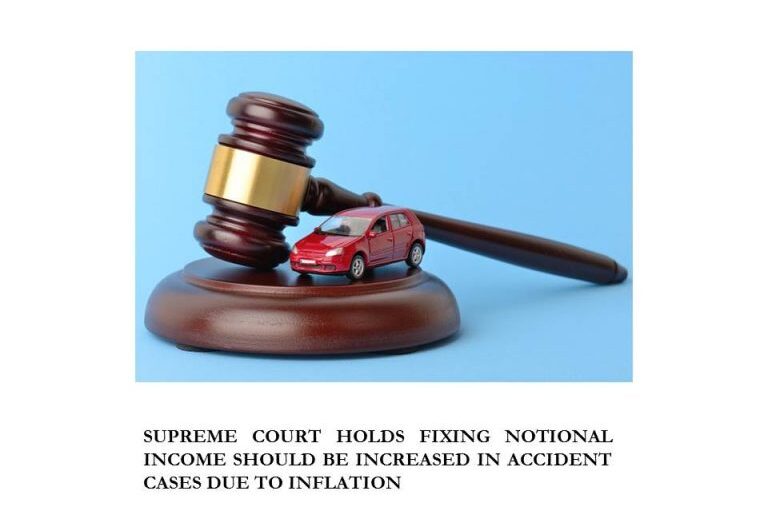 A Two Judge Bench of the Hon’ble #SupremeCourt of India comprising of Justices R. Subhash Reddy and Hrishikesh Roy vide #Judgment dated 16-11-2021 in the case of Kurvan Ansari alias Kurvan Ali & Anr. v. Shyam Kishore Murmu & Anr. {Civil Appeal No.6902 of 2021 (Arising out of Special Leave Petition (C) No.5311 of 2019)} held that fixing #notionalincome at Rs. 15,000/- per annum as per Schedule-II for the claims under Section 163-A of the #MotorVehicles Act, 1988 (Act) for non-earning members is not just and reasonable.

In the present case, on 06-09-2004 the son of the Appellants-Claimants viz., Ibran Ali, aged 7 years was dashed by a motorcycle which was being driven by Mr Sunil Gurum (Respondent No. 1 and insured with Respondent No. 2) while he was standing by the side of the road, in front of his maternal grandparents’ house. The accident caused grievous injuries resulting in his death. Consequently, the Appellants-Claimants filed a Claim Petition under Section 163-A of the Act claiming compensation on account of the accident which resulted in their child’s death.

Before High Court of Jharkhand, Ranchi

The High Court dismissed the Appeal preferred by the Respondent No. 2 and partly allowed the Appeal preferred by the Appellants-Claimants by awarding a further sum of Rs.15,000/- towards funeral expenses. The High Court also held that the Appellants are entitled to a sum of Rs.2,40,000/- towards compensation with interest as awarded by the Tribunal from the date of filing Claim Petition.

Thus, the Court held that it is a fit case to increase the notional income by taking into account the inflation, devaluation of the rupee and cost of living.

The Court in this regard observed as follows:

“16. In view of the above, we deem it appropriate to take notional income of the deceased at Rs.25,000/- (Rupees twenty five thousand only) per annum. Accordingly, when the notional income is multiplied with applicable multiplier ‘15’, as prescribed in Schedule-II for the claims under Section 163-A of the Motor Vehicles Act 1988, it comes to Rs.3,75,000/- (Rs.25,000/- x Multiplier 15) towards loss of dependency. The Appellants are also entitled to a sum of Rs.40,000/- each towards filial consortium and Rs.15,000/- towards funeral expenses.”

The Bench while partly allowing the Appeal observed that the Appellants-Claimants were entitled to a sum of Rs. 4,70,000/- as total compensation with interest at 6% per annum from the date of claim Petition till the date of realisation.

The Apex Court held as follows:

“The enhanced compensation shall be apportioned between the Appellants as ordered by the Tribunal. The entire compensation shall be paid to the appellants by Respondent No.2 – Insurance Company, and we keep it open to the Insurance Company to recover the same from Respondent No.1 – owner of the motorcycle by initiating appropriate proceedings as the motorcycle was driven by the driver who was not possessing valid driving licence on the date of the accident.”

The Apex Court’s Judgment on enhancement of notional income will come as a big relief to victims of accidents who, if surviving, have to fight for years before they get what is due. In a case like this where the parents lost their child such as a step of enhancement of notional income will not only bring relief to the Complainants monetarily but also make them feel that their stand is vindicated and justified.