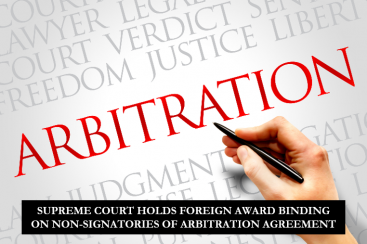 A Two Judge Bench of the Hon’ble #SupremeCourt of India comprising of Justices RF Nariman and B.R. Gavai passed a Judgment dated 10-08-2021 in the case of Gemini Bay Transcription Pvt. Ltd. v. Integrated Sales Service Pvt. Ltd., Civil Appeal Nos.8343-8344 Of 2018 and held that a #foreignaward can be binding on non-signatories of an #arbitration #agreement.

In the present case, the International Arbitration Tribunal passed an Award in a dispute between a Hong Kong based Company, Integrated Sales Service Ltd. [ISS / Respondent No. 1] and DMC Management Consultants Ltd. [DMC], a Company registered in India, whose principal business address is at Nagpur.  The Respondent No. 1 and DMC had entered into a Representation Agreement (Agreement) dated 18-09-2000, whereby the Respondent No. 1 was to assist DMC to sell its goods and services to prospective customers, and in consideration thereof was to receive commission. This Agreement came into force on 03-10-2000. A first and second amendment to this Agreement was made between the Parties.

Thereafter, a dispute arose between the Parties and a Notice for Arbitration was sent on 22-06-2009 by the Respondent No. 1 to DMC. A statement of claim dated 22-06-2009 was thereafter filed before the Arbitrator, Mr. Arun Dev Upadhyaya against the Respondents, DMC (India), DMC Global (company registered in Mauritius), Gemini Bay Consulting Limited (company registered in the British Virgin Islands) and Gemini Bay Transcription Private Limited (GBT), i.e. both signatories and non-signatories of the Arbitration Agreement.

On 23-12-2009, the Ld. Arbitrator raised the following four issues in the Preliminary Award:

However, the Award was made binding on certain entities which were not signatories to the Agreement. Thereafter, the Respondent No. 1- ISS filed an Application for enforcement of the Award before the Single Bench of High Court of Bombay (High Court).

The Single Judge vide Judgment dated 18-04-2016“held that Agreement as well as the Arbitration Clause cannot be enforced against the persons who are non-signatories, even though such non-signatories may participate in the arbitration, as no acquiescence or estoppel can apply to issues relatable to jurisdiction.” Furthermore, the Single Judge applied Sections 48(1)(c) to (e) of the Arbitration and Conciliation Act, 1996 (Act) and held that this award would not be enforceable against Gemini Bay Transcription Private Limited (GBT) and Arun Dev Upadhyaya since they were not a party to the Arbitration Agreement.

The Parties went in appeal and the Division Bench while setting aside the Single Bench Judgment, observed that “the Court held that none of the grounds contained in Section 48 would apply so as to resist enforcement of the foreign award in this case.” vide Judgment dated 04-01-2017.

Section 48 of Arbitration Act. Conditions for enforcement of foreign awards.—

(1) Enforcement of a foreign award may be refused, at the request of the party against whom it is invoked, only if that party furnishes to the court proof that—

Aggrieved, DMC filed a Special Leave Petition (SLP) in the Hon’ble Supreme Court of India. While considering the Appeal filed by DMC against the Judgment of the Division Bench of the High Court, the Apex Court relied upon the following provisions:

“29. A reading of Section 44 of the Arbitration and Conciliation Act, 1996 would show that there are six ingredients to an award being a foreign award under the said Section. First, it must be an arbitral award on differences between persons arising out of legal relationships. Second, these differences may be in contract or outside of contract, for example, in tort. Third, the legal relationship so spoken of ought to be considered “commercial” under the law in India. Fourth, the award must be made on or after the 11th day of October, 1960. Fifth, the award must be a New York Convention award – in short it must be in pursuance of an agreement in writing to which the New York Convention applies and be in one of such territories. And Sixth, it must be made in one of such territories which the Central Government by notification declares to be territories to which the New York Convention applies.”

With respect to Section 47, the Apex Court observed that following are the pre-requisites for the enforcement of a foreign award:

“the original award or a copy thereof, duly authenticated in the manner required by the law of the country in which it was made;
the original agreement for arbitration or a duly certified copy thereof; and
such evidence as may be necessary to prove that the award is a foreign award.”

The Court while placing reliance on the above mentioned provision observed that:

Further, the Bench while dismissing the Appeal held that a non-signatory’s objections will not fit into the grounds for refusal of enforcement of foreign award under Section 48(1) of the Act. In this regard, the Bench made the following observation: