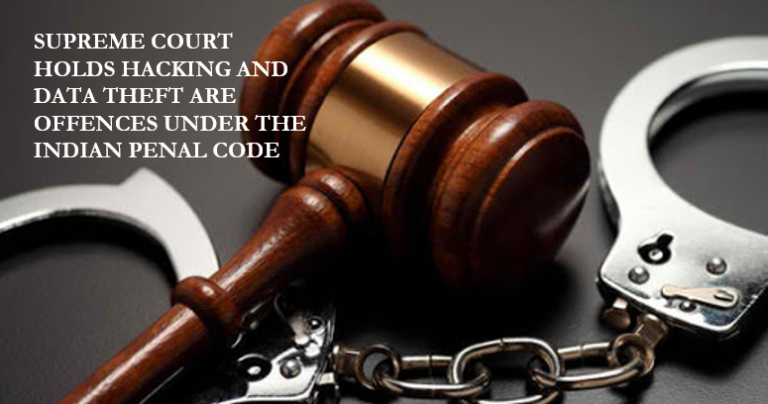 The Vacation Bench of the Hon’ble #SupremeCourt of India comprising of Justices Dinesh Maheshwari and Aniruddha Bose passed an Order dated 18-05-2021 in the case of Jagjit Singh v. The State of Punjab {Special Leave to Appeal (Crl. No(s). 3583/2021} and held that apart from being liable under the provisions of the Information Technology Act, 2005 (#IT Act), a person shall also be liable under the provisions of the Indian Penal Code, 1860 (#IPC) for offences such as #hacking, #datatheft etc.

In the present case, M/s TCY Learning Solutions Private Limited (Complainant-Company) was in the business of education technology and test preparation including class room and online coaching for more than a decade. The Complainant-Company had also developed its own software for imparting education. One Ramandeep Singh who was the Co-Founder and Director of Exoways (Petitioner No.1 before the HC) joined the Complainant-Company in February, 2015 as Deputy Manager Marketing but subsequently resigned to set up another Company along with Jagjit Singh (Petitioner No.2; in the SLP petitioner before the Hon’ble Supreme Court) and one Rupinder Singh in the year 2018 and formed a Company in the name of M/s Exoways Web Technologies Pvt. Ltd.. The said Company was also engaged in the business of providing English Language Training modules for students and coaching centres for English Language test preparations like IELTS through their website www.fourmodules.com.

Thus, the Complainant-Company filed a complaint and an investigation began in the matter. On 20-10-2020, an FIR was filed under various provisions of the Indian Penal Code (IPC) namely, Section 406 (Criminal Breach of Trust), Section 408 (Criminal Breach of Trust by clerk or servant in respect of property entrusted to him), Section 309 (Theft), Section 381 (Theft by clerk or servant of property in possession of master), Section 120-B and 34 and Sections 43 (damage to computer, computer-system, etc.), Section 66 (Computer-related offences), Section 66-B (dishonestly receiving stolen computer resource or communication device) of the Information Technology Act, 2000 (IT Act, 2000).

The High Court of Punjab & Haryana at Chandigarh (High Court) vide impugned Order dated 17-03-2021 had dismissed the anticipatory bail plea of the Petitioner No.2.

Aggrieved, a Special Leave Petition (SLP) was filed in the Apex Court impugning the Order dated 17-03-2021. One of the questions that arose for consideration of the Bench was “Whether the Petitioner is entitled to the benefit of Anticipatory Bail, where his statutory right to bail is defeated by mischievously invoking non-bailable offences of the IPC?”

The Bench noted that “As per contents of the FIR, there is basic breach of trust! And you are part of the Company! IPC is applicable!”

Furthermore, the Petitioner had prayed for interim relief by way of an ex-parte ad-interim protection from any coercive action and an ex-parte ad-interim stay on the Judgment passed by the High Court that had concluded that custodial interrogation in the case was necessary on the ground that he joined and cooperated in the investigation.

On this point, the Bench made an observation that “If we give anticipatory bail in such cases, it would be a cross on our system”.

While dismissing the SLP, the Hon’ble SC noted “that in the interest of justice, it is provided that in case the petitioner surrenders before the Court concerned and files an application for regular bail, the same may be considered and disposed of on its own merits and in accordance with law expeditiously; and for that matter it is also provided that the observations made by the High Court in the order dated 17.03.2021 shall remain confined towards consideration of the prayer for anticipatory bail only.”