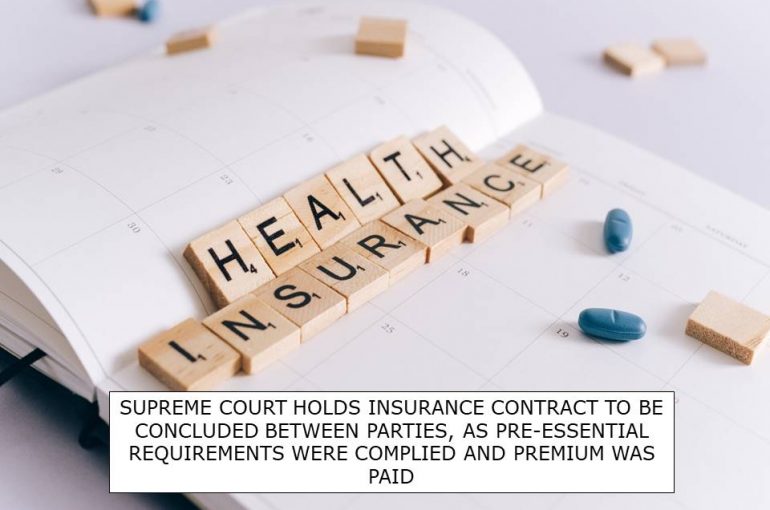 SUPREME COURT HOLDS INSURANCE CONTRACT TO BE CONCLUDED BETWEEN PARTIES, AS PRE-ESSENTIAL REQUIREMENTS WERE COMPLIED AND PREMIUM WAS PAID

A two-Judge Bench of the Supreme Court comprising Justice Hrishikesh Roy and Justice K.M. Joseph, passed a Judgment dated 15.12.2022 in the case titled Gokal Chand (D) Thr. Lrs. V. Axis Bank Ltd. & Anr. in SLP (C) No. 14140 of 2020 and observed that the Insurance Contract between the Parties was deemed to be concluded and hence, the Respondent No. 2-Insurer would be liable to settle the insurance claim.

On 30.7.2017, as a pre-condition for securing the home loan, the Appellant had gone through a medical test. But before the Insurance Contract could be executed, Gokal Chand died of cardiac arrest. As a result, the Legal Representatives of Gokal Chand (“Appellants”) made a claim for his life insurance, but on 08.08.2017, the Respondent No. 2 refused such claim, as it was a case of unconcluded Contract and hence, they were not liable to pay any amount to the Appellants.

As a result, the Appellant filed a Complaint No. 605 of 2017 before the State Consumer Disputes Redressal Commission, Haryana (“State Commission”). The State Commission, vide Judgment dated 14.05.2019, dismissed the Consumer Complaint on the ground that in the present case, the Respondents had only offered the Insurance Policy by way of debiting the amount of the Deceased-Insured towards premium, but the Deceased-Insured had not communicated his acceptance towards the Insurance Policy, hence the Contract is not deemed to have been concluded or come into existence between the Parties. Hence, the Appellants were not entitled to the benefit of life insurance amount under the unconcluded Insurance Contract.

Aggrieved by the State Commission Judgment dated 14.05.2019, the Appellant preferred First Appeal No. 1834 of 2019 before the National Consumer Disputes Redressal Commission (“National Commission”).  The National Commission, vide Order dated 12.09.2019, dismissed the said Appeal and observed that in the absence of acceptance of the proposal and issuance of an insurance policy to him, there was no relationship of insurer and insured between him and respondent No.2. In the absence of such a relationship, the respondent No.2 cannot be held liable for making payment to the complainant in terms of the proposal submitted by late Sh. Gokal Chand which respondent No.2 never accepted… As far as Respondent No.1 Axis Bank Ltd is concerned they have having forwarded the proposal to the insurer before late Sh. Gokal Chand died, they cannot be said to be deficient in rendering services to the complainant or to late Sh. Gokal Chand.

Aggrieved by the National Commission Order dated 12.09.2019, the Appellant preferred an Appeal before the Supreme Court and submitted following contentions.

i) Harshit Khanduja, the learned Counsel for the Appellant submitted that the death of the Insured Gokal Chand was intimated to the Respondents on 15.8.2017 with a request to process the insurance claim. However, instead of acting on the information furnished by the Appellants, an ante-dated Letter posted on 16.08.2017 was served on the Appellant with the information that the proposal for insurance cover for Gokal Chand had been postponed by six months, as his medical / treadmill test as required. Further, both Forums failed to consider the fact that the Insurance Company retained the insurance premium for some time after the death of the Insured. Additionally, the medical test result of the Insured was normal, hence there was no reason to either postpone or to reject the insurance policy when the premium was ascertained and debited by the Bank in favor of the Insurance Company. Thus, the act of the Insurance Company was an afterthought prompted only after the intimation of death and a request for processing claim.

ii) Bagga, the learned Counsel, for the Respondent No. 2 submitted that the Insurance Company is not obliged to honor the insurance claim since notwithstanding the collection of the premium amount, the policy was at the proposal stage only. Moreover, unless acceptance of the proposal leads to issuance of an insurance policy, there can be no relationship between the Insurer and the Insured for a valid claim.

The Apex Court, vide Judgment dated 15.12.2022, made the following observations:

Therefore, based on the aforesaid observations, the Apex Court allowed the Appeal and set aside the National Commission Order dated 12.09.2019. The Bench further directed the Respondent No.2 to process the Appellant’s insurance claim.