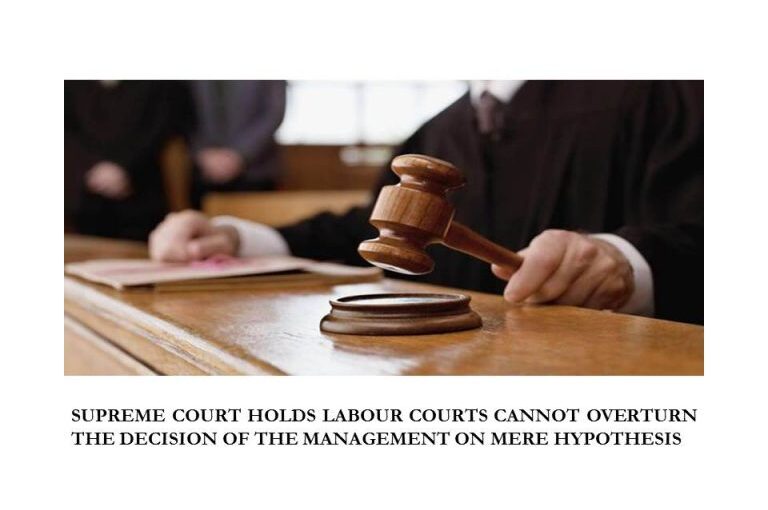 A Two Judge Bench of the Hon’ble #SupremeCourt of India comprising of Justices Ajay Rastogi and Abhay S. Oka passed a Judgment dated 29-09-2021 in the case of Standard Chartered Bank V. R.C. Srivastava Civil Appeal No(S). 6092 Of 2021 and held that a #LabourCourt cannot overturn the decision of the #management ipse dixit and that such a decision should not be based on mere hypothesis.

For the alleged gross misconduct which he had committed in discharge of his duties, a departmental enquiry was held and in the course of enquiry, the evidence of three witnesses, who were the officers and with whom the alleged misconduct had occurred were produced by the Management and in defence, the Respondent­Workman had not appeared in the witness box but two employees of the Bank were produced.

Enquiry was conducted by the Enquiry Officer as per the terms of the Bipartite Settlement and after due compliance with the principles of natural justice the charges proved against the delinquent Respondent and the disciplinary authority after due compliance, confirmed the findings of the Enquiry Officer and punished the Respondent­Workman with penalty of dismissal from service vide an Order dated 22-08-1991.

Thereafter, the appropriate Government vide Notification dated 30-06-1992 made a reference to the Tribunal for adjudication.

The Tribunal in the first instance after examining the record of enquiry held that the domestic enquiry that was conducted by the Enquiry Officer was fair and proper. However, on re-examination of the record of enquiry and after apprising the statement of the Management witnesses, recorded a finding that there was a failure on the part of the Management of the Appellant­Bank as it could not establish the charges levelled against the Respondent­Workman and held the charges not being proved and set aside the Order of dismissal from service and thereby passed a direction vide Award dated 14-09-2006 to reinstate the Respondent­Workman in service with full back wages, seniority and all the consequential benefits attached to the post.

Subsequently, the Award dated 14-09-2006 was challenged by the Appellant­Bank in a Writ Petition under Article 226 and 227 of the Constitution and the High Court of Judicature at Allahabad (High Court) vide impugned Order dated 21-11-2014, dismissed the Writ Petition.

Aggrieved, an Appeal was filed in the Hon’ble Supreme Court of India impugning the Order dated 21-11-2014. After taking into consideration, the facts of the present case and the arguments advanced by the parties to the dispute, Supreme Court observed that Labour Court does not have the power to overturn the decision of the Management on “ipse dixit” and its decision should not be based on mere hypothesis.

The Bench observed that the jurisdiction of a Labour Court under Section 11A of the Industrial Disputes Act, 1947 (Act) must be judiciously exercised and cannot be exercised either whimsically or capriciously. “It may scrutinize or analyse the evidence but what is important is how it does so.”

For reference Section 11A of the Industrial Disputes Act, 1947 is reproduced as follows:

The Apex Court after examining the facts observed as follows:

“18. In the instant case, after we have gone through the record, we find that the Tribunal has converted itself into a Court of Appeal as an appellate authority and has exceeded its jurisdiction while appreciating the finding recorded in the course of domestic enquiry….”

Furthermore, the Court held that the High Court had committed an error while passing the impugned Judgment and upholding the Tribunal’s Order of reinstatement. According to the Bench, the Tribunal tested the domestic enquiry on the broad principles of charge to be proved beyond reasonable doubt which is a test in criminal justice system, “and has completely forgotten the fact that the domestic enquiry is to be tested on the principles of preponderance of probabilities.”

Hence, the Apex Court vide its Judgment dated 29-09-2021, held that the Award dated 14-09-2006 passed by the Tribunal and confirmed by the High Court under Impugned Judgment dated 21-11-2014 is not sustainable in law. The Supreme Court confirmed the dismissal of the Respondent-Workman.

The Apex Court while allowing the Appeal filed by the Appellant­Bank against the Impugned Judgment dated 21-11-2014 affirming the Tribunal’s Order of reinstatement of the employee, clarified that there will be no recovery in reference to the payment which has been made over the Respondent­Workman in the interregnum period.