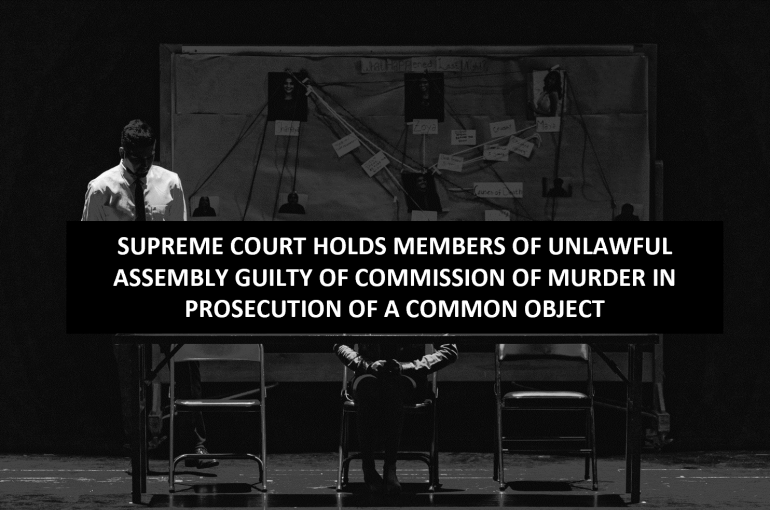 A Two Judge Bench of the Supreme Court comprising of Justice C.T. Ravikumar and Justice Sudhanshu Dhulia passed a Judgment dated 17-10-2022 in the matter of Gurmail Singh & Anr. vs State of Uttar Pradesh & Anr. Criminal Appeal No. 965 of 2018 reiterating that the ingredients of Section 149 (Every member of unlawful assembly guilty of offence committed in prosecution of common object) of the Indian Penal Code (IPC) was applicable and held that the members of this unlawful assembly were guilty of committing murder of the deceased person in prosecution of a common object.

In the present case, the Accused, Thakur Singh and Chanan Singh, brothers of the Deceased, Dalip Singh, purchased 16 Acres of Land in District Rampur under two different sale deeds. The Accused were jointly cultivating on one portion of the land and the Deceased was cultivating on the other portion of the land. Later, the Accused sought for an exchange of the lands with the Deceased, which was not agreeable to the Deceased. The said sibling dispute led to several civil litigations and later on, in the unfortunate death of Dalip Singh. The Accused along with some other persons fired at the Deceased around 26-10-1980 in the agricultural field and the Prosecution Witness (PW)-1, Darshan Singh who was present at the crime scene, tried to save the Deceased, but he died enroute to the hospital. Thereafter, PW-1 lodged a First Information Report (FIR) with the Police.

The Court of Additional Sessions Judge – III, Rampur, Uttar Pradesh (Trial Court) in Sessions Trial No.167 / 1981 convicted all the Accused for offences under Sections 302 (Punishment for murder) and 149 (Every member of unlawful assembly guilty of offence committed in prosecution of common object) of IPC. They jointly filed Criminal Appeal No.1510 / 1982 before the High Court of Judicature at Allahabad (High Court). The High Court vide Judgment dated 19-08-2014 dismissed the Appeal and upheld their conviction.

Aggrieved, the Accused filed an Appeal before the Supreme Court against the High Court Judgment dated 19-08-2014 and observed as follows:

1) That as per PW-4, Dr. HB Bhatt, the cause of death was shock and hemorrhage caused due to the injuries sustained by the Deceased that were sufficient in the ordinary course of nature to cause death. Further, the gunshots were also grievous in nature.

2) As per the Prosecution Witnesses, there was unlawful assemblage in which the Appellant was also a member and the same has not been contested by the Appellant.

3) That the Apex Court has in its earlier decisions observed as follows regarding the criteria to be satisfied in order to attract conviction under Section 149 IPC:

ii) “inference of common object has to be drawn from the various factors such as the weapons with which the members were armed, their movements, the acts of violence committed by them and the result.”

iii) “in order to attract Section 149, IPC, it must be shown that the incriminating act was done to accomplish the common object of the unlawful assembly and it must be within the knowledge of the other members as one likely to be committed in prosecution of the common object.”

iv) Thus, in this case, as the presence of the Accused at the place of occurrence as part of the unlawful assembly was not disputed by him, the same was held to be sufficient to hold him guilty.

v) Further, as required under Section 149 IPC “the test is that persons having the common object must be five or more”, but the mere death of the other co-convicts during the pendency of the Appeal before the High Court or the Supreme Court would not have effect on the vicarious liability of the surviving Accused, as (a) membership of the Appellant in the unlawful assembly was established and (b) commission of offence in furtherance of a common object was established.

vi) Hence, the Appellant cannot escape from the vicarious liability for the acts committed by any one of the members of that assemblage by virtue of Section 149, IPC if the common object of the unlawful assembly was to commit murder and not causing grievous injury.

Based on the aforesaid evidence of the Prosecution Witnesses, Doctor’s Statement and other evidence regarding the Accused persons carrying firearms and other lethal weapons and assembling at the place of occurrence and using such firearms against the Deceased, etc, it was established beyond reasonable doubt that the common object of such unlawful assembly, in which the Appellant was also a member, was to commit murder of the Deceased. Hence, the Apex Court dismissed the Appeal and upheld the conviction of the surviving Accused, i.e. the Appellant- Gurmail Singh.