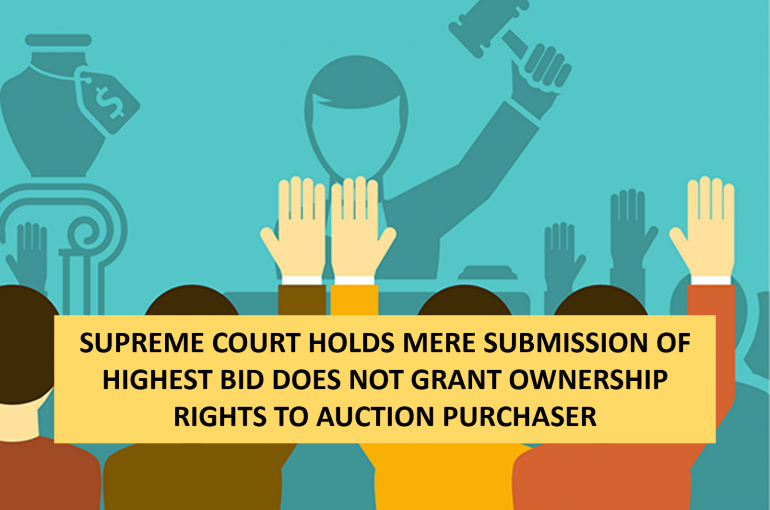 Recently, a two-Judge Bench of the Supreme Court in the Municipal Committee, Barwala, District Hisar, Haryana Through Its Secretary/President vs Jai Narayan And Company & Anr Civil Appeal No. 2222 of 2022 passed a Judgment dated 29-03-2022 and decided upon the issue of grant of ownership rights to auction purchaser in respect of a land acquired in a Government auction.

Aggrieved by the High Court Judgment dated 01-05-2018, the Defendant Committee filed a Civil Appeal before the Supreme Court.

The Apex Court passed a Judgment dated 29-03-2022 and made the following observations:

1) That Rule 2 of the Haryana Municipalities Management of Municipal Properties and State Properties Rules, 1976 (1976 Rules) provides that the Deputy Commissioner has to first grant sanction for sale by auction of proposed property and upon conducting such auction, the Defendant Committee has to apply to the Deputy Commissioner for sanction / confirmation of sale of proposed property to the acquirer / purchaser. Rule 2 of the 1976 Rules is reproduced below for easy reference:

(1)     A municipal committee proposing to alienate permanently or for a term exceeding ten years any land or other immovable property of which it is the owner shall apply to the Deputy Commissioner for sanction.

(2)     An application under sub-rule (1) shall be accompanied by a plan of the proposed property to be alienated together with a statement in Form A appended to these rules.

(3)     The Deputy Commissioner shall record an order on the application, –

(ii)      refusing to sanction it, provided that no sale by auction shall be valid, until it has been confirmed by the Deputy Commissioner.

4) Hence, there is no concluded contract between the Deputy Commissioner, Municipal Committee and the Plaintiff, as the Communication dated 10-01-2007 is merely an inter-departmental letter and not the decision of the State to grant approval for sale of Land to Plaintiff.

5) Thus, the Plaintiff has no vested right to file the suit for mandatory injunction and claim title and possession of the Land merely by participating in the Auction and submitting the highest bid. Secondly, even though the Plaintiff had a vested right, they could have only sought for specific performance of the so-called agreement by the Defendants.

6) Further, the Notice was sent by the Plaintiff in 2006 but the Suit was filed in 2011 in respect of the Auction conducted in the year 1995. As per Article 54 and 135 of the Schedule of the Limitation Act 1963, a suit for specific performance of a contract and a suit for mandatory injunction can be filed within 3 years from the date fixed for performance respectively. However, in this case, the Plaintiff filed the Suit for Mandatory Injunction on or after 13.6.2011, i.e., more than 12 years after the Auction was conducted. Hence, the Suit for Mandatory Injunction / Specific Performance are barred by limitation.

Thus, based on the aforesaid grounds, the Apex Court held that there is no concluded contract between the Plaintiff and the Defendant, hence, the Plaintiffs cannot seek specific performance / mandatory injunction against the Defendants and also, the Suit is barred by limitation. Hence, the Supreme Court allowed the Appeal and set aside the Trial Court Judgment dated 09-03-2016 and High Court Judgment dated 01-05-2018.