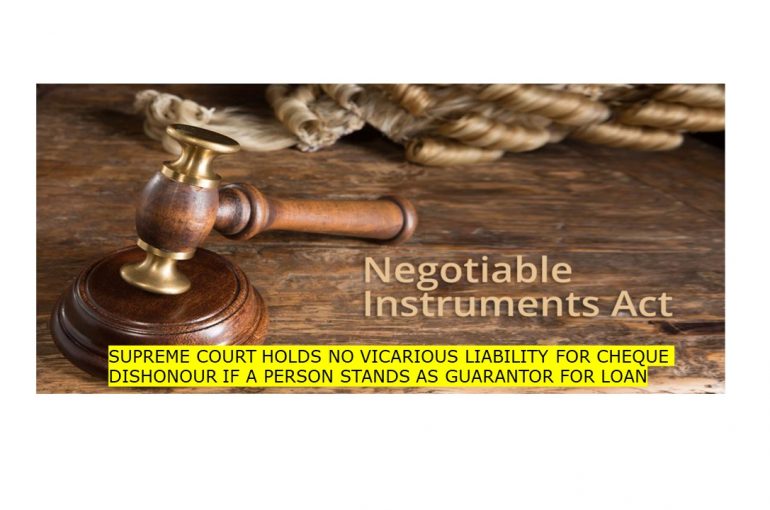 In a recent Criminal Appeal , a two judge Bench of the Supreme Court comprising of Justice Sanjeev Khanna and Justice Ajay Rastogi passed an Order and Judgement dated 09.05.2022 in ‘Dilip Hariramani vs. Bank Of Baroda ’ (Criminal Appeal No. 767 of 2022) and  set aside the Order and Judgement  dated 12.10.2020 (Impugned Order) passed by the Hon’ble High Court of Chhattisgarh and held that there is no vicarious liability for dishonour of cheque merely on the ground that the person was a partner or guarantor of the loan provided under Negotiable Instrument Act, 1881 (N.I Act).

In the present case, the Respondent- Bank of Baroda (Bank) advanced a term loan of Rs. 6,73,80,000/- to the Appellant- original Defendant (M/s Global Packaging) on 04.10.2012. For the part repayment of the loan the Appellant, through its Authorised Signatory issued 3 cheques dated 17.10.2015, 27.10.2015 and 31.10.2015 respectively amounting to Rs. 25,00,000/- each in favour of the Respondent Bank. On presentation of the aforesaid cheques, they were returned dishonoured due to insufficient funds. On 04.11.2015, the Respondent through its Bank Manager issued a Demand Notice to Simaiya Hariramani (Authorised Signatory) under Section 138 N.I Act.

On 07.12.2015, the Bank Manager filed a Complaint under Section 138 N.I Act against the Authorised Signatories and the Appellant, before the Court of Judicial Magistrate, Boladabazar, Chhattisgarh (Trial Court). After hearing both the parties, the Learned Trial Court vide Order and Judgement dated 19.02.2019 convicted both the Appellant and the Authorised Signatory and sentenced them to an imprisonment of 6 months. In addition to that, they were directed to pay a sum of Rs. 97,50,000/- as compensation under Section 357(3) of the Code of Criminal Procedure, 1973 (CrPC). An Appeal was preferred before the Learned Sessions Judge against the Order dated 19.02.2019. The Appeal vide Order dated 21.11.2019 was dismissed and the amount of compensation directed the Trial Court was enhanced from Rs. 97,50,000/- to Rs. 1,20,00,000/-.

The Appellant aggrieved by the Order dated 21.11.2019, preferred an Appeal before the Hon’ble High Court of Chhattisgarh. The High Court after hearing the contentions of both the parties, concluded that liability under the N.I Act is only upon the partners who are responsible for the Firm and for the conduct of its business. In the present case, both the Appellant and Authorised Signatory had furnished guarantees of the amount borrowed by the Firm from the Respondent, and thus the High Court dismissed their Appeal vide Order dated 12.10.2020 (Impugned Order).

The Supreme Court observed that the Appellant cannot be convicted merely because he was a partner of the Firm which had taken the loan or that he stood as a guarantor for such a loan. The Partnership Act, 1932 creates civil liability. Further, the guarantor’s liability under the Indian Contract Act, 1872 is a civil liability. The Appellant may have civil liability and may also be liable under the Recovery of Debts Due to Banks and Financial Institutions Act, 1993 and the Securitisation and Reconstruction of Financial Assets and Enforcement of Security Interest Act, 2002. However, vicarious liability in the criminal law in terms of Section 141 of the NI Act cannot be fastened because of the civil liability. The provisions of Section 141 impose vicarious liability by deeming fiction which presupposes and requires the commission of the offence by the company or Firm. Therefore, unless the company or Firm has committed the offence as a principal accused, the persons mentioned in sub-section (1) or (2) would not be liable and convicted as vicariously liable. Section 141 of the NI Act extends vicarious criminal liability to officers associated with the company or Firm when one of the twin requirements of Section 141 has been satisfied, which person(s) then, by deeming fiction, is made vicariously liable and punished. However, such vicarious liability arises only when the company or Firm commits the offence as the primary offender. The Apex Court also relied on the judgements in the case of Sharad Kumar Sanghi v. Sangita Rane (2015) 12 SCC 781, Himanshu v. B. Shivamurthy and Another (2019) 3 SCC 797, and Hindustan Unilever Limited v. State of Madhya Pradesh (2020) 10 SCC 751, where this view has been followed.

The Supreme Court, based on the above-discussed observations was of the opinion that the guarantor cannot be held liable for cheque that has bounced, as the guarantor is not directly involved, therefore the Apex Court allowed the Appeal and set aside the conviction of the Appellant/ Guarantor.