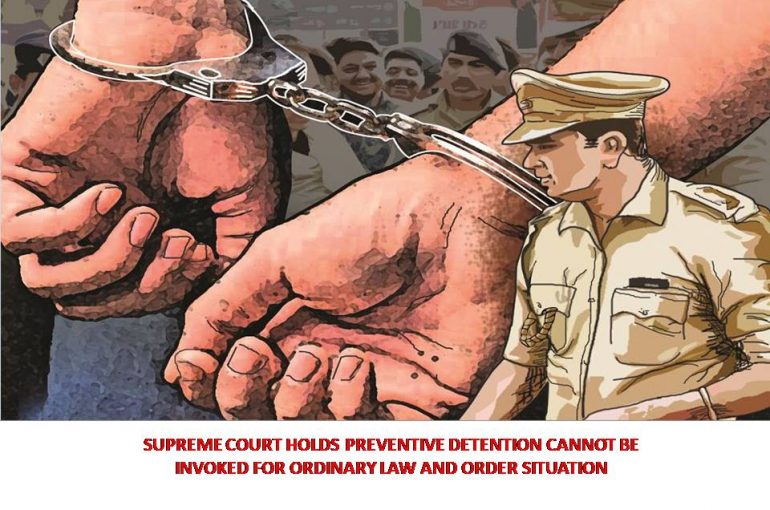 In a recent Criminal Appeal, the Supreme Court with a Coram comprising of Justice C.T. Ravikumar and Justice Sudhanshu Dhulia in the matter of Shaik Nazneen vs. State of Telangana and Ors. Civil Appeal No. 908 of 2022 vide Order dated 22.06.2022 has set aside the Order dated 25.03.2022 (Impugned Order) passed by the Hon’ble High Court of Judicature for the State of Telangana at Hyderabad in Habeas Corpus Petition No. 35519 of 2021 and held that preventive detention can’t be invoked for ordinary law and order situation.

In the present case, a Prevention Detention Order dated 28.10.2021 was passed by the Commissioner of Police, Rachakonda Commissionerate against the Detenu (Accused), husband of Shaik Nazneen (Appellant- original Petitioner), on the grounds that he was involved in chain snatching offences. It was further stated that the Accused was involved in as many as 36 gold chain snatching offences. It was also alleged that the Accused along with 3 others had formed a gang and had come to Hyderabad in a car with the sole motive of committing the offence of chain snatching.

Generally, the term Preventive Detention means the imprisonment of a person with the aim of preventing them from committing further offences or for maintaining public order.

Although as per the Authorities, the Accused was involved in more than 30 cases but only 4 cases of chain snatching were considered as ground for detention, as other cases were reported to be behind the proximity period and out of jurisdiction of Commissionerate. The FIRs against the Accused were primarily pertaining to an offence under Section 392 (Punishment for robbery) of the Indian Penal Code, 1860 and Detention Order also states that the crimes were committed in broad daylight and have thus resulted in creation of fear and panic in the minds of general public, especially women, hence the Government had to interfere in order to ‘maintain public order’.

That the aforesaid 4 cases were allegedly committed by the Accused within a span of 2 months between 06.05.2021 and 26.07.2021 and were committed within the jurisdiction of one police station i.e Medipalli Police Station. In all the above mentioned cases, the Accused was granted ‘default bail’ under Section 167 (2) of the Code of Criminal Procedure, 1973 and was released on 16.10.2021. Since 28.10.21, the Accused has been under detention. The powers have been exercised in the present case under Section 3 (1) of Telangana Prevention of Dangerous Activities of BootLeggers, Dacoits, Drug-Offenders, Goondas, Immoral Traffic Offenders Land-Grabbers, Spurious Seed Offenders, Insecticide Offenders, Fertiliser Offenders, Food Adulteration Offenders, Fake Document Offenders, Scheduled Commodities Offenders, Forest Offenders, Gaming Offenders, Sexual Offenders, Explosive Substances Offenders, Arms Offenders, Cyber Crime Offenders and White Collar or Financial Offenders Act, 1986, (hereinafter referred to as Act), as the Accused has been declared as a habitual offender and thus ‘goonda’ vide Detention Order dated 28.10.2021.

As per Section 3 (1) of the Act a detention order can be passed against a ‘goonda’. The Hon’ble Apex Court observed that, a bare reading of the aforesaid provision shows that the “maintenance of public order” has a crucial bearing here and unless the government is justified in holding that the act of the Accused is prejudicial to the maintenance of public order, the preventive detention would be bad and would be in violation of Articles 21 and 22 of the Constitution of India as it encroaches upon the liberty and freedom of an individual.

The Counsel for the Petitioner confined his arguments to 2 main aspects. Firstly, the Accused had been granted bail, as the Prosecution failed to file the chargesheet in time and now they cannot resort to the law of prevention detention. And secondly, even assuming the allegations of the Prosecution to be correct, then also it only reflects a ‘Law and Order’ problem and not a ‘Public Order’ problem as mentioned under the Act.

The Supreme Court further held that there is absolutely no doubt in its mind that the facts and circumstances of the case as alleged in the Detention Order dated 28.10.2021 reflect a law and order situation which can be dealt with under the ordinary law of land, and that there was absolutely no occasion for invoking the extraordinary powers under the law of Preventive Detention. The Apex Court after hearing the respective Counsels held that, the Preventive Detention Law against the Accused was not justified and that the powers which have been given to the government for its exercise in an exceptional situation as it strikes hard on the freedom and liberty of an individual, and thus cannot be exercised in a routine manner.