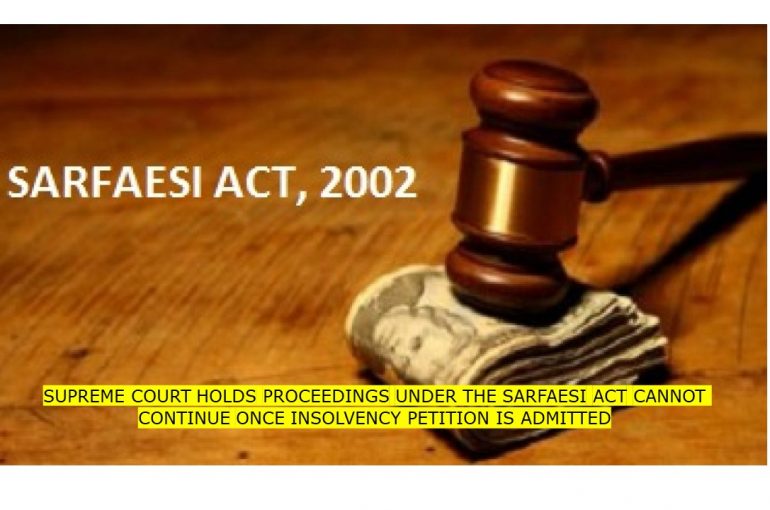 A Two-Judge Bench of the Supreme Court comprising of Justice L. Nageswara Rao and Justice B R Gavai, while deciding the case of Indian Overseas Bank vs RCM Infrastructure Ltd. and Another, CIVIL APPEAL NO. 4750 OF 2021, passed a Judgement dated 18.05.2022 and held that the proceedings under the Securitization and Reconstruction of Financial Assets and Enforcement of Security Interest Act, 2002 (SARFAESI Act) cannot continue once the Corporate Insolvency Resolution Process (CIRP) is commenced/admitted and the moratorium is ordered under the Insolvency and Bankruptcy Code (IBC).

In this case, the Appellant – Indian Overseas Bank had extended certain credit facilities to the Respondent, RCM Infrastructure Ltd (Corporate Debtor). However, the Corporate Debtor failed to repay the dues. As such, on 13.06.2016, the loan account of the Corporate Debtor came to be classified as “Non-Performing Asset” (NPA). The Bank took symbolic possession of two secured assets mortgaged exclusively with it in exercise of powers conferred on it under Section 13(4) of the SARFAESI Act. The Bank issued a Notice for e-Auction to recover the public money availed by the Corporate Debtor on 27.09.2018. On 22.10.2018, the Corporate Debtor filed a Petition under Section 10 of the Insolvency and Bankruptcy Code, 2016 (“the IBC”) before the National Company Law Tribunal (NCLT), New Delhi. Meanwhile, on 13.12.2018, the sale was confirmed in favour of the successful bidders in the public auction under SARFAESI Act. The successful bidders deposited 25% of the bid amount. On the other hand, the NCLT admitted the IBC Petition on 03.01.2019 and a moratorium (a cooling period where there is no judicial proceeding against corporate debtors) was also notified. But even thereafter, the Bank continued the auction proceedings and accepted the balance 75% of the bid amount and completed the sale. The NCLT vide Order dated 15.07.2020, allowed the Application filed by the Corporate Debtor and set aside the sale conducted by Bank under SARFAESI Act. The Bank filed an Appeal before the National Company Law Appellate Tribunal (NCLAT), which was dismissed vide Order dated 26.03.2021. The Bank thus preferred an Appeal before the Supreme Court.

The Supreme Court in this case further held that the balance amount was accepted by the Appellant Bank on 08.03.2019. However, the sale under the statutory scheme as contemplated under Rules 8 and 9 of the Security Interest (Enforcement) Rules, 2002 would be deemed to have stand completed only on 08.03.2019. Admittedly, this date falls much after 03.01.2019, i.e., on which date CIRP commenced and moratorium was ordered. The Apex Court held that since the provisions of Section 14(1)(c) of the IBC, which have overriding effect over any other law, any action to foreclose, recover or enforce any security interest created by the Corporate Debtor in respect of its property including any action under the SARFAESI Act is prohibited, therefore, the Supreme Court held that the Appellant Bank could not have continued the proceedings under the SARFAESI Act once the CIRP was initiated and the moratorium was ordered. Hence, the NCLAT Judgement dated 26.03.2021 was upheld and as a result, the Appeal was dismissed.