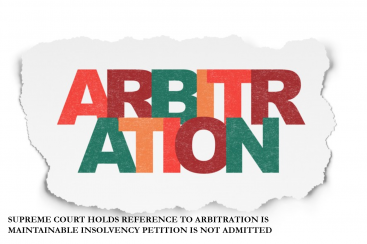 Recently, the three-Judges Bench of the #SupremeCourt of India in the case of Indus Biotech Private Limited vs. Kotak India Venture (Offshore) Fund [Arb. Petition (Civil) 48/2019], vide Judgment dated 26.03.2021 held that #Arbitration Reference under Section 8 of the Arbitration and Conciliation Act, 1996 ( the ‘Act of 1996’), is not maintainable if it has been filed after admission of Insolvency Resolution Application under Section 7 of the Insolvency and Bankruptcy Code, 2016 (‘#IBC’).

The Respondents under the Share Subscription and Shareholders’ Agreements and the Supplemental Agreements subscribed to equity shares and Optionally Convertible Redeemable Preference Shares (‘OCRPS’) in the Petitioner’s Company.

The Petitioner Company decided to make a Qualified Initial Public Offering (‘QIPO’). But as per Regulation 5(2) of Securities and Exchange Board of India (Issue of Capital and Disclosure Requirements), Regulations 2018 (‘SEBI Regulations’), which provides that a company is not eligible to make QIPO, if it has any convertible securities that would entitle others with an option to receive equity shares of the issuer company. In this regard, it became necessary for the Respondents which had subscribed to the OCRPS in the Petitioner Company to convert their respective preference shares into equity shares.

The Petitioner filed an Arbitration Petition before the Supreme Court of India under Section 11(3) read with Sections 11(4) (a) and 11(12)(a) of Act of 1996 seeking the appointment of an Arbitrator and constitution of the Arbitral Tribunal.

The Respondents objected the NCLT Order dated 09.06.2020 before the Supreme Court and contended that the NCLT is bound to proceed in accordance with provisions of the IBC when any Application is filed under Section 7 of the IBC.

The issue before the Supreme Court was whether the NCLT was justified in dismissing the insolvency proceedings and referring the matter for Arbitration.

In view of the aforesaid case, the Supreme Court observed that a dispute will be non-arbitrable when a proceeding is in rem and IBC proceedings are to be considered in rem only when the petition is admitted.

Similarly, the Supreme Court held that any proceeding which is admitted by the Adjudicating Authority under Section 7 of the IBC deciding the presence of default and the debt being due from the corporate debtor then thereafter any Application under Section 8 of the Act of 1996 will not be maintainable.

The Supreme Court reconsidered the observations recorded in the NCLT Order dated 09.06.2020 and upheld the said Order in view of the fact that by dismissing the Application under Section 7 of the IBC, the NCLT has decided that there is no ‘default’ caused by the Petitioner.

In this view, the Supreme Court proceeded to constitute the Arbitration Tribunal for adjudication of the disputes between the Parties.