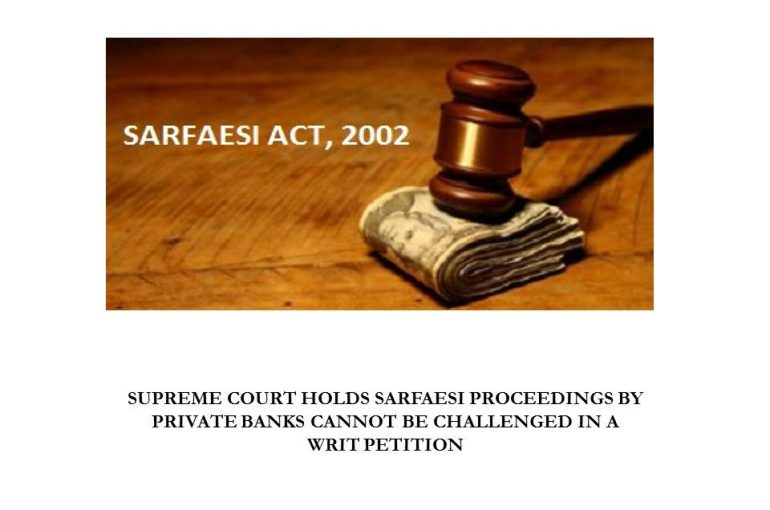 A Two Judge Bench of the Hon’ble Supreme Court of India comprising of Justices M.R. Shah and B.V. Nagarathna passed a Judgment dated 12-01-2022 in the case of Phoenix ARC Private Limited Vs Vishwa Bharati Vidya Mandir & Ors. {Civil Appeal Nos. 257-259 of 2022} and observed that “If proceedings are initiated under the SARFAESI Act and/or any proposed action is to be taken and the borrower is aggrieved by any of the actions of the private bank/bank/ARC, borrower has to avail the remedy under the SARFAESI Act and no writ petition would lie and/or is maintainable and/or entertainable.”

In the instant case, one Vishwa Bharati Vidya Mandir (hereinafter Respondent No. 1/Borrower) who was running educational institutions and is a Society registered under the Karnataka Societies Registration Act, 1960 availed credit facilities to the tune of Rs.1,05,60,84,000/ from Saraswat Cooperative Bank Limited (Bank). Similarly, one St. Ann’s Education Society (Borrower) had also availed credit facilities to the tune of Rs.20,05,00,000/- from the aforesaid Bank. In order to secure the loans/security documents including personal guarantees were executed in favour of the Bank. With respect to the mortgaged properties, an equitable mortgage by way of deposit of title deeds over the immovable properties was also created by the Borrowers. There was a default committed by the Borrowers in repayment of the outstanding dues in April, 2013 and the accounts of the Borrowers were classified as a “Nonperforming Asset” (NPA) by the Bank. Subsequently, the Bank issued a Notice dated 01.06.2013 under Section 13(2) of the Securitization and Reconstruction of Financial Assets and Enforcement of Securities Interest Act, 2002 (SARFAESI Act).

Against the Letter dated 13.08.2015, the Borrowers filed Writ Petitions under Article 226 of the Constitution of India before the High Court of Karnataka at Bengaluru (High Court) being Writ Petition Nos. 35564-35566 of 2015, on the ground that the Letter dated 13.08.2015 is a Possession Notice under Section 13(4) of the SARFAESI Act, which is in violation of Rule 8(1) of the Security Interest (Enforcement) Rules, 2002 (Rules) and without publication of Possession Notice in two leading newspapers as required under Rule 8(2).

The High Court vide Order dated 26.08.2015 passed an ex-parte ad-interim Order and directed that the status quo to be maintained with regard to possession of the mortgaged properties subject to the Borrowers making a payment of Rs. 1 Crore with the Appellant.

The Appellant opposed the Writ Petitions and contended that the same are not maintainable. The Appellant also filed an Application being I.A. No. 01 of 2016 for vacation of the ex-parte ad-interim Order dated 26.08.2015. However, the High Court instead of deciding the Application for vacating the Interim Order, the High Court extended the Interim Order on 28.02.2017 on the condition that the Borrowers shall deposit a further sum of Rs.1 Crore.

Aggrieved and dissatisfied, the Appellant approached the Hon’ble Supreme Court of India. After taking into consideration the facts of the case and the Arguments advanced by the Parties to the dispute, the Bench observed that a Writ Petition challenging proceedings under SARFAESI Act initiated by Private Banks/Asset Reconstruction Companies is not maintainable. The Apex Court said that the activity of the Bank/ARC (i.e. lending money to the Borrowers) cannot be termed as a public function which is normally expected to be performed by the State Authorities.

Agreeing with the contentions raised by the Appellant that the Writ Petitions against the Private Party and against the communication proposing to take action under the SARFAESI Act would not be maintainable, the Supreme Court held as follows:

“12. Even otherwise, it is required to be noted that a writ petition against the private financial institution – ARC – appellant herein under Article 226 of the Constitution of India against the proposed action/actions under Section 13(4) of the SARFAESI Act can be said to be not maintainable. In the present case, the ARC proposed to take action/actions under the SARFAESI Act to recover the borrowed amount as a secured creditor. The ARC as such cannot be said to be performing public functions which are normally expected to be performed by the State authorities. During the course of a commercial transaction and under the contract, the bank/ARC lent the money to the borrowers herein and therefore the said activity of the bank/ARC cannot be said to be as performing a public function which is normally expected to be performed by the State authorities. If proceedings are initiated under the SARFAESI Act and/or any proposed action is to be taken and the borrower is aggrieved by any of the actions of the private bank/bank/ARC, borrower has to avail the remedy under the SARFAESI Act and no writ petition would lie and/or is maintainable and/or entertainable.”

The Bench observed that the Writ Petitions by the Borrowers before the High Court is an abuse of process of the Court and therefore, allowed the Appeals.

The Apex Court by this Judgment has now closed the door on several frivolous litigation initiated by the Borrowers to defeat the system of recovery. In most cases where there is huge borrowings, borrowers who have defaulted always try to find ways to escape their liability which is not fair as it is public money. In my view, if bankers are careful while giving loans they can actually prevent several such commercial frauds that happen day in and day out.