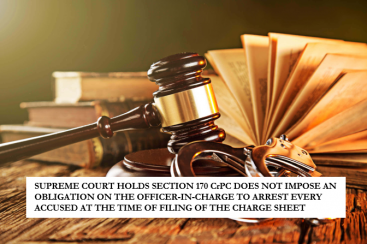 A Two Judge Bench of the Hon’ble #SupremeCourt of India comprising of Justices Sanjay Kishan Kaul and Hrishikesh Roy passed an Order dated 16-08-2021 in the case of Siddharth v. State of U.P. Criminal Appeal No.838 Of 2021 (Arising out of SLP(Crl.) No.5442/2021) and held that Section 170 Code of Criminal Procedure 1973 (#CrPC) does not impose an #obligation on the officer-in-charge to #arrest each and every #accused at the time of filing of the #chargesheet.

In the present case, one Siddharth (Appellant) along with 83 other private persons were sought to be named as Accused in a FIR which was registered seven years ago. The Appellant was a supplier of stones to U.P. Rajya Nirman Ltd., and was booked under Section 409 and Section 120-B of the Indian Penal Code, 1860. The Appellant had already joined the investigation and the charge sheet was ready to be filed and an arrest memo was issued against him. The Trial Court observed that unless the person is taken into custody, the charge sheet will not be taken on record in view of Section 170 of the Criminal Procedure Code (CrPC).

For reference, Section 170 of CrPc is reproduced as follows:

“170. Cases to be sent to Magistrate, when evidence is sufficient. – (1) If, upon an investigation under this Chapter, it appears to the officer in charge of the police station that there is sufficient evidence or reasonable ground as aforesaid, such officer shall forward the accused under custody to a Magistrate empowered to take cognizance of the offence upon a police report and to try the accused or commit him for trial, or, if the offence is bailable and the accused is able to give security, shall take security from him for his appearance before such Magistrate on a day fixed and for his attendance from day to day before such Magistrate until otherwise directed.”

The Appellant had filed an Application for Anticipatory Bail before the High Court of Allahabad (High Court), which was subsequently rejected vide Order dated 09-07-2021. Aggrieved the Appellant approached the Hon’ble Supreme of India.

The main contention before the Apex Court was whether the Application for anticipatory bail ought to have been allowed. After taking into consideration the arguments advanced by the Parties to the dispute, the Bench while placing reliance upon several Judgments of High Court of Delhi and High Court of Gujarat observed that Section 170 CrPC does not impose an obligation on the officer-in-charge to arrest each and every accused at the time of filing of the charge sheet.

The Apex Court also placed reliance on the case of Joginder Kumar v. State of U.P., (1994) 4 SCC 260, the Court reiterated that merely because an arrest can be made because it is lawful does not mandate that arrest must be made. In this regard the following observation was made:

“We may note that personal liberty is an important aspect of our constitutional mandate. The occasion to arrest an accused during investigation arises when custodial investigation becomes necessary or it is a heinous crime or where there is a possibility of influencing the witnesses or accused may abscond. Merely because an arrest can be made because it is lawful does not mandate that arrest must be made. A distinction must be made between the existence of the power to arrest and the justification for exercise of it.”

While setting aside the Impugned Order dated 09-07-2021, the Apex Court in the instant case observed that the Appellant joined the investigation when it was already completed, and he was roped in after seven years of registration of the FIR. The Appellant had also stated that on summons being issued the Appellant will put the appearance before the Trial Court. Hence, the Appeal was allowed.