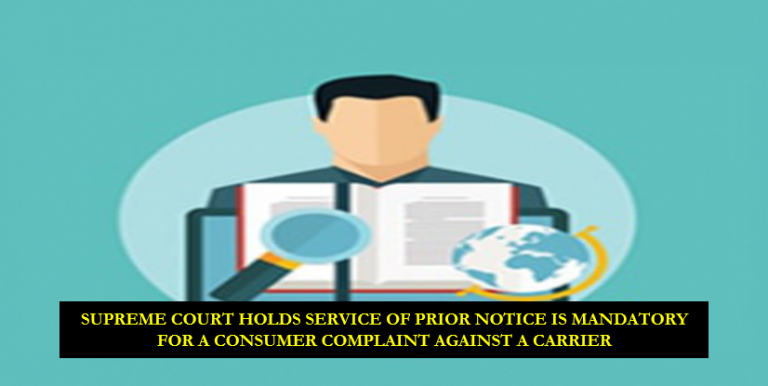 A Two Judge Bench of the Hon’ble #SupremeCourt of India comprising of Justices Hemant Gupta and A.S. Bopanna passed an Order dated 17-08-2021 in the case of M/s Associated Road Carriers Ltd. v. M/s Kamlender Kashyap & Ors. Civil Appeal Nos. 4412-4413 of 2010 and held that that a #consumercomplaint against a carrier is not maintainable if prior Notice under Section 10 of the #CarriersAct, 1865, (Act) is not served on it.

Aggrieved, the Appellant filed an Appeal in the Hon’ble Supreme Court of India contending that as per Section 10 of the Act no prior Notice was served upon it and therefore, the Complaint before the Consumer Fora was not maintainable.

The Carriers Act, 1865 is legislation which deals with rights and liabilities of Common Carriers. In the Act, “Common Carriers” has been defined as “a person, other than the Government, engaged in the business of transporting property under multimodal transport document or of transporting for hire property from place to place, by land or inland navigation, for all persons indiscriminately.”

Section 10 of the Carriers Act, 1865 is reproduced as below:

The Appellant placed reliance on the case of Arvind Mills Ltd. v. Associated Roadways (2004) 11 SCC 545. In this case, the Apex Court had made the following observation regarding the requirement to serve Notice under Section 10 of the Act.

The Bench after taking into consideration the arguments advanced by the Parties to the dispute held that since the consignment was booked in the year 1997, it will not interfere with impugned Order dated 10.01.2008 passed by the NCDRC. In this regard, the Apex Court observed as follows:

“…keeping in view the fact that the consignment was booked in the year 1997, it is too late in the day to relegate the parties to meet out the requirement of notice under Section 10 of the Carriers Act. The parties have contested the proceedings on merits and the State Commission as well as the NCDRC have returned a finding of fact that the appellant was deficient in providing service.”

Thus, while observing that a prior Notice is mandatory under Section 10 of the Act, the Court did not interfere with the Order passed by the NCDRC and dismissed the Appeal. The Court probably balanced the equities by dismissing the Appeal as too much time had passed since initiation of the litigation since 1997.