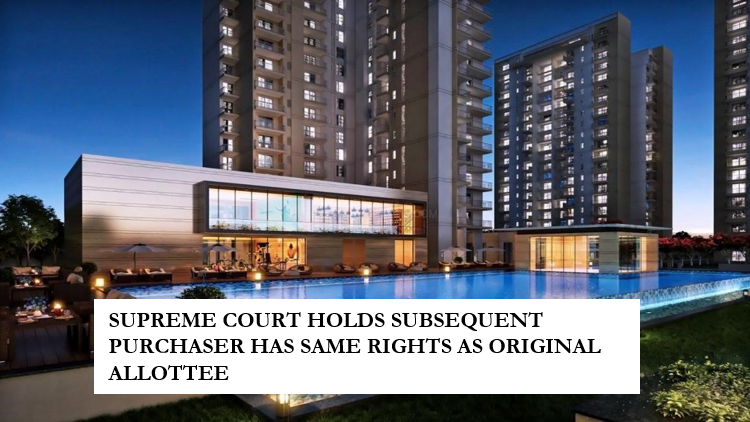 The #SupremeCourt has in a recent case of M/s Laureate Buildwell Pvt. Ltd. vs. Charanjeet Singh passed an Order 22-07-2021, where the Apex Court decided upon the issue of #nature and #relief of an #originalallottee and a #subsequentpurchaser of a #flat that is yet to be completed by a #builder.

In this case, Ms. Madhabi Venkatraman (Original Allottee) applied for allotment of a residential flat No. 7013 admeasuring 4545 sq. ft., in Nectarine Tower “PARX LAUREATE” at Sector- 108, Expressway, Noida (Flat) on 29-08-2012. The Flat was under construction by the builder, M/s Laureate Buildwell Pvt. Ltd. (Builder). The Original Allottee paid the registration amount of Rs. 7,00,000/- and further deposit of Rs. 32,33,657/- out of the total sale consideration of Rs. 2,47,29,405/- for the said Flat. Thereafter, the Builder issued an Allotment Letter dated 16-10-2012, which stated that the possession of the new Flat would be handed over to the Original Allottee within 36 months of the issue of Allotment Letter, i.e. on or before 15-10-2015. Thereafter, the Original Allottee made payment of the first 7 instalments to the tune of Rs. 1,55,89,329/- to the Builder (Paid Amount). However, when the Original Allottee observed the slow pace of construction of the Flat in February 2015, she decided to sell the Flat to a third party.

Aggrieved, the Subsequent Purchaser approached the National Consumer Dispute Redressal Commission (NCDRC) seeking directions to the Builder to refund Rs. 1,93,70,883/- with 24% interest along with compensation and costs, etc. The Builder pleaded that as there was a complete slowdown in the construction of projects in NOIDA, which is beyond the control of the parties, the construction of the Flat got delayed. Further, that the rights of a subsequent purchaser are not the same as an original allottee on the ground that at the time of subsequent purchase or re-allotment, the Subsequent Purchaser was aware about the slow market conditions and by agreeing to execute the Agreement to Sell and later, the Endorsement Letter dated 09-04-2016, the Subsequent Purchaser had accepted the potential delay in construction.

The NCDRC vide Order dated 29-05-2019 held that a flat purchaser cannot be made to wait indefinitely for seeking possession. Even in the instant case, though the promised date of delivery was way back in the year 2015, even as on date, the tower is far from completion. Hence, the NCDRC directed the Builder to refund the amount so far deposited at 10 % interest till date of realisation. Aggrieved by the NCDRC Order dated 29-05-2019, the Appellant-Builder filed an Appeal before the Supreme Court.

The Apex Court made the following observations in this case:

1) That at times, original allottees seek funding from banks/financial institutions to finance their flat by mortgaging the property, etc. In some cases, they have to start repaying instalments towards loan and interest after a certain period of time, even before the flats are ready. So, if real estate projects are allowed to be prolonged for an indefinite period, it would have serious economic repercussions upon such original allottees. Hence, at times, the original allottees prefer to look for purchasers who are ready to step into their shoes. In such cases, the subsequent purchasers take over the obligations of the original allottee including payment of balance instalments. Thus, subsequent purchasers are also deemed to be consumers under Section 2 (7) of the Consumer Protection Act 2019.

4) That in the Agreement to Sell and the Endorsement Letter dated 09-04-2016 it was agreed that the Builder would give timely delivery of possession of Flat to the Respondent. However, the Builder has not been able to even obtain the occupancy certificate as on the date of filing of the Appeal.

Thus, the Supreme Court upheld the NCDRC Order dated 29-05-2019 and directed the Appellant-Builder to refund the principal amounts along with 9% interest to the Respondent in the interest of justice.