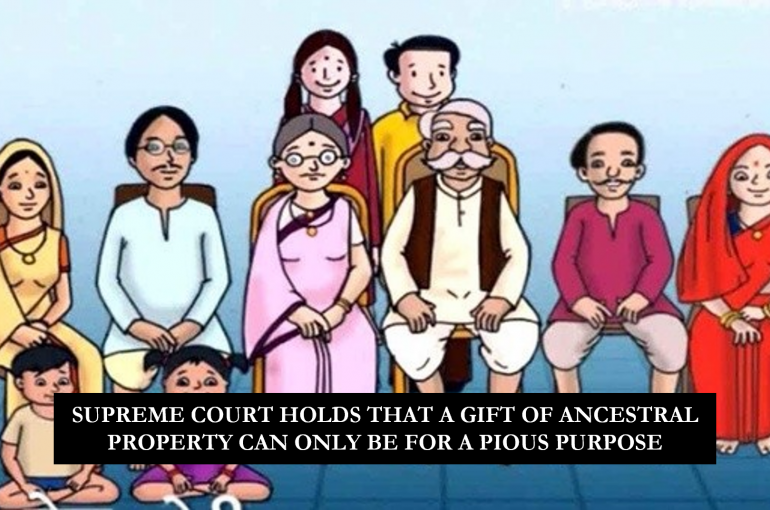 A Division Bench of the Hon’ble Supreme Court of India comprising of Justice S. Abdul Nazeer and Justice Krishna Murari passed a Judgment dated 19-04-2022 in the case of K.C. Laxmana v. K.C. Chandrappa Gowda & Anr. (Civil Appeal No. 2582 of 2010) and held that a Gift Deed in regard to ancestral property executed ‘out of love and affection’ does not come within the ambit of ‘pious purpose’.

In the present case, one K.C. Chandrappa Gowda (hereinafter referred to as Plaintiff) filed a Suit against his father K.S. Chinne Gowda (first Defendant) and one K.C. Laxmana (second Defendant) for partition and separate possession of his one­third share in the Suit­Schedule Property and also for a declaration that the Gift/Settlement Deed dated 22-03-1980 (Ex. P­1) executed by the first Defendant in favour of the second Defendant as null and void.

According to the Plaintiff the scheduled property belonged to the joint family consisting of   himself, the   first   defendant   and   one   K.C. Subraya Gowda (other son). Therefore, it was contended that the first Defendant had no right to transfer the scheduled property in favour of the second Defendant as he was not a coparcener or a member of their family. As a result of which the alienation made without the consent of the Plaintiff was null and void and thus not binding on him.

In response to the Suit filed by the Plaintiff, the first Defendant filed his written statements and averred that although the Suit­Scheduled Property was a joint family property, the second Defendant was brought up by the first Defendant and out of love and affection he settled the suit property under Ex.P­1 in favour of the second Defendant. Further, it was also contended that the joint family property was already partitioned between the first Defendant, the Plaintiff and the other son­ Subbraya Gowda on 23-03-1990 and the Plaintiff who has already taken his share in the Suit­Scheduled Property is not entitled to maintain the Suit. The Trial Court, on appreciation of the materials on record, dismissed the Suit. Feeling aggrieved, the Plaintiff filed a first Appeal before the High Court of Karnataka at Bangalore (High Court). The Appellate Court after reconsideration of the entire materials on record and re­assessment of evidence, set aside the Judgment passed by the Trial Court. It was held that the Settlement Deed at Exhibit P­1 is a void document. The Plaintiff was granted one­ third share in the Suit­Scheduled Property.

The second Defendant challenged the Judgment of the Appellate Court by filing a Second Appeal No. 372   of   2003 before the High Court. The High Court, after hearing the Parties to the dispute and on consideration of the materials on record, dismissed the Appeal vide Impugned Order dated 03-10-2008.

Assailing Impugned Order dated 03-10-2008, a Special Leave Petition was filed before the Hon’ble Supreme Court of India. After perusing the facts of the case, the issue that arose before the Apex Court was whether the transfer of property made by the first Defendant in favour of the Second Defendant was for a pious purpose?

The Bench observed that:

The Bench further observed that the Gift Deed was executed by the first Defendant in favour of the second Defendant ‘out of love and affection’. In this regard, the following was held:

“It is well­settled that a Hindu father or any other managing member of a HUF has power to make a gift of ancestral property only for a ‘pious purpose’ and what is understood by the term   ‘pious purpose’ is a gift for charitable and/or religious purpose. Therefore, a deed of gift in regard to the ancestral property executed ‘out of love and affection’ does not come within the scope of the term ‘pious purpose’.  It is irrelevant if such gift or settlement was made by a donor, i.e. the first defendant, in favour of a donee who was raised by the donor without any relationship, i.e. the second defendant.”

The Supreme Court therefore held that in this case the Gift Deed is not for any charitable or religious purpose, and therefore the said Gift Deed does not fall within the definition of ‘pious purpose’ and based on this reasoning dismissed the Appeal.