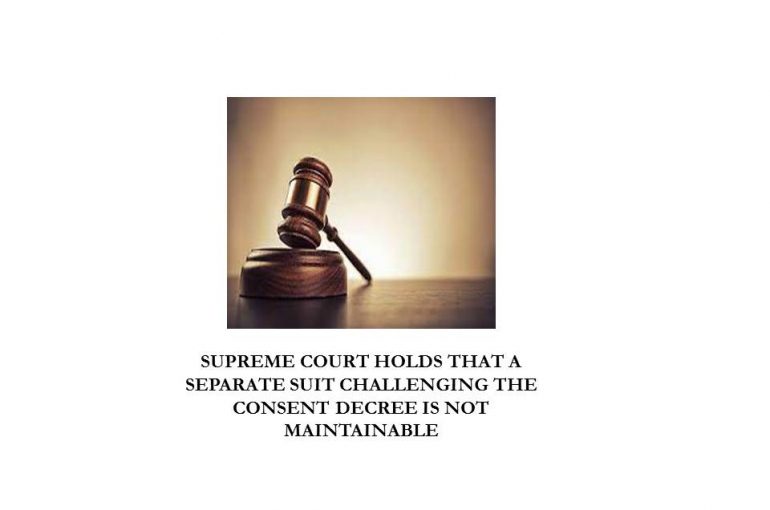 A Two Judge Bench of the Hon’ble Supreme Court of India comprising of Justices M.R. Shah and Sanjiv Khanna passed a Judgment dated 09-02-2022 in the case of M/s. Sree Surya Developers and Promoters Vs N. Sailesh Prasad and Ors. {Civil Appeal No. 439 of 2022} and held that a separate Suit challenging the Consent Decree is not maintainable under law.

In the present case, the Paternal Grandfather (Respondent No. 2 and Original Defendant in O.S. No. 537 of 2018) gifted a Suit Schedule Property to Respondent No. 1 (Original Plaintiff) during his minority vide registered Gift Deed dated 13-02-2003. The said Settlement Deed was revoked vide Revocation of Gift Deed dated 10-12-2004 by the Grandmother of the Respondent No.1. Thereafter, a registered Development Agreement-cum General Power of Attorney dated 18-01-2008 was executed between the Grandmother of the Plaintiff and M/s. Sree Surya Developers and Promoters (Appellant and Original Defendant No.2). As per the Agreement, the Grandmother was entitled to 35,000 sq. ft. of fixed saleable super built-up area along with proportionate number of car parking spaces and undivided share in the land.

Subsequently, father of Respondent No. 1 (Respondent No. 3 and Defendant No.3 in O.S. No.537 of 2018) filed a suit for permanent injunction, being O.S. No.1750 of 2015, in the capacity of next friend of then minor Respondent No.1 seeking declaration that revocation of Gift Deed dated 10-04-2004 is illegal and non-binding on the Plaintiff. Thereafter, a compromise was arrived at between the Parties to O.S. No.1750 of 2015 vide Compromise Deed Dated 30-12-2015 wherein it was agreed that the Respondent No. 1 would be entitled to entire 35,000 sq. ft. of the constructed area and which was agreed to be allocated to the Grandmother under the Development Agreement. Further, it was agreed that according to the Compromise Decree that the Developer would be entitled to assign the development rights accrued to it under the said Development Agreement to the third parties. In furtherance to this, I.A. No.31 of 2016 under Order XXIII Rule 3 Civil Procedure Code (CPC) was filed along with the Compromise Memo praying for passing of a Decree. Respondent No. 3 filed I.A. in the said Suit under Rule 172 of the Civil Rules of Practice and sought permission to act on behalf of the Respondent No.1 herein and the Trial Court permitted the same.

The Compromise Decree was passed by the VIII Additional Senior Civil Judge, RR District on 13-01-2016 in O.S. No.1750 of 2015. Thereafter, the Appellant – Developer assigned its development rights under Development Agreement to Respondent No.4 under a Deed of Assignment dated 06-04-2016 and on the basis of the same, Respondent No.4 started developing the subject property in O.S. No.537 of 2018.

On attaining the age of majority, Respondent No.1 filed the present Suit being O.S. No.537 of 2018 through his General Power of Attorney praying inter alia declaration of right, title and interest over the Suit Schedule Property and declaration of Compromise Decree being valid.

The Trial Court vide Order dated 02-05-2019 allowed the said I.A. thereby rejecting the Plaint on the ground that in view of Order XIII Rule 3A CPC, no independent Suit would be maintainable against the Compromise Decree.

Aggrieved, an Appeal was filed by the Respondent No. 1 in the High Court for the State of Telangana at Hyderabad (High Court) being Appeal Suit No.454 of 2019. The High Court allowed the said Appeal and quashed and set aside the Order passed by the learned II Additional District Judge, Ranga Reddy District dated 02-05-2019 in I.A. No.108 of 2019 in O.S. No.537 of 2018 by which the Ld. Trial Court rejected the Plaint under Order 7 Rule 11(d) of the CPC.

The High Court while quashing the Order observed that “the effect of the provisions of Order XXXII Rules 1 to 7 CPC has not been considered by the Trial court, which would have a direct bearing on the validity of the Compromise Decree dated 13.01.2016 in O.S. No.1750 of 2015.”

Impugning the Judgment and Order passed by the High court, the Original Defendant Nos. 2 and 4, Developer and its Assignee preferred Appeals in the Hon’ble Supreme Court of India.

After taking into consideration the facts of the case and the arguments advanced by the Parties to the dispute, the Apex Court observed that “a Party to a consent decree based on a compromise to challenge the compromise decree on the ground that the decree was not lawful i.e., it was void or voidable has to approach the same court, which recorded the compromise and a separate suit challenging the consent decree has been held to be not maintainable.”

Furthermore, the Bench while placing reliance on the case of R. Janakiammal Vs. S.K. Kumarasamy, (2021) 9 SCC 114 noted that “It is observed and held by this Court that Rule 3A of Order XXIII bars the suit to set aside the decree on the ground that the compromise on which decree was passed was not lawful. It is further observed and held that an agreement or compromise which is clearly void or voidable shall not be deemed to be lawful and the bar under Rule 3A shall be attracted if compromise on the basis of which the decree was passed was void or voidable. In this case, this Court had occasion to consider in detail Order XXIII Rule 3 as well as Rule 3A.”

Therefore, the Apex Court concluded that the Trial Court was justified in rejecting the Plaint on the ground that the Suit for the Reliefs sought, challenging the Compromise Decree was not maintainable, and thereby restoring the Order of the Trial Court dated 02-05-2019 in I.A. No.108 of 2019 in O.S. No. 537 of 2018.