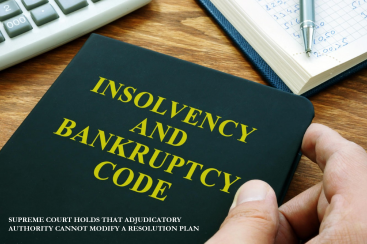 The Three Judge Bench of the Hon’ble #SupremeCourt of India comprising of Justices A.M. Khanwilkar, Dinesh Maheshwari and Sanjiv Khanna passed a Judgment dated 24.03.2021 in the case of Jaypee Kensington Boulevard Apartments Welfare Association & Ors. v. NBCC (India) Ltd. & Ors. {Civil Appeal No. 3395 of 2020} and held that #AdjudicatingAuthority under Insolvency and Bankruptcy Code, 2016 (IBC) may disapprove #resolutionplan submitted by the Committee of Creditors (#CoC) but cannot modify it.

In the present case, the Corporate Insolvency Resolution Process (CIRP) of the Corporate Debtor, Jaypee Infratech Limited (JIL) was initiated on 09.08.2017 by one of the Financial Creditors, IDBI Bank Limited under Section 7 of IBC in the National Company Law Tribunal, Allahabad Bench (Bench).

Vide Order dated 03.03.2020, the Adjudicating Authority (NCLT) approved the Resolution Plan with some modifications and certain directions. The NCLT accepted some of the objections such as those of the dissenting financial creditor bank and the land providing agency, and rejected some others, including those of Jaiprakash Associates Limited (JPA), the holding company of JIL.

Thereafter, an Appeal was preferred by the Respondent against the Order dated 03.03.2020 passed by the NCLT, New Delhi before the Appellate Authority (NCLAT), which passed an Interim Order dated 22.04.2020 approving the Resolution Plan and also provided that IRP may constitute an ‘Interim Monitoring Authority’.

Against the aforesaid Order dated 22.04.2020 passed by the NCLAT, six Associations of homebuyers and a few individual homebuyers moved the Apex Court seeking permission to maintain their Appeals under Section 62 of IBC.

One of the issues that arose before the Bench was about the “extent of, and limitations over the powers and jurisdiction of the Adjudicating Authority while dealing with the resolution plan approved by the Committee of Creditors.”

While placing reliance on various Judgments passed by the Apex Court in the case of K. Sashidhar v. Indian Overseas Bank and Ors.: (2019) 12 SCC 150, Committee of Creditors of Essar Steel India Limited v. Satish Kumar Gupta and Ors.: (2020) 8 SCC 531 and Maharashtra Seamless Limited v. Padmanabhan Venkatesh and Ors. (2020) 11 SCC 467, the Bench observed that an Adjudicating Authority has a limited jurisdiction in the matter of approval of a resolution plan, which is provided by Sections 30(2) and 31 of the IBC.

The Apex Court in this regard made the following observation:

“78. To put in a nutshell, the Adjudicating Authority has limited jurisdiction in the matter of approval of a resolution plan, which is well defined and circumscribed by Sections 30(2) and 31 of the Code read with the parameters delineated by this Court in the decisions above referred. The jurisdiction of the Appellate Authority is also circumscribed by the limited grounds of appeal provided in Section 61 of the Code. In the adjudicatory process concerning a resolution plan under IBC, there is no scope for interference with the commercial aspects of the decision of the CoC; and there is no scope for substituting any commercial term of the resolution plan approved by the CoC. Within its limited jurisdiction, if the Adjudicating Authority or the Appellate Authority, as the case may be, would find any shortcoming in the resolution plan vis-à-vis the specified parameters, it would only send the resolution plan back to the Committee of Creditors, for re-submission after satisfying the parameters delineated by Code and exposited by this Court.”

Taking into consideration the arguments advanced by the Parties, the Supreme Court granted further 45 days for submission of the modified/fresh resolution plans by the resolution applicants, for their consideration by CoC. Furthermore, the Bench held that after receiving the resolution plans, the IRP shall take all steps in the prescribed manner and that his submission of report to the NCLT are accomplished in all respects within the extended period of 45 days. The Court noted that “The Adjudicating Authority shall take final decision in terms of Section 31 of the Code expeditiously upon submission of report by the IRP.”