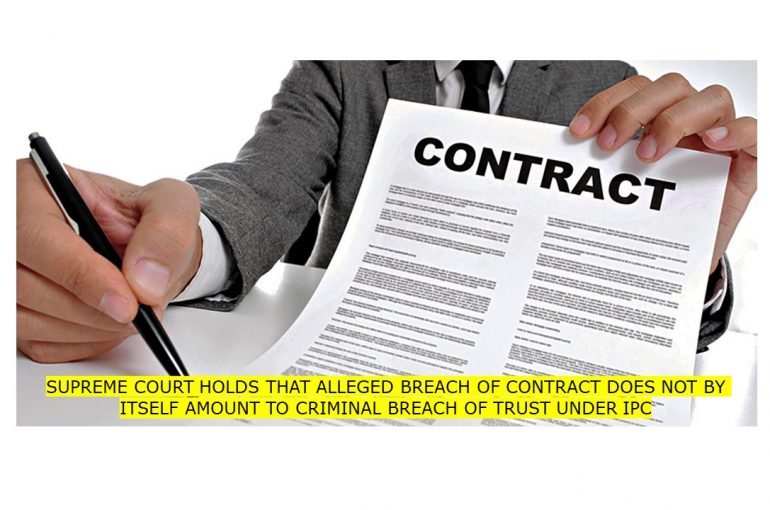 In a recent Criminal Appeal, a two Judge Bench of the Supreme Court comprising of Justice D.Y. Chandrachud and Justice A.S. Bopanna passed a Judgement dated 18.08.2022 in ‘M N G Bharateesh Reddy vs Ramesh Ranganathan, Criminal Appeal No 1273 of 2022’ and set aside the Judgement dated 12.07.2019 (Impugned Order) passed by the High Court of Karnataka and held that an alleged breach of the contractual terms does not ipso facto constitute the offence of the criminal breach of trust under the Indian Penal Code, 1860 (IPC).

On 10.10.2014, the Respondent No. 1 filed a Complaint under Sections 200 (Examination of complainant) of the Code of Criminal Procedure 1973, (CrPC), before the First Additional Civil Judge, Mysore and Judicial Magistrate First Class, Mysore (JMFC). In his Complaint, the Respondent No.1 alleged that the Appellant misused its authority and terminated his services with an oblique and ulterior motive of defaming him. The JMFC by an Order dated 03.03.2015 took cognizance under various provisions of the IPC. The Order of the JMFC was challenged before the Additional Sessions Judge, Mysore. The Additional Sessions Judge by an Order dated 16.12.2015 set aside the Order of the JMFC on the ground that the Complaint did not disclose the ingredients of the offences of defamation or cheating.

The Respondent No. 1 aggrieved by this Order dated 16.12.2015 of Additional Sessions Judge, filed an Appeal before the High Court of Karnataka. The Single Judge by an Order dated 12.07.2019 held that no case was made out against the Appellant under Sections 499 (Defamation) and 500 (Punishment for defamation) of the IPC. However, the High Court held that the material placed on record prima facie disclosed ingredients of offences under Sections 405 (Criminal breach of trust) and 420 (Cheating and dishonestly inducing delivery of property) of the IPC.

An Appeal was filed by the Appellant before the Supreme Court against the Order of the High Court dated 12.07.2019. The Apex Court considered Sections 415 and 420 of IPC and observed that, “The ingredients of the offence under Sections 415 emerge from a textual reading. Firstly, to constitute cheating, a person must deceive another. Secondly, by doing so the former must induce the person so deceived to (i) deliver any property to any person; or (ii) to consent that any person shall retain any property; or (iii) intentionally induce the person so deceived to do or omit to do anything which he would not do or omit if he were not so deceived and such an act or omission must cause or be likely to cause damage or harm to that person in body, mind, reputation or property. Sections 420 deals with cheating and dishonestly inducing delivery of property.”

The Supreme Court relied on the Judgement in the case of ‘Hridaya Ranjan Prasad Verma v. State of Bihar, (2000) 4 SCC 168’ a two-Judge Bench of where the Bench interpreted Sections 415 and 420 of IPC to hold that fraudulent or dishonest intention is a precondition to constitute the offence of cheating. The Apex Court held that, “The grievance of the Respondent No. 1 arises from the termination of his services at the Hospital. The allegations indicate that there was an improper billing in respect of the surgical services which were rendered by the complainant at the Hospital. At the most, the allegations allude to a breach of terms of the Consultancy Agreement by the Appellant, which is essentially in the nature of a civil dispute.”

Accordingly, the Apex Court held that the offence of cheating or criminal breach of trust was not made out against the Appellant-Hospital Management and thus, the Supreme Court set aside the Order dated 12.07.2019 passed by the High Court and restored the Order dated 16.12.2015 passed by the Additional Sessions Judge.