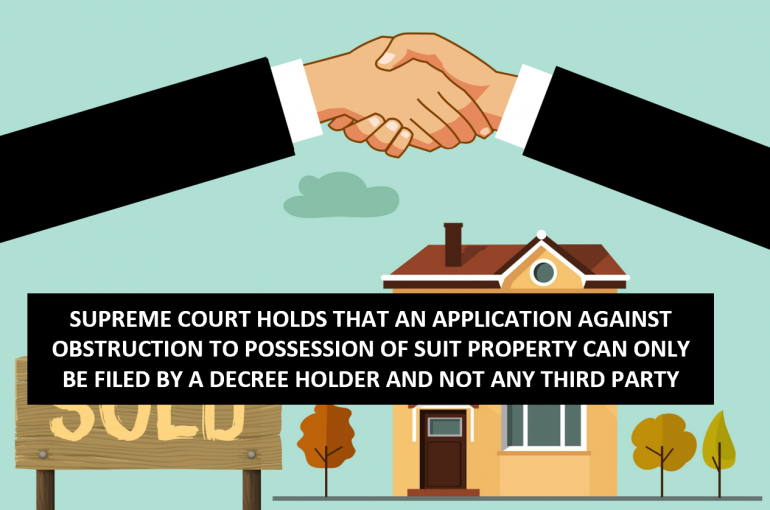 In a recent Civil Appeal, the Supreme Court with a Coram comprising of Justice Indira Banerjee and Justice J.K. Maheshwari in the matter of Sriram Housing Finance and Investment India Ltd. vs Omesh Mishra Memorial Charitable Trust, Civil Appeal No. 4649 of 2022 vide Order dated 06.07.2022 has upheld the Order dated 16.04.2014 (Impugned Order) passed by the Hon’ble High Court of Delhi in C.M (M) No. 493 of 2012 and held that the an application against obstruction or resistance caused to possession of suit property under Order XXI Rule 97 of the Code of Civil Procedure 1908 (CPC) (Resistance or obstruction to possession of immovable property) can only be filed by a decree holder or a bona fide purchaser and not any third party.

In the present case, one, Late Shri. N.D Sharma (Deceased) was the owner of Property Kothi No. 27, situated at Ishwar Nagar, New Delhi (Suit Property). The Suit Property was converted into Respondent Trust in the name of Deceased’s son i.e ‘Omesh Mishra Memorial Charitable Trust’ in 1992. In the year 1986, the Deceased lent a portion of Ground Floor of the Suit Property on lease to, one, Ms. Nisha Chauhan (Tenant) for a period of 2 years and at a monthly rental of Rs. 7000/-. Even after expiry of the term period of Lease, the Tenant refused to vacate the Suit Property.

Thereafter, the Deceased filed a Suit for Possession, Recovery of Arrears of Rent/ Mesne Profits etc in Civil Suit No. 181 of 1994. During the pendency of the Suit, the Deceased died on 27.05.1998. An Application under Order XXII Rule 3 CPC (Procedure in case of death of one of several plaintiffs or of sole plaintiff) was filed for substitution of his wife and daughters as Legal Heirs and the same was allowed by the Learned Trial Court. During the lifetime, the Deceased in his ‘Will’ bequeathed the Suit Property in the favour of Omesh Mishra Memorial Charitable Trust, the Respondent Trust. The Trial Court vide Order dated 30.11.2020 impleaded the Respondent Trust to become Co-Plaintiffs in Suit No. 181 of 1994 along with the Plaintiff’s Legal Heirs.

The Trial Court vide Order/Judgment dated 01.02.2003 decreed the Suit in favour of the Plaintiffs and the Trust for Possession, Mandatory Injunction and Mesne Profits in respect of Suit Property. The Tenant, vide Possession Letter dated 22.12.2003, handed over the possession of the Suit Property to the Plaintiffs. Thereafter, an Execution Petition No. 13/2004 was filed by the Decree Holders seeking enforcement of Judgment and Decree dated 01.02.2003 against the Tenant. Thereafter it came in the knowledge of Respondent Trust that, one, Mr. Yogesh Mishra (2nd son of the Deceased) had transferred the Suit Property to one, Sriram Housing Finance and Investment India Ltd., the Appellant Company. The Appellant Company acting as an agent of Mr. Yogesh Mishra took possession of the Suit Property directly from the Judgment Debtor on 22.12.2003.

Subsequently the Appellant Company filed an Application under Order XXI Rule 58 CPC (Adjudication of claims to, or objections to attachment of, property) and prayed for dismissal of Execution Petition No. 13/2004 on the ground that they became absolute owners of the Suit Property vide Registered Sale Deed dated 12.04.2004. The Execution Court vide Order dated 27.11.2004 dismissed the Application filed by the Appellant Company on the ground that the Respondent Trust was impleaded as the Co-Plaintiff in Suit No. 181 of 1994 based on the Deceased’s ‘Will’ which was never disputed by the Legal Heirs of the Deceased including Mr. Yogesh Mishra who sold the Suit Property to the Appellant Company.

Dissatisfied by the High Court Order dated 27.11.2008, the Appellant Company filed a Special Leave Petition (C) No. 31457 of 2008 before the Hon’ble Supreme Court, but the same was also dismissed.

Following which, the Appellant Company filed a separate Suit No. CS (OS) No. 434 of 2009 before the High Court for Declaration of Title and Permanent Injunction against the Respondent Trust. The said Suit was ‘dismissed as withdrawn’ vide Order dated 22.12.2010.

Being dissatisfied, the Appellant Company filed its objection under Order XXI Rule 97 to 101 CPC in the aforesaid Execution Petition No. 13/2004 filed by the Decree Holders/Trust. The Respondent Trust filed its objections and challenged the maintainability of the aforesaid Application filed by the Appellant Company. The Executing Court vide Order dated 13.01.2012, directed the Parties to lead their evidences.

Being aggrieved, the Appellant Company preferred the present Appeal before the Apex Court. The Supreme Court after hearing the contentions of the respective Parties, observed that under Order XXI Rule 97 CPC (Resistance or obstruction to possession of immovable property), it is only the Decree Holder who is entitled to make an application in case where he is offered resistance or obstruction by ‘any person’. In the present case, as admitted by the Appellant Company itself, it is a bona-fide purchaser of the Suit Property and not the ‘Decree Holder’. Therefore, it is obvious that Appellant Company cannot take shelter of Order XXI Rule 97 CPC as stated above to raise objections against execution of Decree passed in favour of Respondent Trust.