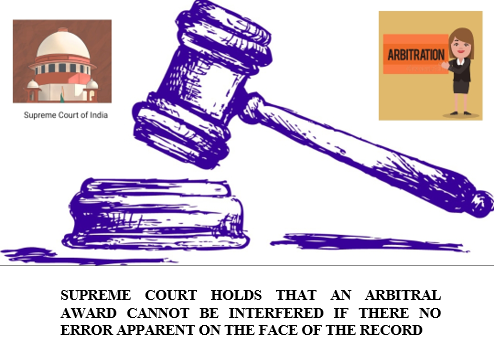 The 3-Judges Bench of the Hon’ble #SupremeCourt of India in the case of NTPC Ltd vs M/s Deconar Services Pvt. Ltd. (CA No. 6484 of 2014), vide its Judgment dated 04.03.2021 reiterated and held that there has to be an #error apparent on the face of the record for the Court to interfere with an #arbitralaward and findings thereon.

In this case, NTPC Ltd (“Appellant”) had issued two tenders for the construction of certain quarters i.e., government residential accommodation. M/s Deconar Services Pvt. Ltd (“Respondent”) participated and got both of the tenders for the construction of quarters. The Respondent offered 16% rebate on the prices for completing the first project, in the event it was awarded both the contracts. As a result, the Appellant awarded both the projects to the Respondent vide Two Letters dated 29.06.1988, respectively.

The dispute arose between the Parties regarding the final payment as there was some delay in the handing over of sites by the Appellant, which resulted in a delay in the completion of the construction of quarters in both projects. The Respondent sought arbitration under the dispute resolution clause with the Appellant, NTPC Ltd and an Arbitrator was appointed.

The learned Arbitrator, vide its Awards dated 07.07.2000, held that the intention of the Parties was to complete the construction of the quarters together, which would have enabled the Respondent to reduce its costs and optimize its charges, thereby allowing it to grant the 16% rebate to the Appellant. It was further held that the Respondent is entitled to a refund of the rebate given to the Appellant as it had delayed in handing over of the sites to the Respondent therefore breaching the condition for the grant of rebate.

Aggrieved by the same, the Appellant filed Civil Appeals before the Supreme Court against the Division Bench of the High Court Order dated 09.04.2010.

The major issue before the Supreme Court was whether the Arbitral Awards in question are assailable on any of the available grounds as mentioned in Section 34 of the Arbitration Act. The Supreme Court, vide its Judgment dated 04.03.2021 held and observed the following:

1) This Court has consistently held that the Court does not sit in an appeal over an award passed by an arbitrator. It relied on the case of Kwality Manufacturing Corporation v. Central Warehousing Corporation, (2009) 5 SCC 142 whereby it held that a court considering an Application under Section 30 or 33 of the Arbitration Act, does not sit in appeal over the findings and decision of the arbitrator.

2) It is a settled proposition that the Court would not interfere with the award where the arbitrator has taken a view, where a different view may also be possible on the same evidence.

3) The Appellant must show that the Award of the Arbitrator suffered from perversity or an error of law or that the Arbitrator has otherwise misconducted himself in order to succeed in their challenge against an Arbitral Awards. It is not a sufficient ground for the interference by the Court that there is another reasonable interpretation or possible view can be taken from the records.

4) The Court reiterated that matters relating to the construction of a contract lie within the province of the Arbitral Tribunal in this case. The view adopted by the Arbitrator is based on evidentiary material before him, which was relevant to the decision.

5) The Court further analyzed and observed that the construction was on the basis of the evidence on record and the submissions of the counsel before the Arbitrator. The Arbitrator has carefully delineated the period of delay attributable to the Appellant and has granted the claim of the Respondent only to that limited extent.

6) The Court also pointed out that whether an arbitrator can award a particular claim or not, will revolve on the interpretation of the contract in that case, the evidence placed before the arbitrator and other facts and circumstances of the case.

In view of the above, the Supreme Court finally held that that “the appellant has neither been able to point out any error apparent on the face of the record, nor otherwise made out a case for interference with the award by the Arbitrator.”