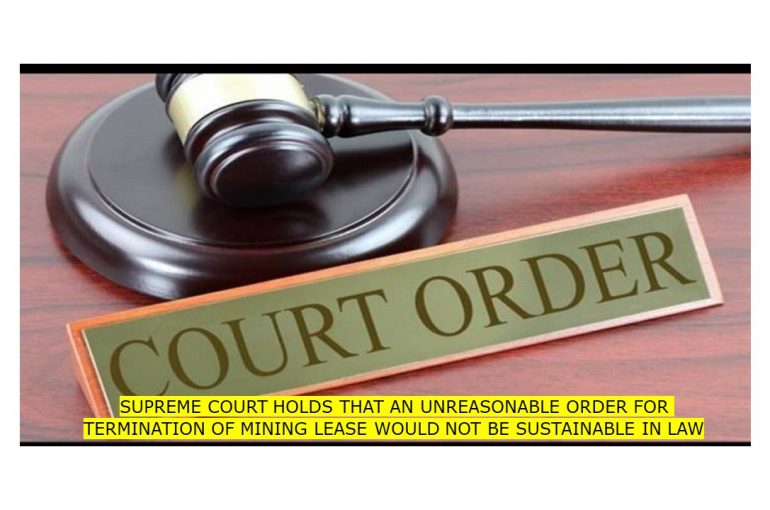 A Division-Bench of the Supreme Court, comprising of Justice L. Nageshwara Rao and Justice B.R. Gavai, while deciding the case of M/s Haryana Mining Company v. State of Haryana & ors., Civil Appeal No. 3795 of 2022, passed a Judgement dated 09.05.2022 and held that an unreasonable order for termination of mining lease passed by Director General, Mines and Geology would not be sustainable in law.

In this case, the Appellant- Haryana Mining Company, participated in an e-auction conducted by the State Government for grant of mining lease. The bid of the Appellant was accepted and a Letter of Intent dated 24.07.2015 was issued to the Appellant. Thereafter, a Lease Deed was executed between the Appellant and the State Government on 11.04.2016. The Appellant commenced mining operations on 15.06.2016, after the mining area was demarcated on 11.05.2016. Demarcation of the mining area was further conducted on 23.02.2017 and 21.08.2018. On 17.12.2018, another demarcation of the mining area was made. Thereafter, a Complaint was preferred by the Sarpanch of a Village Khudana by way of Resolution dated 08.01.2019, alleging illegal mining being carried out by the Appellant. On 04.02.2019, the District Mining Officer submitted a Letter to the Director, Mines and Geology, bringing to his notice the Complaint preferred by the Sarpanch of Village, alleging illegal mining by the Appellant beyond the leased area. An enquiry was conducted by the Additional Deputy Commissioner-cum-Nodal Officer. A Report (the “ADC Report”) was submitted on 25.02.2019 to Director General, Mines and Geology, in which illegal mining was found to have taken place. The mining operations of the Appellant were suspended by the Assistant Mining Engineer on 13.12.2019. By an Order dated 10.01.2020, the Director General, Mines and Geology, terminated the mining lease of the Appellant (Termination Order). Aggrieved by the said Order dated 10.01.2020, an Appeal was filed by the Appellant before the Appellate Authority, which dismissed the Appeal on 07.05.2021.

The Appellant challenged the Order of the Appellate Authority dated 07.05.2021 by filing a Writ Petition before the Punjab & Haryana High Court which was dismissed by Order dated 06.09.2021. Thereafter, an Appeal was preferred by the Appellant before the Supreme Court.

The Apex Court after considering the contentions of both the Parties and the relevant evidence on record, observed that Termination Order refers to a Demarcation Report of 17.12.2018 for the purpose of reaching the conclusion that the Appellant had indulged in illegal mining. However, a perusal of the said Demarcation Report showed that there was nothing mentioned therein about illegal mining carried out by the Appellant. The ADC Report, referred to in the Termination Order, concludes that it could not ascertain as to who was involved in the illegal mining. In the said Demarcation Report, it was categorically stated that “no fresh mining was found beyond the pillar”. This was also recorded in the Termination Order. There was no other reference to either a demarcation report or any other enquiry report of any officer from the Department of Mines and Geology or the Department of Forest, that would indicate any illegal mining conducted by the Appellant beyond the leased area.

Thus, Supreme Court held that the Termination Order dated 10.01.2020, the Appellate Authority Order dated 07.05.2021 and the High Court Order dated 06.09.2021, were arbitrary and suffered from the vice of unreasonableness. There was no other material against the Appellant in support of the allegation that the Appellant was engaged in illegal mining in the area adjacent to the leased site. Hence, the Apex Court set aside the aforesaid Orders and thereby, allowed the Appeal.