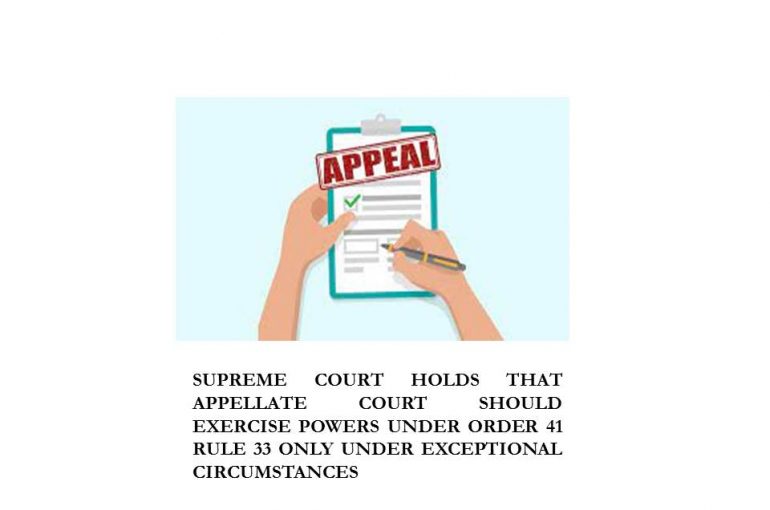 A Division Bench of the Hon’ble Supreme Court of India comprising of Justice K.M. Joseph and Justice Hrishikesh Roy passed a Judgment dated 07-04-2022 in the case of Eastern Coalfields Limited & Ors.v. Rabindra Kumar Bharti (Civil Appeal No.2794 Of 2022 (Arising out of SLP (C) No.12061/2021) and held that that although Order 41 Rule 33 of Code of Civil Procedure, 1908 (CPC) grants extraordinary power to the Appellate Courts, the same has to be exercised only in exceptional cases.

In the present case, one Rabindra Kumar Bharti (Respondent) was employed as a clerk with Eastern Coalfields Limited (Appellant). The Respondent was arrested by the Central Bureau of Investigation (CBI) on 31-08-2015. A case was lodged against the Respondent under Section 7 (12) & (13), sub-section 2 read with Section 13(i)(d) of the Prevention of Corruption Act, 1988 (Act) for demanding bribe. An Order of suspension was also passed by the Appellants against the Respondent on 03-08-2015, which was later on revoked on 15-09-2015. The Respondent was served a Notice of Departmental enquiry by the Appellants on 20-03-2017.

In view of this, the Respondent preferred a Writ Petition before the High Court of Calcutta (High Court). Vide Order dated 29-06-2017, the Court ordered that the departmental enquiry shall continue against the Respondent but restrained them from passing any final order without the leave of the Court. Accordingly, the departmental proceedings continued in which the Respondent participated. At the end of the enquiry, the Appellant filed an Application seeking leave to pass the final orders. Thus, the learned Single Judge of the High Court passed a Judgment dated 10-02-2021, permitting the disciplinary proceedings to attain finality at the hands of the disciplinary Authority resulting in the Authority passing an Order of terminating the services of the Respondent. This Order was assailed by the Respondent before the Division Bench of High Court. Meanwhile, the Respondent’s services were terminated vide an Order dated 02-03-2021.

The Division Bench vide Order dated 04-03-2021 held that “the final order of dismissal of the respondent be stayed till the disposal of the criminal case.” It was further ordered that the Order of the dismissal against the Respondent will become operative on the criminal proceeding culminating in an Order of conviction. The Division Bench was exercising power of the Court of Appeal provided in Order 41 Rule 33 of the CPC.

For easy reference, Order 41 Rule 33 of CPC is reproduced below:

The Appellate Court shall have power to pass any decree and make any order which ought to have been passed or made and to pass or make such further or other decree or order as the case may require, and this power may be exercised by the Court notwithstanding that the appeal is as to part only of the decree and may be exercised in favour of all or any of the respondents or parties, although such respondents or parties may not have filed any appeal or objection and may, where there have been decrees in cross-suits or where two or more decrees are passed in one suit, be exercised in respect of all or any of the decrees, although an appeal may not have been filed against such decrees:

Provided that the Appellate Court shall not make any order under section 35A, in pursuance of any objection on which the Court from whose decree the appeal is preferred has omitted or refused to make such order.

Aggrieved, the Appellants approached the Hon’ble Supreme Court of India by way of Special Leave Petition contending that High Court has erred in not noticing that principally it is not desirable to delay the departmental proceeding on account of pendency of a criminal case.

After perusing the facts and circumstances of the case and the arguments advanced by the Parties to the dispute, the Apex Court observed that although Order 41 Rule 33 of CPC grants extraordinary power to the Appellate Courts, the same has to be exercised only in exceptional cases.

“It is undoubtedly true that this Court has taken the view that when the charges are identical and gives rise to complicated issues of the fact and law and evidence is the same, it may not be appropriate to proceed simultaneously in disciplinary proceedings, along with the criminal case. The rationale behind the principle largely is that the employee who is facing the disciplinary proceeding would necessarily have to take a stand. This in turn would amount to revealing his defense and therefore prejudice the employee in the criminal proceedings. No doubt, this Court has laid down that it is not an absolute embargo and the principle is one to be applied based on the facts of each case.”

The Bench disapproved the approach taken by the High Court and held as follows:

“Order 41 Rule 33 no doubt clothes the appellate court with an extra ordinary power, which however is a rare jurisdiction. It is to reach justice in the special facts of a case. It is not an ordinary rule to be applied across the board in all the appeals. In fact, the principle is interalia no doubt that even if there is no appeal by any of the parties in the proceedings, an order can be passed in his favour in the appeal carried by the other side. Any order which ought to have been passed can be passed. In this case, there is no order against the appellant(s) by the learned Single Judge. The order of dismissal was not specifically the subject matter of challenge as noticed. We do not think in the facts of this case, that it is a fit case where the High Court could have supported the directions with reference to Order 41 Rule 33.”

Thus, the Apex Court set aside the Impugned Judgment dated 04-03-2021 passed by the High Court and allowed the Appeal. It further held that the Respondent has all the rights to challenge the disciplinary proceeding in any competent forum.