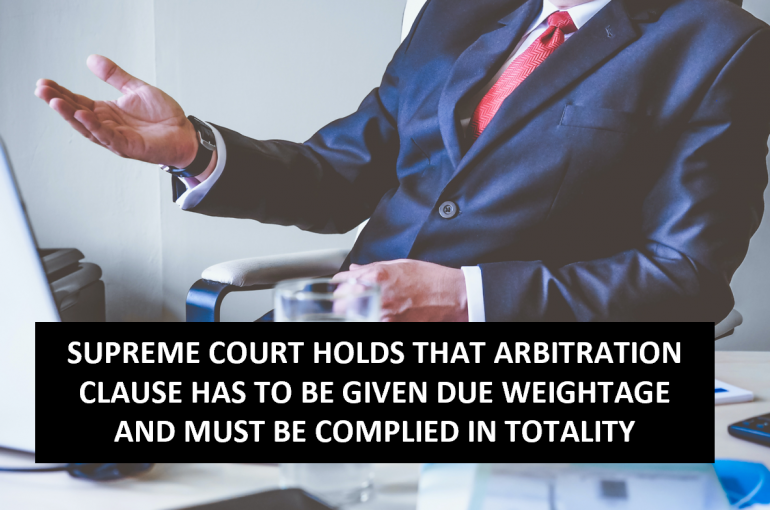 A two Judge Bench of the Hon’ble Supreme Court of India comprising of Justice Surya Kant and Justice Abhay S. Oka passed a Judgment dated 07.09.2022 in the case of Babanrao Rajaram Pund v. M/s. Samarth Builders & Developers & Anr. [Arising out Of Special Leave Petition (Civil) No.15989 of 2021] and held that an intention of the Parties that flows from the substance of the Agreement to resolve their dispute by arbitration has to be given due weightage and must be complied fully.

The Development Agreement stipulated that that Respondent No. 1 shall construct ‘Amay Apartments’ within a period of 15 months which was extendable, incumbent on payment of a penalty amount. The Respondent No. 1 agreed to hand over the constructed area to the extent of 45% to the Appellant on or before the completion of the period of 15 months and to retain the remaining 55% of the developed portion.

The Parties also entered into a Deed of Declaration under Section 2 of the Maharashtra Apartment Ownership Act, 1970 that was registered on 20.10.2015 for the purposes of retaining the facilities, amenities, common spaces, and to specify the portions of the developed property.

However, the Respondent No. 1 failed to complete the development works within the stipulated time of 15 months. Accordingly, the Appellant served a Legal Notice dated 11.07.2016 to the Respondents stating that he would like to terminate the Development Agreement and cancel the GPA as the said period of 15 months along with the extendable period of 3 months had already lapsed. Additionally, the Appellant also issued a publication in the newspaper dated 11.07.2016 and thereby informed the general public that the Development Agreement and the GPA have been terminated.

Also, Clause 18 of the Development Agreement contained an ‘Arbitration Clause’ which is reproduced below:

Clause 18: All the disputes or differences arising between the parties hereto as to the interpretation of this Agreement or any covenants or conditions thereof or as to the rights, duties, or liabilities of any part hereunder or as to any act, matter, or thing arising out of or relating to or under this Agreement (even though the Agreement may have been terminated), the same shall be referred to arbitration of a Sole Arbitrator mutually appointed, failing which, two Arbitrators, one to be appointed by each party to dispute or difference and these two Arbitrators will appoint a third Arbitrator and the Arbitration shall be governed by the Arbitration and Conciliation Act, 1996 or any re­-enactment thereof.

The Appellant sought an injunction under Section 9 of the Arbitration and Conciliation Act, 1996 (Act) (Interim measures, etc., by Court) in M.A..R.J.I No. 285 of 2016 and the District Court at Aurangabad vide Order dated 30.09.2016 restrained the Respondent No. 1 from selling any tenements on the developed property till further orders.

Thereafter, the Appellant invoked Clause 18 (Arbitration Clause) of the Development Agreement on 07.11.2016 and issued a Notice to this effect to the Respondents regarding reference of the dispute to Mr. Shyam Rajale as the sole arbitrator. Though the Notice was duly served on the Respondents, there was no reply/response. Thus, the Appellant filed an Application under Section 11 of the Act (Appointment of arbitrators) before the High Court of Bombay (High Court).

The High Court vide Impugned Judgment dated 07.07.2021 acknowledged the existence of Clause 18 in the Development Agreement that provided for the reference of the disputes to arbitration, however, it also accepted the submissions made by the Respondents that Clause 18 lacked certain essential ingredients of a valid arbitration agreement, as it nowhere states that the decision of the arbitrator shall be final and binding on the Parties to the dispute. Consequently, the High Court dismissed the Application filed by the Appellant on the ground that it was not maintainable.

Aggrieved by the Impugned Judgment dated 07.07.2021, the Appellant approached the Hon’ble Supreme Court. Notice was served on the Respondents 20.10.2021 and was duly served but the Respondents did not enter appearance. Accordingly, the Apex Court proceeded to hear the matter ex parte on 22.08.2022.

The issue that arose before the Supreme Court was whether Clause 18 constitutes a valid arbitration clause for the purpose of invoking powers under Section 11 of the Act?

The Apex Court after perusing the facts and contentions of the Parties to the dispute, observed that section 7 of the Act does not stipulate any particular form for the arbitration clause.

Reliance was placed on the essential elements of an arbitration agreement which are as follows:

Referring to Clause 18, the Bench observed:

“Firstly, apart from the fact that Clause 18 of the Development Agreement uses the terms “Arbitration” and “Arbitrator(s)”, it has clearly enunciated the mandatory nature of reference to arbitration by using the term “shall be referred to arbitration of a Sole Arbitrator mutually appointed, failing which, two Arbitrators, one to be appointed by each party to dispute or difference”. Secondly, the method of appointing the third arbitrator has also been clearly mentioned wherein the two selected Arbitrators are to appoint a third arbitrator. Finally, even the governing law was chosen by the parties to be “the Arbitration and Conciliation Act, 1996 or any re­-enactment thereof.” These three recitals, strongly point towards an unambiguous intention of the parties at the time of formation of the contract to refer their dispute(s) to arbitration”

The Supreme Court thus found that the Clause 18 discloses the intention and obligation of the Parties to be bound by the decision of the Tribunal, even though the words “final and binding” are not expressly incorporated therein. While allowing the Appeal, it was observed that:

..It is thus imperative upon the courts to give greater emphasis to the substance of the clause, predicated upon the evident intent and objectives of the parties to choose a specific form of dispute resolution to manage conflicts between them. The intention of the parties that flows from the substance of the Agreement to resolve their dispute by arbitration are to be given due weightage. It is crystal clear to us that Clause 18, in this case, contemplates a binding reference to arbitration between the parties and it ought to have been given full effect by the High Court.”

The Supreme Court has time and again made it clear that the intention of the Parties in a commercial contract must be given weight. If parties agree to be bound by terms, they shall be bound by such terms so long as the same is not illegal. An arbitration clause must set out conditions when parties will be deemed to be in dispute. The clause must also clearly set out the intention of the parties to arbitrate. If these conditions are present, the word ‘final and binding’ though absent will not make the clause redundant.