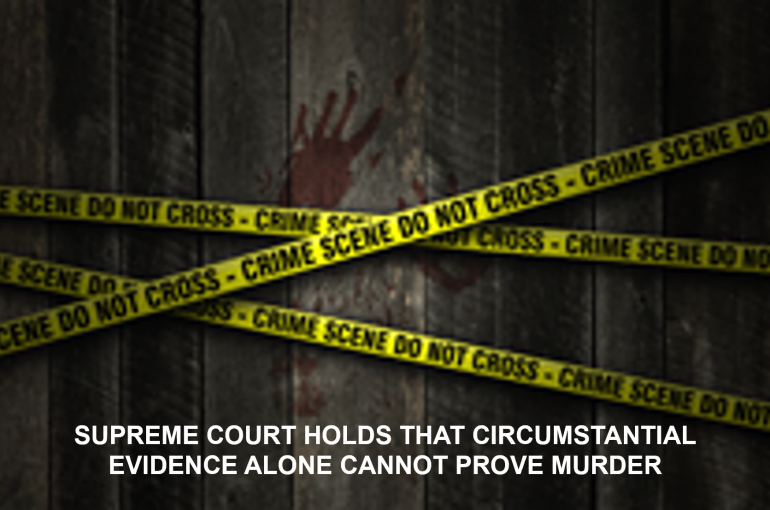 I. Brief facts of the case:

A) Incidents leading to the Complaint and Case

On 28.06.2009 at around 08:40 am, Rai Singh (PW-8), the Pradhan of a Village, where the Accused, Sh.Satye Singh resides, informed Virendra Raj (PW-11), the Naib Tehsildar through a phone call, that one lady had died due to burns. When PW-11, reached the spot i.e ‘Chhan’, after making an entry, he saw the dead body of Smt. Shashi Devi (hereby referred as ‘Deceased’) was lying in the room of ‘Chhan’ in the burnt condition. Thereafter, the father of the Deceased Sh. Sharad Singh, on receiving the phone call from Sh.Satye Singh (hereby referred to as ‘Accused’) reached the spot. Then the said Sharad Singh gave a written complaint to Naib Tehsildar against all the Accused- Satya Singh (Husband), Indra Devi (Mother-in-Law), and Sangeeta Devi (Sister-in-Law) of the Deceased, which was registered as Case Crime No. 16/2009 dated 28.06.2009 at Revenue Police Station (Complaint). After initialising the proceedings, the body of the Deceased was sealed and taken to Baushari Hospital for post-mortem. Thereafter, the Naib Tehsildar drew a Panchnama and arrested the Accused-Satye Singh. He also recorded the statement of other witnesses. Later, the further investigation was handed over to another Naib Tehsildar, Gunanad Bahuguna (PW-10). The said Investigation Officer (hereby referred as ‘I.O’), after completing the investigation filed the Charge-Sheet against the Accused namely- Satye Singh and Indra Devi for offences under Section 302 of the Indian Penal Code (“IPC”) (Punishment for Murder) and 201 IPC (Causing disappearance of evidence of offence, or giving false information to screen offender), and but the Accused Sangeeta Devi was absconding.

B) Trial before the Trial Court

The case was committed to the Sessions Court, where the Accused- Satye Singh was put to trial and the Accused- Satye Singh pleaded not guilty to the charges against him under Section 302 and 201 of IPC. That the Accused No.1 (Satye Singh) while recording his statement before Trial Court stated that there was no custom of dowry in their society and that he did not know how the Deceased died. He further stated that he along with other people of the Village kept on searching for the Deceased the whole night but she was not found. He also stated that the Deceased had possibly committed suicide. The Accused No.2 (Indra Devi) stated that since she was the mother of Accused No.1, she was falsely implicated. However, on appreciation of the evidence including the statements of 11 Witnesses and the documentary evidence, the Trial Court convicted both the Accused, vide Order dated 11.10.2010.

C) Appeal before the High Court

The Accused approached the High Court by filing an Appeal against the Order of the Trial Court. The High Court considered all the facts and evidence and came to the conclusion of upholding the Order dated 11.10.2010 passed by the learned Trial Court, vide Judgment dated 29-08-2013 (Impugned Judgment).

D) Appeal before the Supreme Court

The Accused were aggrieved and dissatisfied by the Impugned Judgment of the High Court and thus, filed an Appeal before the Supreme Court.

II. Issues before the Supreme Court

a) Whether the High Court has erred in its Judgment by holding the Accused guilty of the offence under Sections 302 and 210 of IPC?

b) Whether the Sessions Court has rightly convicted the Accused for offence under Sections 302 and 210 IPC?

III. Arguments before the Supreme Court

A) Contentions of the Counsel for Accused

That the Trial Court and the High Court had committed an error in convicting the Appellants as there was no evidence to prove the charges levied. That both the Accused were arrested and convicted merely on the ground of suspicion and based on circumstantial evidence as there was no eye witness to the alleged incident.

B) Contentions of the Counsel for the Respondent

(iii) Abdomen was burst and intestine was protruding out, 10CM x 4CM

(iv) Entire body had blackened, charred, peeling, scaring like parchment and the muscles were visible. Hairs of the head had burnt.

IV. Judgment of The Supreme Court

The Apex Court examined various facets of the case and noted:

3) The Supreme Court observed that though the circumstances and evidence on record, states that the Deceased was harassed by the Accused but there no charges made under Section 498A IPC against the Accused. It is further stated that the evidence on record shows that, the Deceased left the house the previous evening of the incident and was not found the whole night. Nonetheless such circumstances itself could not be said to be sufficient proof to come to a conclusion that the Accused murdered and burnt the Deceased.

4) Further, the Apex Court referred to its Judgment in Sharad Birdhichand vs. State of Maharashtra, 1984 (4) SCC 116 and observed as follows:

(1) the circumstances from which the conclusion of guilt is to be drawn should be fully established.

(2) the facts so established should be consistent only with the hypothesis of the guilt of the accused, that is to say, they should not be explainable on any other hypothesis except that the accused is guilty,

(3) the circumstances should be of a conclusive nature and tendency,

(4) They should exclude every possible hypothesis except the one to be proved, and

(5) There must be a chain of evidence so complete as not to leave any reasonable ground for the conclusion consistent with the innocence of the accused and must show that in all human probability the act must have been done by the accused.”

Based on the aforesaid observations, the Supreme Court in this case observed that the Prosecution had miserably failed to prove the entire chain of circumstances which would conclude that the alleged act was committed by the Accused himself. Thus, the Apex Court set aside the Impugned Judgment and thereby, acquitted the Accused from the charges levelled against them.