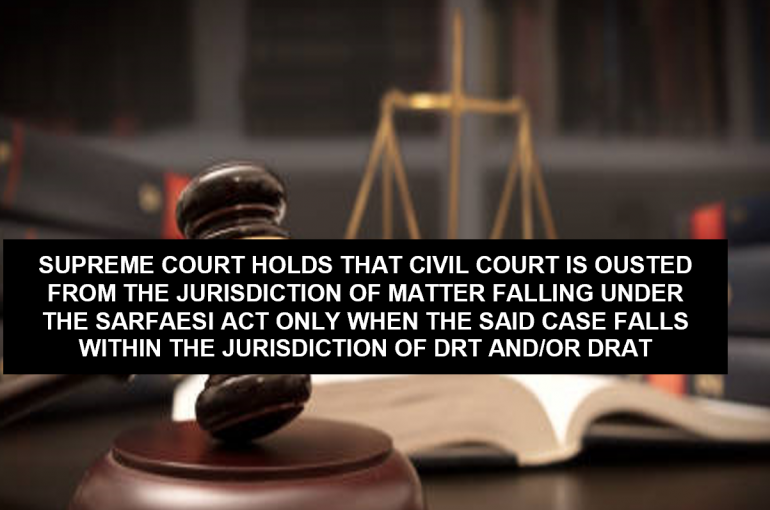 Recently, a two Judge Bench of the Supreme Court comprising of Justice M. R. SHAH and Justice KRISHNA MURARI passed a Judgment dated 17.11.2022 in MRS. LEELAMMA MATHEW V. M/S INDIAN OVERSEAS BANK & ORS. in CIVIL APPEAL NO. 7128 OF 2022, and held that Section 34 of the SARFAESI Act shall be applicable only in a case where the Debt Recovery Tribunal and/or Appellate Tribunal is empowered to decide the matter under the SARFAESI Act which states that a civil court shall not have jurisdiction to entertain any matter that falls within the Debts Recovery Tribunal or the Appellate Tribunal. However, in the facts of the present case the Supreme Court held that the civil court had the jurisdiction to decide the matter as the relief sought was for compensation and damages for a shortfall in the property sold to the Petitioner.

The Defendant ­ Bank secured the property in Survey No.48/1 in Tirur Taluk, Tanur Village in exercise of powers under the provisions of the Securitization and Reconstruction of Financial Assets and Enforcement of Security Interest Act 2002 (hereinafter referred to as ‘SARFAESI Act’). A notice for auction was issued regarding the secured asset admeasuring 54 cents and the Appellant–Plaintiff after inspection of the property submitted the quotation for sale of 54 cents of land and offered Rs.32,05,000/-.  In the quotation, the original Plaintiff specifically stated that the offer of Rs.32,05,000/­ is subject to the condition that absolute ownership and vacant possession of full extent of property without encumbrances is handed over. However, by communication dated 05.03.2007, the Bank replied, as in the invitation to the public for tenders, that the property would be sold in “as is where is” and “as is what is” condition, The original Plaintiff may confirm that he is ready and willing to offer the bid and take the property in the present condition. The   original Plaintiff reiterated that she is ready to purchase the property only if, absolute ownership, vacant possession and full enjoyment of 54 cents of land, free from all encumbrances is given, otherwise, she is not ready to purchase the property, if the Bank is not able to assign absolute ownership, vacant possession and full enjoyment of the property admeasuring 54 cents.

Thereafter, the Plaintiff filed a suit contending that she paid a total sale consideration for 54 cents of the land and even the sale certificate and the sale deed was executed for 54 cents, yet the Plaintiff has been handed over the possession of only 39.60 cents of the land. Therefore, the Plaintiff instituted a suit for recovery of damages/compensation with respect to 14.40 cents. The Trial Court decreed the suit and directed the Defendant –   Bank to pay to the Plaintiff a sum of Rs.58,10,000/­ with future interest @ 12% p.a. from the date of suit till realization.

Whether the jurisdiction under section 34 of the SARFAESI Act is applicable only in a case where the D.R.T. and/or D.R.A.T. is empowered to decide the matter?

Disagreeing with the finding that the suit was barred in view of Section 34, the Bench observed that:

“At the outset it is required to be noted that the suit was for damages/compensation, with respect to the balance land, which could not have been decided by the DRT or Appellate Tribunal, Section 34 of the SARFAESI Act shall be applicable only in a case where the Debt Recovery Tribunal and/or Appellate Tribunal is empowered to decide the matter under the SARFAESI Act. The Plaintiff was not challenging the sale/sale certificate. The Plaintiff claimed the damages/compensation with respect to the less area. Therefore, the High Court has seriously erred in holding that the suit was barred by Section 34 of the SARFAESI Act.”

The Bench further observed that:

“Rule 8 of the 2002 Rules cast a duty on the authorized officer to take all precautions before putting the secured asset to sell.  As per sub­rule 5 of Rule 8 before effecting sale of the immovable property (secured assets), the authorized officer shall obtain valuation of the property from an approved valuer and in consultation with the secured creditor and fix the reserve price of the property and may sell the whole or any part of such immovable secured asset. Therefore, when the reserve price was fixed, the same was for 54 cents. Therefore, it can be presumed that the Bank was aware that the actual area of the secured asset is less than 54 cents.  As per Section 54 of the Transfer of Property Act the seller was bound to disclose any buyer any material defect in the property of which the buyer is not aware and which the buyer could not ordinarily discover.”

Thus, based on the aforesaid observations, the Apex Court held that that it was not open for the Bank to contend that the Bank had handed over the possession of 34.60 cents on “as is where is” and “as is what is” condition and therefore, the sale consideration recovered from the buyer will have to be for 54 cents. The Supreme court did not accept this line of reasoning and allowed the Appeal and set aside the Judgment of the Kerala High Court.

Generally, under a specialized legislation the jurisdiction of the civil court is ousted. This is in order to enable the court specified under that legislation to expeditiously dispose off the matter and many a times in a summary manner. Hence, the higher courts have always upheld the boundaries laid down by such legislations. However, if the subject matter does not fall squarely within the jurisdiction of that legislation, a litigant can approach the civil court. In this particular case, the litigant’s relief was for damages and compensation for a shortfall in the area of the property that was given to her by the bank. Hence, such a general matter would not fall within the jurisdiction of Debts Recovery Tribunal or the Appellate Tribunal but would be the subject matter that can only be decided by a civil court, Hence the Apex Court decided the matter accordingly.