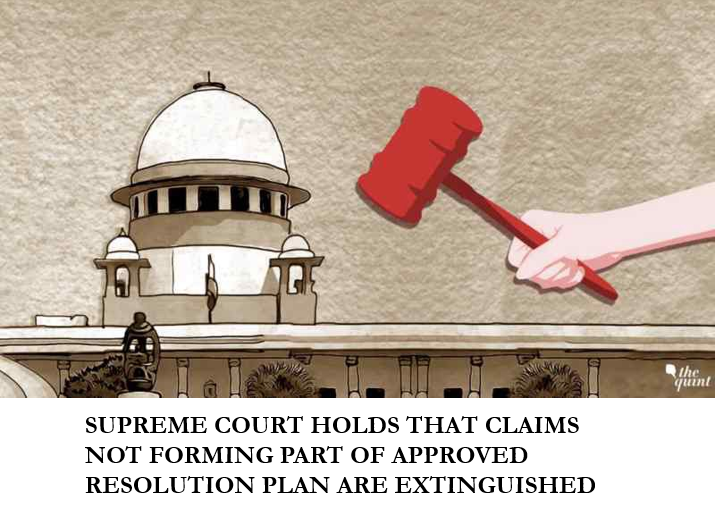 Recently, the Hon’ble #SupremeCourt of India in the case of <strong><em>Ghanshyam Mishra and Sons Pvt. Ltd. v. Edelweiss Asset Reconstruction Company Limited,</em></strong> <strong>(Civil Appeal No.8129/2019),</strong> vide its Judgment dated 13.04.2021 held that any #creditor including Central/State #Government or any local authority is bound by #ResolutionPlan as approved by Adjudicating Authority under Section 31(1) of the Insolvency and Bankruptcy Code, 2016 (“#<strong>IBC, 2016</strong>”).

In this case, the State Bank of India (“<strong>Financial Creditor</strong>”) filed an application under Section 7 of IBC, 2016 before the National Company Law Tribunal, Kolkata Bench, Kolkata (“<strong>NCLT</strong>”) against the Orissa Manganese &amp; Minerals Limited (“<strong>Corporate Debtor</strong>”), which is a company, engaged in the business of mining iron ore, graphite, manganese ore and agglomerating iron fines into pellets through its facilities in Orissa and Jharkhand.

On the other hand, EARC challenged the approval of the Resolution Plan submitted by GMSPL, vide Company Application (IB) No. 398/KB/2018. It was contended, that RP violated Regulations 13 and 14 of the Insolvency and Bankruptcy Board of India (Insolvency Resolution Process for Corporate Persons) Regulations, 2016 (the “<strong>Regulations</strong>”) in not admitting other claims. It further contended that the GMSPL Resolution Plan does not include the dues of all the Creditors.

However, NCLT approved the Resolution Plan of GMSPL and rejected all other applications filed by the EARC, vide its Order dated 22.06.2018. As a result, EARC filed the Company Appeal before the National Company Law Appellate Tribunal, New Delhi (“<strong>NCLAT</strong>”) against the rejection of its claims. The NCLAT, vide its Order dated 23.04.2019 held that the Resolution Plan of GMSPL is better than the other Applicants. However, NCLAT observed that that the claims of the parties, which are not included in the Resolution Plan could be agitated by them before other forums.

<strong>3)</strong> It further observed that once a resolution plan is duly approved by the NCLT under Section 31(1) of the IBC, the claims as provided in the resolution plan shall stand frozen and will be binding on the Corporate Debtor and its employees, members, creditors, including the Central Government, any State Government or any local authority, guarantors and other stakeholders.

<strong>4)</strong> Further, on the date of approval of resolution plan by the Adjudicating Authority, all such claims, which are not a part of resolution plan, shall stand extinguished and no person will be entitled to initiate or continue any proceedings in respect to a claim, which is not part of the resolution plan.

<strong>5)</strong> The legislative intent behind the same is to freeze all the claims so that the Resolution Applicant starts on a clean slate and is not flung with any surprise claims.

<strong>6)</strong> Consequently all the dues including the statutory dues owed to the Central Government, any State Government or any local authority, if not part of the resolution plan, shall stand extinguished and proceedings in respect of such dues for the period prior to the date on which the Adjudicating Authority grants its approval under Section 31 cannot be continued.

Therefore the Supreme Court held that the observation made by the NCLAT that EARC is entitled to take recourse to such remedies as are available to it in law, is not permissible in law. Thus, all claims which are not part of a Resolution Plan are extinguished and no person will be entitled to initiate any proceedings in respect to a claim, which is not part of the approved Resolution Plan.