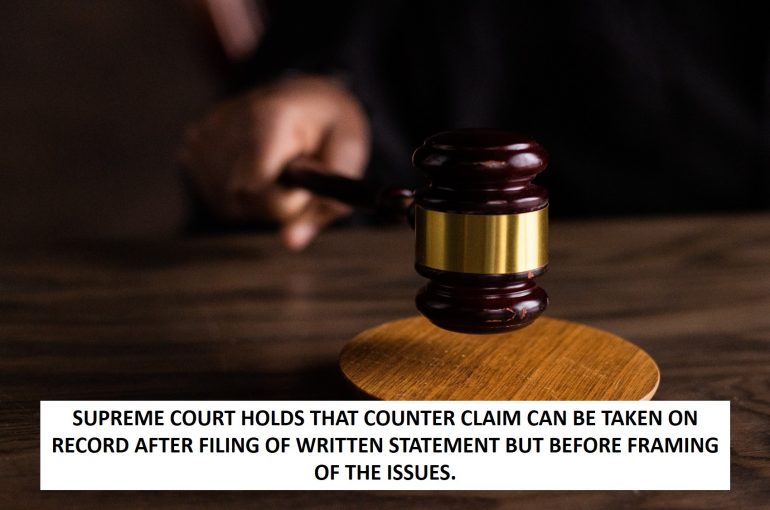 Recently, a two Judge Bench of the Supreme Court comprising of Justice Dinesh Maheshwari and Justice Aniruddha Bose passed a Judgment dated 12.10.2022 in MAHESH GOVINDJI TRIVEDI       v. BAKUL MAGANLAL VYAS & ORS in CIVIL APPEAL NO. 7203 OF 2022, and observed that there is no bar in taking on record a Counter Claim that was filed 13 years after the Written Statement was filed by Appellant-Defendant.

This case is related to the Property situated at Vile Parley, Mumbai, for which the Respondents-Plaintiffs have filed the Suit no. 1821 of 2004 on 10.06.2004, seeking specific performance of an Agreement for transfer dated 28.05.2001 which have been executed by its Owner, Ramalaxmi Ravishankar Trivedi (Deceased). The Appellant filed his written statement in the Suit on 16.11.2005. It was the Appellant’s case that he had acquired all the rights in the Suit Property by settlement with other legal heirs of the deceased Owner on 05.04.2017. Later on, the Appellant-Defendant filed his Counter Claim in this Suit in the Bombay High Court.

When the Suit was taken up for framing of issue the learned Single Judge of the High Court dealing with the Suit took objection against such filing of Counter-Claim much after the defendant had filed his written statement and without taking leave of the Court, particularly with reference to Rule 95 of the Bombay High Court (Original Side) Rules. The learned Single Judge vide Order dated 05.12.2018, held that the Counter-Claim be de-registered.

The Appellant challenged the said aforementioned Order before the Division Bench of the High Court, which granted permission to the Appellant to file the Counter claim within 2 weeks, vide Order dated 29.03.2019, while leaving it open for the Single Judge to decide the same on its own merits. In view of the same, the Appellant filed notice of motion seeking leave to file the counter claim claiming possession of the Suit Property. While considering this notice of motion, the learned Single Judge granted leave to file the Counter-Claim to avoid multiplicity of proceedings. Therefore, vide Order dated 02.05.2019, the learned single judge made the notice of motion absolute.

On 28.06.2019, the Respondents-Plaintiffs sought extension of time for filing written statement to the Counter-Claim, which was granted and the matter was adjourned to 11.07.2019. Then, on 09.07.2019, the written statement to the Counter-Claim was filed by the Respondents. However, the Appellant-Defendant filed Notice of Motion No. 2601 of 2019 on 18.09.2019, seeking leave to transfer right, title and interest in the Suit Property to third parties, but was dismissed vide Order dated 21.01.2020. In the meantime, the Appellant filed appeal before the Division Bench of Bombay High Court against the aforesaid Order dated 21.01.2020, but was dismissed vide Order dated 20.01.2021. Being aggrieved, the Appellant approached the Supreme Court by filing a SLP (C) No. 1786 of 2021 which was dismissed on 26.02.2021.

Meanwhile, the Division Bench of the High Court in Suit no. 1821 of 2004 vide Order dated 30.11.2021 observed that Appellant-Defendant was not given adequate opportunity of contesting the notice of motion for taking the Counter-Claim on record.

Whether the Division Bench of the High Court was justified in interfering with the Order passed by the Single Judge for taking the Counter-Claim.

Aggrieved by the aforementioned Order dated 30.11.2021 of the Division Bench of High Court, the Appellant moved the Apex court under Article 136 of the Constitution of India (Special Leaved to Appeal by the Supreme Court).

Thus, based on the aforesaid observations, the Apex Court allowed the Appeal and restored the Single Bench Order taking on record the Counter Claim, as until then the issues had not been framed in the Suit. The Impugned Order dated 30.11.2021 as passed by the Division Bench of the High Court was set aside; and Order dated 02.05.2019 as passed by the learned Single Judge was restored.