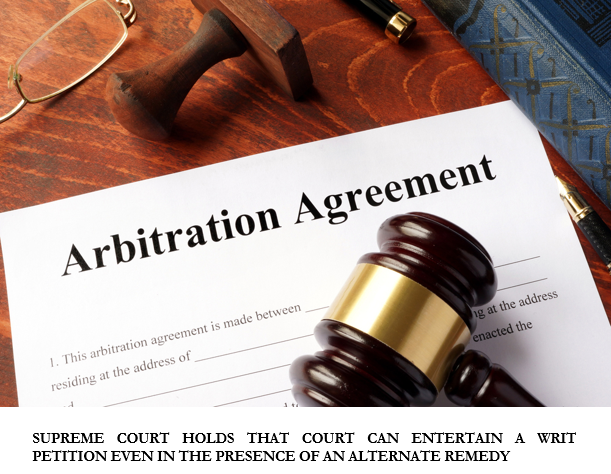 The Two Judge Bench of the Hon’ble #SupremeCourt of India comprising of Justices Uday Umesh Lalit and Indira Banerjee passed a #Judgment dated 12-05-2021 in the case of Uttar Pradesh Power Transmission Corporation Ltd. And Anr. v. CG Power and Industrial Solutions Limited And Anr. {Special Leave Petition (C) NO. 8630 OF 2021} and held that presence of an #arbitrationclause does not debar the court from entertaining a #writpetition in #contractual matters.

In the present case, CG Power and Industrial Solutions Limited (Respondent No. 1) entered into a Framework Agreement (Agreement) with UPPTCL (Appellant) for construction of 765/400 KV Substations, at Unnao, Uttar Pradesh. By Letter dated 05-03-2010, the Superintending Engineer, UPPTCL, Unnao placed an order with the Respondent No.1 for construction of 765/400 kV Substation at Unnao on single source responsibility turn-key basis. As per the said Agreement, the work was split, and covered by four separate contracts.

This direction was issued as in the Audit Report, the Accountant General pointed out that there was a lapse on part of the Appellant to deduct Labour Cess from the bills of the contractor, i.e. Respondent No. 1 in respect of the first contract (First Contract).

Subsequently, a Writ Petition was filed by the Respondent No. 1 before the Allahabad High Court (High Court) challenging the aforesaid directions for payment of Labour Cess issued by Executive Engineer, Unnao of the Appellant Company in this regard. The High Court allowed the same.

Aggrieved, the Appellant filed an Appeal in the Hon’ble Supreme Court of India. The Apex Court observed that although the First Contract contained an Arbitration Clause, but the Appellant had not raised any objection to the filing of Writ Petition by the Respondent in the High Court.

Furthermore, the Bench observed that

“67. It is well settled that availability of an alternative remedy does not prohibit the High Court from entertaining a writ petition in an appropriate case. The High Court may entertain a writ petition, notwithstanding the availability of an alternative remedy, particularly (1) where the writ petition seeks enforcement of a fundamental right; (ii) where there is failure of principles of natural justice or (iii) where the impugned orders or proceedings are wholly without jurisdiction or (iv) the vires of an Act is under challenge.”

The Bench observed that relief under Article 226 of the Constitution of India may be granted in a case arising out of a contract.

The Court said “however, the writ jurisdiction under Article 226, being discretionary, the High Courts usually refrain from entertaining a writ petition which involves adjudication of disputed questions of fact which may require analysis of evidence of witnesses. Monetary relief can also be granted in a writ petition.”

While dismissing the Appeal in this case, the Supreme Court concluded that the Appellant had no power or authority to realize Labour Cess under the Cess Act in respect of the First Contract by withholding dues in respect of other contracts.