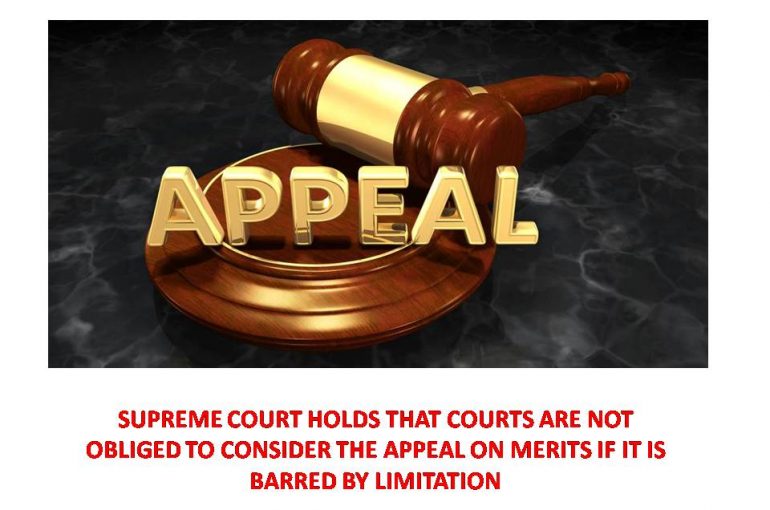 SUPREME COURT HOLDS THAT COURTS ARE NOT OBLIGED TO CONSIDER THE APPEAL ON MERITS, IF IT IS BARRED BY LIMITATION

In a recent Special Leave Petition (Civil), a two Judge Bench of the Supreme Court comprising of Justice Indira Banerjee and Justice A.S. Bopanna passed an Order and Judgement dated 04.04.2022 in ‘State of Uttar Pradesh & Ors vs.  M/S Satish Chand Shivhare And Brothers ’ (SLP (Civil) No. 5301 of 2022) and  upheld the Order dated 27.01.2021 passed by the High Court of Judicature at Allahabad (Impugned Order) and held that Courts are not obliged to consider merits of an appeal which is barred by limitation and no plausible cause for delay is shown.

In the present case, the State of Uttar Pradesh, the Appellant- original Plaintiff invited tenders for construction of Gymnastic Hall in Agra, pursuant to which M/S Satish Chand Shivhare And Brothers, the Respondent submitted its offer and the same was accepted on merits. A Contract dated 22.09.1998 was executed by and between the Superintending Engineer, Agra (on behalf of the Plaintiff) and the Respondent for consideration of Rs. 48,55,800/-. The construction was to be completed within a span of 12 months from the date of said Contract.

Due to some differences between both the Parties, the Respondent invoked the Arbitration Clause and filed its Statement of Claim and the Appellant- original Plaintiff filed its Counter Affidavit. After hearing both the Parties, the Arbitral Tribunal published its Award dated 17.04.2020 (Arbitral Award), thereby allowing the Claim Petition filed by the Respondent and entitling him to recover a sum of Rs. 40,61,264/- from the Appellant-State Government.

Feeling aggrieved by said the Arbitral Award, the Appellant filed an Application under Section 34 of Arbitration and Conciliation Act, 1996 (Application for setting aside arbitral award) before the Court of District Judge, Agra. The District Court, did not find any infirmity or patent illegality in the Award and held that the Appellant failed to make out any of the grounds contained in Section 34(2) Arbitration and Conciliation Act, 1996 for setting aside the Arbitral Award, hence the Court vide Order and Judgement dated 26.04.2018, dismissed the Application filed by the Appellant-State Government.

Feeling dissatisfied by the Order of District Court, the Appellant filed an Appeal before the Hon’ble High of Judicature at Allahabad under Section 37 of the Arbitration and Conciliation Act (Appealable orders) on 09.07.2019. i.e 337 days beyond the limitation period. It is to be noted that the Appellant received the certified copy of the Order dated 26.04.2018 on 09.05.2018 .

Along with Appeal, the Appellant also filed an Application for Condonation of Delay under Section 5 of Limitation Act, 1963 (Extension of prescribed period in certain cases), with an Affidavit. As per the High Court, the explanation given in support of Condonation of Delay in filling of Appeal was not a sufficient one.

The High Court relied on a case ‘Basawaraj and Anr. v. Special Land Acquisition Officer’ and observed that ‘sufficient cause means that the party should not have acted in a negligent manner’. It further added that ‘the Applicant must satisfy the court that he was prevented by any sufficient cause from prosecuting his case, and unless a satisfactory explanation is furnished, the court should not allow the Application for Condonation of Delay ’. Due to insufficient cause for delay in filling of Appeal, the High Court dismissed the Appeal vide Order dated 27.01.2021.

Feeling aggrieved by the Impugned Order dated 27.01.2021, the Appellant preferred the present Appeal before the Hon’ble Supreme Court. The Apex Court after hearing the contentions of the Appellant, observed that the court while considering an application under Section 5 of the Limitation Act, may also look into the prima facie merits of an appeal. However in the present case, the Appellant failed to make out a strong prima facie case for Appeal. Therefore, the courts are not obliged to hear the appeal on merits if the same is barred by limitation.