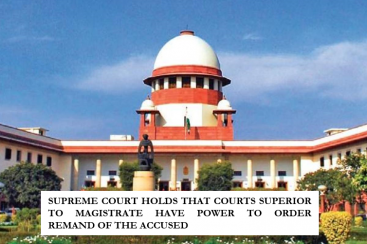 The Two Judge Bench of the Hon’ble Supreme Court of India comprising of Justices Uday Umesh Lalit and KM Joseph passed a Judgment dated 12-05-2021 in the case of Gautam Navlakha v. National Investigation Agency {2021 SCC OnLine SC 382} and held that the courts superior to that of the Magistrate can also exercise power under Section 167 Code of Criminal Procedure 1973 (Cr.P.C) (Procedure when investigation cannot be completed in twenty-four hours) to order for remand of the accused.

In the present case, some activists, including Mr. Gautam Navlakha (Appellant), had made inflammatory speeches and provocative statements at the Elgar Parishad Meet in Pune on 31-12- 2017, which led to violence at Koregaon Bhima Pune District the next day. On 28-08-2018, he was arrested from his residence in Delhi for offence under the Unlawful Activities (Prevention) Act, 1967. The Police further approached the Chief Metropolitan Magistrate (CMM) at Saket, Delhi and sought remand of the Accused-Appellant for taking him to Pune for the purpose of producing him before the competent Court of Ld. Special Court, Shivaji Nagar, Pune, Maharashtra that has jurisdiction to try the case (Transit Remand). The CMM ordered a Transit Remand, directing the Appellant to be kept in Police Custody for 2 days.

Meanwhile, the Accused-Appellant moved a Writ of Habeas Corpus in the High Court of Delhi (High Court). A Writ of Habeas Corpus is in the nature of an order upon the person who has detained another to produce the latter before the court, in order to let the court know on what ground he has been confined and in case there is no legal justification for the imprisonment, to set him free.

“The Petitioner shall, in the meanwhile, be kept at the same place from where he was picked up with two guards of the Special Cell, Delhi Police along with local Police that was originally here to arrest the petitioner, outside the house. Barring his lawyers, and the ordinary residents of the house, the petitioner shall not meet any other persons or step out of the premises till further orders.”

On 02-10-2018, a Writ Petition was filed before the Hon’ble Supreme Court of India against the high-handed action of the Maharashtra Police and the arrest of five activists from their homes. The Appellant who was kept under house arrest for 34 days in the year 2018, had sought default bail on the ground that an order for remand under Section 167 Cr.P.C can be passed by a Magistrate only and not by High Court. Further, the Accused argued that although the High Court set aside the Transit Remand which would have lasted for two days, but the High Court ordered for House Arrest which has continued for 34 days. This has deprived his right to personal liberty under Article 21 of the Constitution of India 1950. Further, as per Section 167 (2) Cr.P.C., the Magistrate may authorise the detention of the accused for a term not exceeding fifteen days. However, in this case, the Accused already underwent house arrest for 34 days. Therefore, the Order for House Arrest being in the nature of custody under Section 167 Cr.P.C., it cannot be permitted to continue beyond the stipulated time period.

After taking into consideration, the arguments advanced by the Parties to the dispute, the Apex Court observed “that though the power is vested with the Magistrate to order remand by way, of appropriate jurisdiction exercised by the superior Courts, (it would, in fact, include the Court of Sessions acting under Section 439) the power under Section 167 could also be exercised by Courts which are superior to the Magistrate.”  Thus, the Supreme Court held that the High Court can exercise power under Section 167 Cr.P.C. to order for remand/custody of the Accused-Appellant.

In view of the fact that the Order of House Arrest of the Appellant did not fall under the ambit of Section 167 Cr.P.C, the Hon’ble Supreme Court dismissed the Appeal.