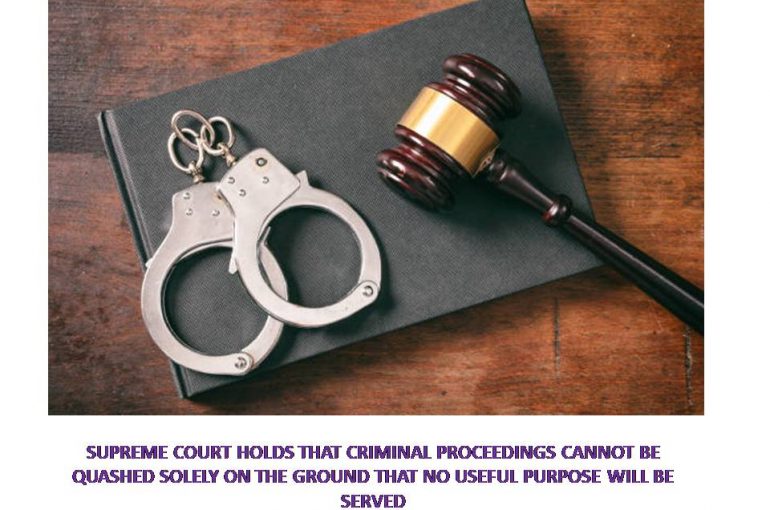 In a recent Criminal Appeal, a two Judge Bench of the Supreme Court comprising of Justice M.R Shah and Justice B.V. Nagarathna passed an Order and Judgement dated 17.05.2022 in Satish Kumar Jatav vs State of Uttar Pradesh & Ors.  (Criminal Appeal No. 770 of 2022) and  set aside the Order dated 19.09.2019 (Impugned Order)  passed by the High Court of Judicature at Allahabad and held that criminal proceedings cannot be quashed merely on the ground that no useful purpose will be served.

In the present case, the Appellant- original Complainant filed an Application No. 390/11 of 2004 under Section 156 (3) (Any Magistrate empowered under section 190 may order such an investigation as above-mentioned) Code of Criminal Procedure (CrPC) against the Respondent-original Accused for the incident that occurred on 11.09.2004. The said Application was filed when the local Police Station i.e Police Station Inchauli, District Meerut refused to lodge an FIR (First Information Report). The Learned Magistrate vide Order dated 04.10.2004 directed the Station House Officer (SHO) to register an FIR against the Accused Persons for the offences punishable under Sections 307 (Attempt to murder), 504 (Intentional insult with intent to provoke breach of the peace), 506 (Punishment for criminal intimidation) of the Indian Penal Code (IPC) and Section 3 (10) (Intentionally insults or intimidates with intent to humiliate a member of a Scheduled Caste or a Scheduled Tribe in any place within public view), Section 3 (15) (Forces or causes a member of a Scheduled Caste or a Scheduled Tribe to leave his house, village or other place of residence, shall be punishable with imprisonment for a term which shall not be less than six months but which may extend to five years and with fine.) of the Scheduled Castes and Scheduled Tribes (Prevention of Atrocities) Act (Act).

In compliance with the Order dated 04.10.2004, an FIR bearing Criminal Case No.7 of 2004 for the aforesaid offences was registered. After conducting the investigation, a Closure Report was filed by the I.O. The Appellant- Complainant alleged that the police personnel were colluding with the Accused Persons and he was doubtful about the investigation that has been conducted. After the Magistrate received the Final Report, a notice was issued to the Complainant. The Complainant filed a Protest Petition against the Final Report. The Magistrate vide Order 21.07.2005 rejected the Final Report. The proceedings arising from the Final Report was merged into the proceedings of Criminal Complaint Case No.2365 of 2004 pending before the court of Learned Special Chief Judicial Magistrate, Meerut. The Learned Magistrate vide Order dated 04.02.2008 directed to issue summons to the Accused Persons to face the trial for the offences punishable under Sections 307, 504 , 506 of the IPC and Section 3(10)(15) of the Act

Being aggrieved by the Order dated 04.02.2008, the Respondents- original Accused Persons preferred a Criminal Misc. Application No. 14607 of 2008 and prayed for quashing the proceedings under Section 482 CrPC (Saving of inherent powers of High Court). The High Court vide Order dated 16.09.2019, quashed the Criminal proceeding against the Respondents.

Being dissatisfied by the Impugned Order dated 16.09.2019 passed by the High Court, the Appellant- original Complainant preferred an Appeal before the Hon’ble Supreme Court. The counsel for the Appellant submitted that, the Order passed by the High Court, quashing the proceedings pending against the Respondents- Accused Persons was cryptic and non-reasoned in nature. It was further submitted that the Learned Magistrate after due application of mind had recorded the statements of the witnesses and had further directed issuance of summons to the Respondents- Accused Persons to face the trial.

The Apex Court after hearing the respective parties, observed that the  Impugned Order dated 16.09.2019, wherein they quashed the criminal proceeding against the Respondents was unsustainable both in law as well as on the facts. The Supreme Court also added that, there was no further discussion by the High Court on the allegations made against the Respondents and validity of the Order dated 04.02.2008 passed by the Magistrate.

In view of the above reasons the Appeal preferred by the Appellants against the Impugned Order was allowed and the Impugned Order passed by the High Court under Section 482 Cr.P.C. in Criminal Misc. Application No.14607 of 2008 was hereby quashed and set aside.