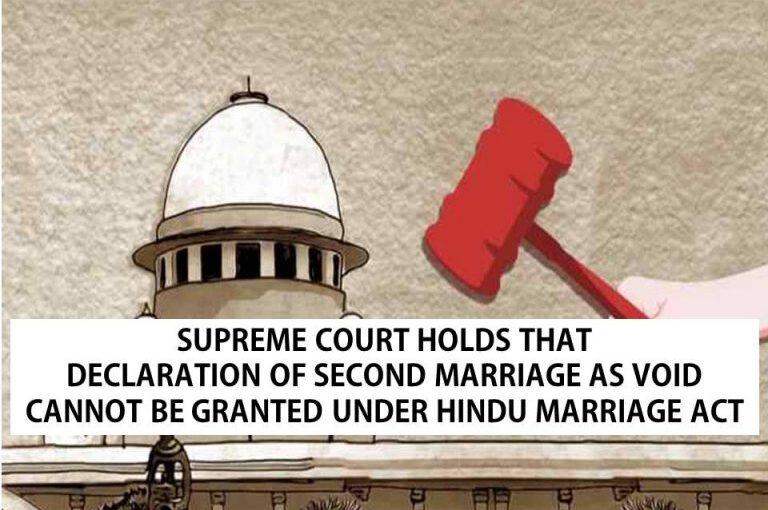 The Hon’ble #SupremeCourt of India in the case of Nitaben Dinesh Patel vs Dinesh Dahyabhai Patel (2021 SCC OnLine SC 902) vide its #Judgment dated 07.10.2021 held that only those claims which can be prayed and/or granted under the #HinduMarriageAct, 1955 can be claimed by way of #CounterClaim as per Section 23A (Relief for respondent in #divorce and other proceedings) of the Hindu Marriage Act, 1955.

In the present case, one Nitaben Dinesh Patel (the ‘Appellant’) got married to Dinesh Dahyabhai Patel (the ‘Respondent’) in 1987. Out of the said wedlock, they had a child in 1990. Disputes arose between the Respondent-Husband and the Appellant-Wife. As a result, the Respondent filed a Hindu Marriage Petition No. 862/2007 before the learned Family Court under Section 13 of the Hindu Marriage Act, 1955 (the ‘Act, 1955’) for dissolution of marriage, mainly on the ground that the Appellant-Wife is guilty of cruelty. The Appellant-Wife filed a Reply in the matter and accordingly, Rejoinder was filed by the Respondent. The Appellant stated in her Reply that the Respondent is cohabiting with another woman, openly moves around with the said woman and introduces the said lady as his new wife. It was further stated that he also travels not only in the country but abroad with her. Since the Respondent-Husband wants to marry the said woman, a false and fabricated story is placed before the Court against the Appellant.

The Respondent stated in his Rejoinder that the said lady is a manager in the hospital run by him and she is looking after the hospital and accounts as her job, which has nothing to do with the present dispute between the Parties.

Later, the Appellant got to know that the Respondent had already married the said lady in 2006 and had suppressed this fact from the Court. As a result, the Appellant before the Family Court filed an Application for Amendment of Counter Claim and sought permission to add new paragraphs numbered as 35, 36, and 37 as per Section 23A (Relief for respondent in divorce and other proceedings) of the Act, 1955.

The learned Family Court vide its Order dated 08.05.2018 partly allowed the Application for amendment and allowed the amendments by permitting the Appellant-Wife to only incorporate Paras 35 and 36 in the Written Statement. However, the Court refused to permit the Appellant-Wife to amend the Written Statement to incorporate Para 37.

The Appellant challenged the Family Court Order dated 08.05.2018 and filed Special Civil Application (SCA) before the High Court of Gujarat at Ahmedabad (the ‘High Court’). The High Court vide its Judgment dated 27.09.2019 dismissed SCA No. 11379/2018 on the ground that the amendment could not be allowed at this belated stage. However, the High Court in the impugned Judgment and Order has observed that the Appellant can file a separate suit seeking for a declaration that the second marriage of the Respondent-Husband as void.

The Appellant challenged the High Court Judgment dated 27.09.2019 before the Supreme Court of India. The Supreme Court noted that the proposed prayer in terms of Para 37, to declare that the second marriage between the Respondent-Husband and Hina Panchal is illegal, void and voidable, was prayed by way of Counter Claim and for that Section 23A (Relief for respondent in divorce and other proceedings) of the Act, 1955 was relied upon.

The main issue before the Supreme Court was whether the Appellant could have claimed the relief sought qua Para 37 by way of counter claim in a Divorce Petition filed by the Respondent for dissolution of the marriage?

In view of the above, the Supreme Court finally allowed the Appeal filed by the Appellant and set aside the High Court Order dated 27.09.2019 restoring the Family Court Order dated 08.05.2018. The Appellant was therefore allowed to amend the Reply as prayed under Para 35 and 36. However, Amendment sought as per Para 37 was dismissed by the Apex Court with liberty to initiate separate proceedings for such reliefs.