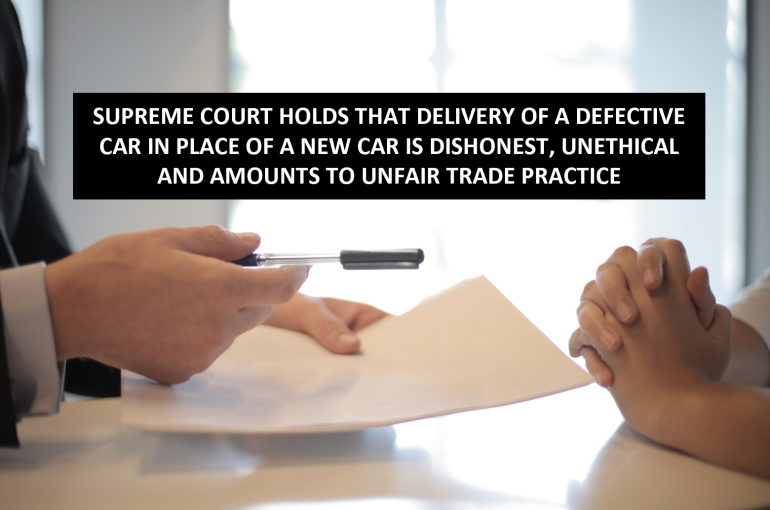 SUPREME COURT HOLDS THAT DELIVERY OF A DEFECTIVE CAR IN PLACE OF A NEW CAR IS DISHONEST, UNETHICAL AND AMOUNTS TO UNFAIR TRADE PRACTICE

A two Judge Bench of the Hon’ble Supreme Court of India comprising of Justice M.R. Shah and Justice Krishna Murari passed a Judgment dated 08.09.2022 in the case of Rajiv Shukla  v. Gold Rush Sales and Services Ltd. & Anr. [Civil Appeal No. 5928 of 2022] and held that delivering a used and a defective car against a booking for a new car amounts to unfair trade practice and is dishonest and unethical.

The State Consumer Disputes Redressal Commission (SCDRC/State Commission) upheld the order passed by the District Forum. However, the National Consumer Disputes Redressal Commission (NCDRC/National Commission) in the Revision Petition No.2082   of   2015 that was filed against the order of District Forum and SCDRC, set aside the findings of facts of both the Forums that the car delivered was a used car, vide Impugned Judgment and Order dated 04.01.2016.

The Complainant/Appellant challenged the Impugned Judgment and Order dated 04.01.2016 before the Hon’ble Supreme Court.

The Apex Court after taking into consideration the facts and contentions raised by the Parties to the dispute, observed that the District Forum and the State Commission were absolutely justified in directing the Respondent No.1 to replace the delivered car and to deliver a new car as the Complainant/Appellant had paid the total sale consideration of a new car and the dealer was supposed to and bound to deliver the new car. The delivery of a defective car was also not permissible. The Supreme Court held that:

The Apex Court also held that the NCDRC is vested with the powers of Revision under Section 21 of the Consumer Protection Act, 1986 (Act).

Section 21of the Act is reproduced below for easy reference:

(i) complaints where the value of the goods or services and compensation, if any, claimed exceeds [rupees one crore]; and

(ii) appeals against the orders of any State Commission; and

The Bench observed that:

“7.1…..In   exercising   of revisional   jurisdiction   the   National   Commission   has   no jurisdiction to interfere with the concurrent findings recorded by the District Forum and the State Commission which are on appreciation of evidence on record.   Therefore, while passing the impugned judgment and order the National Commission has   acted   beyond   the   scope   and   ambit   of   the   revisional jurisdiction conferred under Section 21(b) of the Consumer Protection Act….”

Thus, while allowing the Appeal, the Apex Court set aside the Impugned Judgment and Order dated 04.01.2016 passed by the NCDRC and held that non delivery of a new car can be said to be an unfair trade practice and it shows dishonesty on the part of the dealer which is against morality and ethics.

Accordingly, the Respondent No.1 was directed to deposit Rs 1 Lakh within a period of six weeks from the date of the Judgment with the Registry of the Court. On such deposit   Rs.50,000/­ shall be paid to the Appellant   herein   towards  the   costs/litigation   cost   etc.   and Rs.50,000/­ to be transferred to the Mediation and Conciliation Project Committee, Supreme Court   of   India, New Delhi.

The Apex Court coming to the rescue of the Appellant clearly establishes the importance of consumer rights. Though consumer courts have a summary trial, they have by and large been able to render expeditious justice to the consumer. Possibly, higher costs and compensation amounts would go a long way to deter the seller or service provider from cheating the consumer.