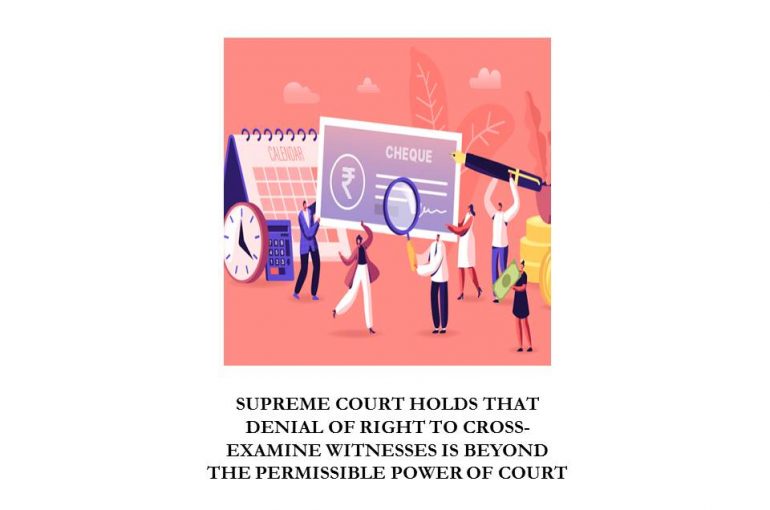 A three Judge Bench of the Hon’ble Supreme Court of India comprising of Justice Uday Umesh Lalit, Justice S. Ravindra Bhat and Justice Sudhanshu Dhulia passed a Judgment dated 02-08-2022 in the case of Noor Mohammed v. Khurram Pasha (Arising out of S.L.P. (Criminal) Nos.2872 of 2022) and held that denial of Appellant-Borrower’s right to cross-examine the Respondent-Lender/Witnesses under Section 143A (Power to direct interim compensation) of the Negotiable Instruments Act, 1881 (Act) is beyond the permissible power of Court.

Subsequently, the Complaint was accepted by the Trial Court vide Order dated 29-11-2019 and Appellant-Borrower was held guilty under Section 138 (Dishonour of cheque for insufficiency, etc., of funds in the account) of the Act. The Appellant-Borrower was directed to pay fine in the sum of Rs.7,00,000/-, in default whereof to undergo simple imprisonment for six months. Out of the aforesaid sum, Rs.5,000/- was to be remitted to the State while the remaining amount of Rs.6,95,000/- was directed to be made over to the Respondent-Lender as compensation under Section 357 (Order to pay compensation) of the Criminal Procedure Code, 1973 (Cr.P.C.)

Aggrieved, the Appellant-Borrower filed an Appeal being Criminal Appeal No. 190 of 2019 in the Court of V Addl. District and Sessions Judge, Mandya (Appellate Court), however the Appellate Court dismissed the Appeal vide Order dated 28-10-2020. The Order of Conviction and Sentence passed by the Trial Court was affirmed.

Thereafter, the Appellant-Borrower filed Criminal Revision Petition No. 39 of 2021 in the High Court of Karnataka at Bengaluru (High Court). The High Court vide Judgment and Order dated 17-12-2021 dismissed the said Criminal Revision Petition and affirmed the view taken by the Trial Court and the Appellate Court. It was observed that “the conduct of the Appellant-Borrower in not depositing the interim compensation as directed, showed that he was only interested in protracting the proceedings for one reason or the other.”

The Bench after perusing the facts and submissions made by the Parties to the dispute, placed reliance on Section 143A of the Act, which is reproduced below for easy reference:

“143A. Power to direct interim compensation. –

(1) Notwithstanding anything contained in the Code of Criminal Procedure, 1973 (2 of 1974), the Court trying an offence under section 138 may order the drawer of the cheque to pay interim compensation to the complainant – (a) in a summary trial or a summons case, where he pleads not guilty to the accusation made in the complaint; and (b) in any other case, upon framing of charge.

(2) The interim compensation under sub-section (1) shall not exceed twenty per cent of the amount of the cheque.

(3) The interim compensation shall be paid within sixty days from the date of the order under sub-section (1), or within such further period not exceeding thirty days as may be directed by the Court on sufficient cause being shown by the drawer of the cheque.

(4) If the drawer of the cheque is acquitted, the Court shall direct the complainant to repay to the drawer the amount of interim compensation, with interest at the bank rate as published by the Reserve Bank of India, prevalent at the beginning of the relevant financial years, within sixty days from the date of the order, or within such further period not exceeding thirty days as may be directed by the Court on sufficient cause being shown by the complainant.

(5) The interim compensation payable under this section may be recovered as if it were a fine under section 421 of the Code of Criminal Procedure, 1973 (2 of 1974).

The Supreme Court passed the Judgment dated 02-08-2022 and observed as follows:

“14. The concerned provision nowhere contemplates that an accused who had failed to deposit interim compensation could be fastened with any other disability including denial of right to cross-examine the witnesses examined on behalf of the complainant. Any such order foreclosing the right would not be within the powers conferred upon the court and would, as a matter of fact, go well beyond the permissible exercise of power.

15. Since the right to cross-examine the Respondent-Lender was denied to the Appellant-Borrower, the decisions rendered by the courts below suffer from an inherent infirmity and illegality.”

In view of the aforesaid observations, the Apex Court allowed the Appeal and concluded as follows:

1) Set aside the decisions of all three Courts with further direction that Complaint Case No. 244 of 2019 shall stand restored to the file of the Trial Court.

2) Trial Court to permit the Appellant-Borrower to cross-examine the Respondent-Lender and then take the proceedings to a logical conclusion.