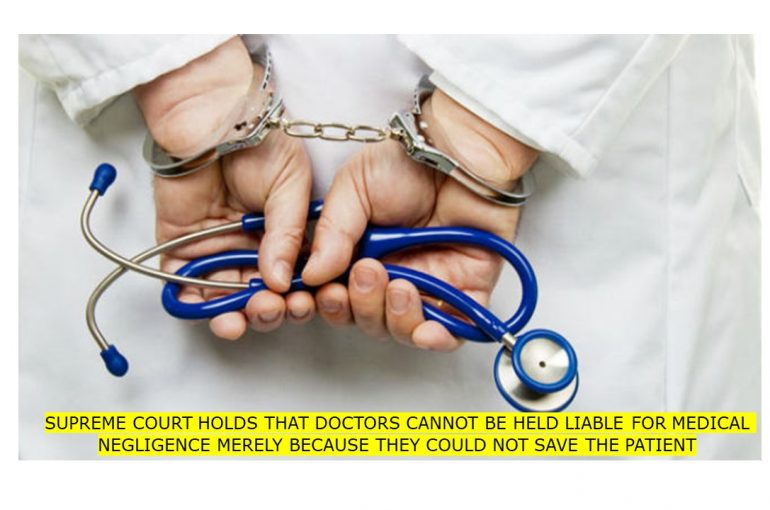 A Division Bench of the Supreme Court, comprising of Justice Ajay Rastogi and Justice Abhay S. Oka, on 19.04.2022, held that Doctors cannot be held liable for medical negligence merely because they could not save the patient, while deciding the case of Dr. (Mrs.) Chanda Rani Akhouri & ors. v. Dr. M.A. Methusethupathi & ors., CIVIL APPEAL NO(s).6507 OF 2009.

In this case, one Naveen Kant (deceased) was undergoing kidney-dialysis at a hospital in Delhi, under the supervision of one Dr. Gulati. He then underwent kidney transplant which was performed under the supervision of Dr. M.A. Muthusethupathi (Respondent), at Madras on 12.11.1995. The Respondent was performing the transplant after going through the entire medical record and after completion of all legal formalities as being contemplated under the provisions of the Transplantation of Human Organs and Tissues Act, 1994 (“the Act 1994”). The deceased was discharged from hospital on 24.11.1995. However, he died on 03.02.1996.

A complaint was filed by the wife of the deceased (Complainant/ Appellant) before the National Consumer Disputes Redressal Commission (NCDRC). The complaint of the Appellant was that the deceased was asked to attend as an outdoor patient for dressing of the wound at the place of incision, but his complaint throughout was that while he was in ICU, he had a pain in his left forearm where intravenous drugs were injected and at the given time, he was assured that the pain would subside in due course of time and as and when the Respondent doctor came for review, pain in the left forearm was the consistent complaint of Naveen Kant.

On 30.11.1995, the Respondent noticed the onset of cellulitis in Naveen Kant’s left forearm and there was a recurrence of abscess at other points, but still the doctors did not take it seriously and conducted investigations into the cause of pain and later on 16.12.1995, Naveen Kant developed severe headache coupled with loss of proper vision in the right eye and also started vomiting. Later, more complications crept in and ultimately, he died on 03.02.1996.

According to the Appellant, the death of Naveen Kant was the cause of post-operative negligence and follow up care on the part of the doctors and the nursing staff of the hospital who had not provided proper medical care to Naveen Kant and hence the Appellant attributed negligence on the part of the treating doctors and the hospital and claimed special damages/ general damages for a total sum of Rs.95,16,174.33/-.

The Respondents in the counter-affidavit claimed that he was a professional trained and skilled senior doctor and all the doctors who performed the transplant were experienced and had performed several kidney-transplants. The Respondents also claimed that the hospital where kidney transplantation was performed, was duly registered hospital under the Act,1994 and was a fully equipped hospital for transplantation and patient Naveen Kant after successful surgery of the kidney transplantation and after 12 days in ICU with all medical protocols followed and taking into consideration his overall health, discharged on 24.11.1994.

The NCDRC, after taking into consideration the pleadings and the evidence on record arrived at the conclusion that the patient Naveen Kant was under the hands of the expert team of doctors and good medical care at the command of the doctors was fully administered to him and after being discharged from the hospital on 24.11.1995. Thereafter, he continued to be under treatment and merely because the expert team of doctors could not save him after his prolonged illness and he died on 03.02.1996 could not be considered to be a case of post operative medical negligence and in consequence thereto dismissed the complaint filed at the instance of the Appellants by Judgment dated 21.07.2009. The Appellant, then preferred an appeal before the Supreme Court against this Judgement.

The Supreme Court, after considering the evidence and witnesses, observed that the doctors can provide their best medical assistance available at their command but merely because they could not save the patient, could not be considered to be a case of post operative medical negligence despite the fact that medical protocol administered by them was duly supported by the two medical experts of the field who appeared on behalf of the Respondents, and nothing elicits from the cross-examination made by the Appellants. The Apex Court referred to the Judgement of the case Jacob Mathew v. State of Punjab and Another, (2005) 6 SCC 1, where it was held that “Negligence in the context of the medical profession necessarily calls for a treatment with a difference. To infer rashness or negligence on the part of a professional, in particular a doctor, additional considerations apply. A case of occupational negligence is different from one of professional negligence. A simple lack of care, an error of judgment or an accident, is not proof of negligence on the part of a medical professional. So long as a doctor follows a practice acceptable to the medical profession of that day, he cannot be held liable for negligence merely because a better alternative course or method of treatment was also available or simply because a more skilled doctor would not have chosen to follow or resort to that practice or procedure which the accused followed.”

The Supreme Court then relied on the case of Dr. Harish Kumar Khurana v. Joginder Singh and Others, (2021) 10 SCC 291, in which it was held that “the hospital and doctors are required to exercise sufficient care in treating the patients in all circumstances. However, in an unfortunate case, death may occur. It will be necessary that sufficient material on medical evidence
should be available before the adjudicating authority to arrive at a conclusion that the death is due to medical negligence. Even death of a patient cannot, on the face of it, be considered to be medical negligence.”

After considering the judgements in the above-discussed cases, the Supreme Court held that a medical practitioner is not to be held liable simply because things went wrong from mischance or misadventure or through an error of judgment in choosing one reasonable course of treatment in preference to another. In the practice of medicine, there could be varying approaches of treatment. There could be a genuine difference of opinion. However, while adopting a course of treatment, the duty cast upon the medical practitioner is that he must ensure that the medical protocol being followed by him is to the best of his skill and with competence at his command. At the given time, medical practitioner would be liable only where his conduct fell below that of the standards of a reasonably competent practitioner in his field. The term “negligence” has no defined boundaries and if any medical negligence is there, whether it is pre or post-operative medical care or in the follow-up care, at any point of time by the treating doctors or anyone else, it is always open to be considered by the Courts/Commission taking note of the exposition of law laid down by this Court of which a detailed reference has been made and each case has to be examined on its own merits in accordance with law.

Therefore, the Apex Court, after observing the fact that treating doctors, were medical experts in the field of nephrology and the hospital where the patient was admitted for transplantation was duly registered under the Act, 1994 and all post operative medical care protocol available at the command of the Respondents was administered to the patient, still his physical condition deteriorated and finally he could not be saved, and thus the Apex Court dismissed the Appeal.

The Supreme Court has consistently held that if the line of treatment administered by a hospital is as per medical protocol the same will not be deemed to be negligence. However, the Court has drawn a distinction between treatment and death that may have resulted for multifarious reasons. The Court held that doctors can provide their best medical assistance available at their command but merely because they could not save the patient, it cannot be deemed to be act of negligence.