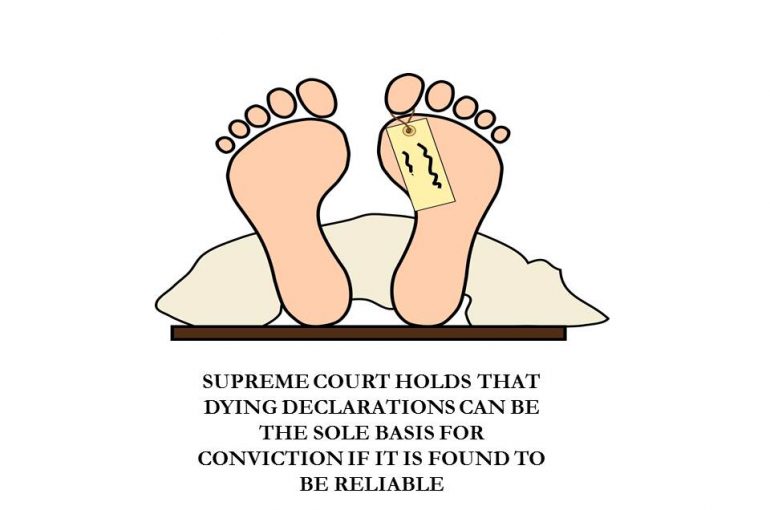 A two Judge Bench of the Hon’ble Supreme Court of India comprising of Justice B.R. Gavai Justice Pamidighantam Sri Narasimha passed a Judgment dated 16-08-2022 in the case of Makhan Singh v. State of Punjab [Criminal Appeal No. 1290 of 2010] and observed that a dying declaration could be the sole basis for conviction and if it is found to be reliable and trustworthy, no corroboration is required.

In the present case, one Makhan Singh (Appellant) got married to one Manjit Kaur (Deceased) on 28-01-1996. It is the Prosecution case that the Appellant used to demand dowry from the Parents of the Deceased. Further, succumbing to the demands of the Appellant, an amount of Rs.30,000/­ was paid to him by the Parents of the Deceased. The Appellant again demanded an amount of Rs. 2,00,000/- and according to the Prosecution, utilized that amount for going to Moscow. However, after the Appellant came back from Moscow in March, 1998, he again started torturing the Deceased and asked her to bring Rs. 6,00,000/- as he wanted to go to the USA.

The Deceased, fed up with the torture consumed poisonous substance on 21-04-1998. The Deceased was taken by the Appellant initially to the Community Health Centre, Ladwa and   thereafter,   she   was   referred   to   L.N.J.P.   Hospital, Kurukshetra.  From L.N.J.P. Hospital, Deceased was taken to a private Nursing Home of Dr. H.K. Sobti (PW­1) at Kurukshetra, wherein she was admitted.

Judicial Magistrate, First Class, Kurukshetra (DW­1) recorded the first dying declaration of the Deceased (Ex. DO/C), wherein the Deceased stated that she was suffering from fever and since many medicines were lying on the Angithi, mistakenly, she took medicine of green colour.

On 24-04-1998, the Parents of the Deceased made a request for recording the statement of Deceased under Section 164 of the Criminal Procedure Code, 1973 (Cr.P.C.). On such a   request being  made,  Judical Magistrate, First Class, Kurukshetra (PW­6) recorded the statement of Deceased (Ex. PE) on 24-04-1998, wherein she stated that her husband had demanded Rs. 6 lakhs to go to USA.  According to this second dying declaration (Ex.   PE), the Appellant as well as his Parents administered the said poisonous substance to the Deceased.

On 28-04-1998, the Deceased was referred to PGIMS, Chandigarh, where she expired on 09-05-1998. Upon completion of the investigation and verification by the DSP (DW-2) who found the Accused innocent. The Sub-Inspector (PW­14), the IO herein was of the opinion that there were sufficient grounds for trial and therefore, he filed the charge ­sheet. Accordingly, charges were framed for the offence punishable under Section 304­B of the Indian Penal Code, 1860 (IPC).

The Trial Court in Sessions Case No. 55 of 1998 vide Order dated 13th/16th July, 2002 convicted the Appellant under Section 304­B of the IPC and was sentenced to undergo rigorous imprisonment for a period of 10 years.  However, the Trial Court found that the other co-accused i.e. Parents of the Appellant were entitled to get benefit of doubt and acquitted them.

Aggrieved, the Appellant filed an Appeal in the High Court of Punjab and Haryana at Chandigarh (High Court). The High Court   in Criminal   Appeal   No.1189­SB   of   2002 vide Order dated 15-05-2009 confirmed the conviction under Section 304­B of the IPC, it reduced sentence to 7 years.

Impugning the Judgment dated 15-05-2009, the Appellant filed an Appeal in the Hon’ble Supreme Court of India. The Apex Court after perusing the facts of the case framed the following issues:

The Bench observed that a dying declaration could be the sole basis for recording conviction and if it was found to be reliable and trustworthy, no corroboration was required.

The Supreme Court further stated that “in case there were multiple dying declarations and there existed inconsistencies between them, the dying declaration recorded by a higher officer like a Magistrate could be relied upon.”

The Apex Court opined that in case there were circumstances wherein the declaration was found to be made involuntarily and it was not supported by any other evidence, the Court was required to scrutinise the facts of the individual case very carefully and take a decision as to which of the declarations was worth relying upon.

In the instant case, the Supreme Court noted that there existed two dying declarations, which were totally inconsistent and contradictory to each other and both were recorded by Judicial Magistrates.

The Supreme Court further stated that–

“Apart from that, it is to be noted that on the basis of very same evidence, the trial court, by giving benefit of doubt, has acquitted the father and mother of the appellant. In that view of the matter, conviction of the appellant on the very same evidence, in our view, was improper…The benefit of doubt which has been given to the other accused by the trial court, ought to have been equally given to the present appellant when the evidence was totally identical against all the three accused.”

Thus, based on the above findings and observations, the Supreme Court acquitted the Appellant of all the Charges.