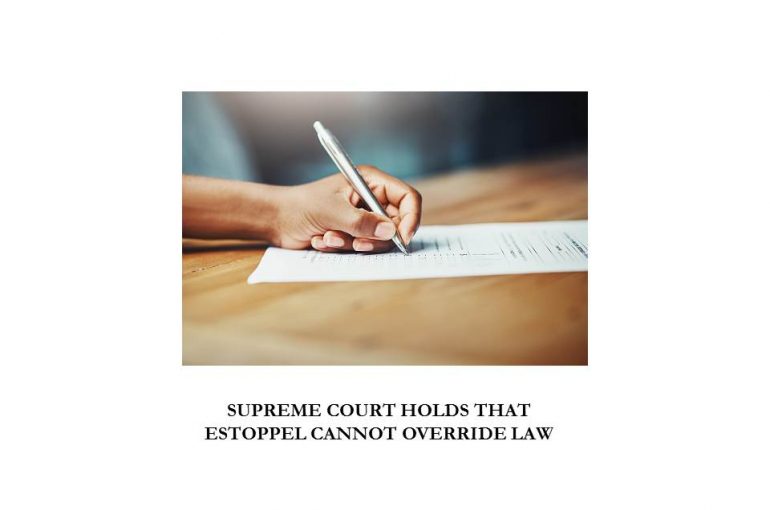 A two Judge Bench of the Hon’ble Supreme Court of India comprising of Justice Dinesh Maheshwari and Justice Vikram Nath passed a Judgment dated 16-06-2022 in the case of Krishna Rai (Dead) Through LRs & Ors. versus Banaras Hindu University Through Registrar & Ors (Civil Appeal Nos. 4578­4580 of 2022 (Arising out of S.L.P.(C) Nos.31186­88 of 2016) and reiterated that principle of estoppel or acquiescence will not apply in a selection process when it is held contrary to the relevant rules.

In the present case, the Banaras Hindu University, Varanasi (University) had issued a Notification/Advertisement dated 17-12-2005 inviting Applications   from   permanent Class­ IV employees for promotion as Junior Clerk in the pay ­scale   of   Rs.3050­-4590.  This Notification inviting Applications from Class IV employees for promotion to Class III had not prescribed that an interview will be conducted in addition to the typing test. The computer typing test was scheduled on 20-04-2006 However, upon a representation being made, the said computer type test was deferred vide letter dated 19-04-2006 and, later vide communication dated 04-05-2006, it was informed that final merit list would be based on the marks obtained in typing test, written test and interview.

In the Counter-Affidavit filed by the Respondents, the eligibility criteria as laid down in Para 6.4 of the Manual was not disputed. It was also admitted that it is only the Executive Council, which could have amended or modified the procedure/eligibility prescribed under Para 6.4 of the Manual and that the Board of Examiners was not vested with any authority to alter the procedure for promotion.

The learned Single Judge allowed the Writ Petition filed by the Appellants and quashed the Impugned Orders dated 05-06-2007 and 02-07-2007 after setting aside the promotion of Respondent Nos.3 to 16, had directed the Respondent No. 1 to carry out the exercise for promotion to the post of Class III and complete the same expeditiously within three months in accordance with the Rules and the observations made in the said Judgment. It   also   awarded   costs   quantified   at Rs.50,000/-. Aggrieved, an Appeal was filed by the Respondent No. 1 before the Division Bench. The Judgment passed by the Learned Single Judge was set aside by the Division Bench vide Judgment dated 29-07-2016 on the ground that since the Petitioners participated in the interview without protest, they are estopped from challenging the selection process subsequently. Therefore, the Writ Petition was dismissed.

Aggrieved   by   the same, the original Writ Petitioners filed Civil Appeals before the Hon’ble Supreme Court. The main issue that arose before the Apex Court whether principle of estoppel and acquiescence will prevail over statutory service rules prescribing the procedure for promotion of Class-IV employees to Class-III working in the University.

The Bench while placing reliance on Para 6.4 of the Manual which is reproduced below held that the Division Bench erred in applying the principal of estoppel.

“As   per   Para   6.4   of   the   Manual   duly approved by the Executive Council’s Resolution No.223 dated 2/3rd of November, 1980, all Class IV employees, who have put in five years’ service and who have passed matriculation examination or equivalent, would be eligible for promotion to the  post of Junior Clerk Grade. Such eligible candidates would be tested in a typing test in English/Hindi for a minimum speed of 30 words per minute.”

Where eligible candidates had passed the departmental written test of simple English, Hindi, and Arithmetic, but could not pass the typing test, they would still be eligible for promotion and be placed in the seniority list provided they qualify for the typing test within two years.

The Supreme Court observed that:

Therefore, based on above observations, the Apex Court allowed the Appeal and the Judgment passed by the Learned Single Judge was restored.