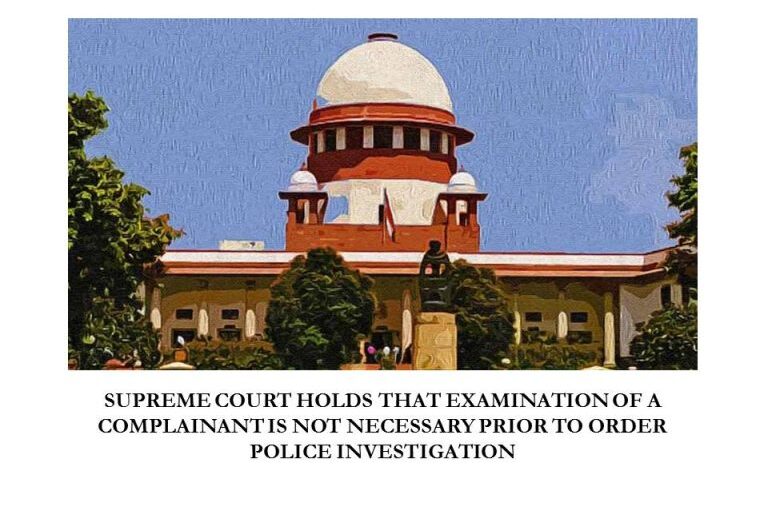 The Bench of the Hon’ble #SupremeCourt of India in the case of M/s Supreme Bhiwandi Wada Manor Infrastructure Pvt. Ltd. vs The State of Maharashtra & Anr. [LL 2021 SC 330], vide its Judgment dated 26.07.2021 reiterated and held that there is no requirement of #examining a #complainant on #oath under Section 200 of Criminal Procedure Code, 1973 (“#CrPC”) prior to the orders for #policeinvestigation by a #Magistrate under Section 156 (3) CrPC.

The brief facts relates to M/s Supreme Bhiwandi Wada Manor Infrastructure Pvt. Ltd. (‘Appellant’), which is a company engaged in construction of infrastructure projects. The Appellant was awarded a contract for constructing a road in 2015. In furtherance to the said project some lands belonging to farmers, were taken over for the purposes of construction of a road. The Respondents in this case were engaged by the Appellant as its employees. The responsibilities of the Respondents included identifying farmers on the basis of a list provided by Governmental authorities and to disburse compensation to them after verifying them authenticity of the claims.

The Appellant found out that the Respondents-Accused did not hand over the cheques due to the farmers for their lands and got the cheques released in the names of other persons thereby defrauding the Appellant Company and misappropriating its fund.

As a result, the Appellant filed a Complaint with the Powai Police Station, Mumbai alleging a fraud. Thereafter, the Appellant also filed a Complaint before the Court of the Magistrate at Andheri in Mumbai. The Metropolitan Magistrate Court, Andheri, Mumbai directed the police to investigate into the Complaint under Section 156(3) of the CrPC, vide its Order dated 11.05.2016. Accordingly, a First Information Report (FIR) was registered on 24.05.2016 for the alleged offences under Sections 418,419,420, 405, 467,468, 471, 474, 120 B read with Section 34 of the Indian Penal Code (‘IPC’).

The Appellant filed an appeal against the High Court Order dated 18.12.2017 before the Supreme Court under Article 136 of the Constitution. The Supreme Court held and observed as follows:

“12…power under Section 156(3) can be exercised by the Magistrate even before he takes cognizance provided the complaint discloses the commission of cognizable offence.”

In this view, the Supreme Court observed that the High Court in granting Anticipatory Bail under Section 438 of the CrPC has evidently lost sight of the nature and gravity of the alleged offence under the Complaint. The Supreme Court further observed that FIR sets out details of the alleged acts of fraud and misappropriation of funds. Accordingly, it held that examination of a complainant prior to ordering investigation under Section 156 (3) of the CrPC is not required therefore High Court Order dated 18.12.2017 was set aside as against a settled law.