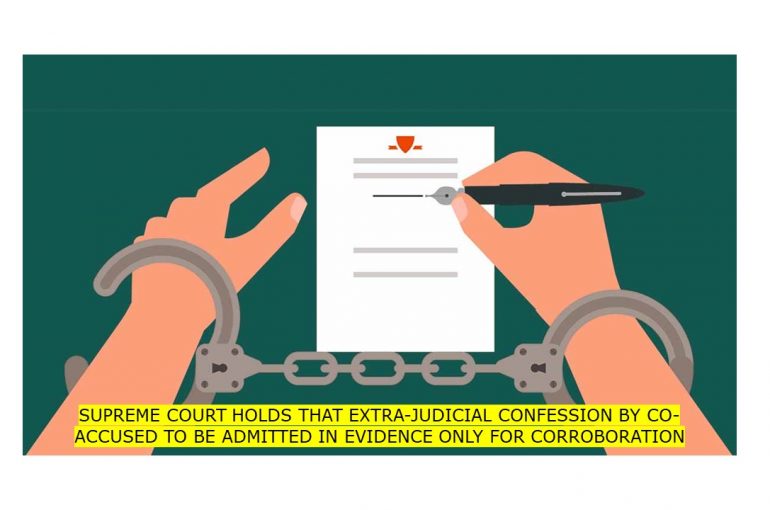 In a recent Criminal Appeal, a two Judge Bench of the Supreme Court comprising of Justice D.Y. Chandrachud and Justice Bela M. Trivedi passed an Order and Judgement dated 27.05.2022 in ‘Chandrapal v. State of Chhattisgarh Criminal Appeal No. 378 of 2015’ and set aside the Order and Judgement passed by the High Court of Chhattisgarh at Bilaspur in Criminal Appeal No. 1812 of 1998 and held that extra judicial confession made by the co-accused could be admitted in evidence only as a corroborative piece of evidence.

In this case, there was a love affair going on between one, Kumari Brindabai and one, Kanhaiya Siddar, which was not approved by the brother of Kanhaiya Siddar, Chandrapal (Accused No. 1) and father of Kumari Brindabai, Bhagirathi Kumhar (Accused No. 2). On 02.12.1994, both Kumari Brinda and Kanhaiya went missing. A search was made; however, no missing report was lodged. On 11.12.1994, the dead bodies of the deceased Kumari Brindabai and Kanhaiya were found hanging on a tree. A post-mortem was conducted and according to the post-mortem report, the cause of death was asphyxia due to hanging. As per the Prosecution, the Accused No. 1 Chandrapal called Kanhaiya and took him to his house, shut him down in a room and all the Accused i.e., Bhagirathi, Chandrapal, Mangal Singh (Accused No.3) and Videshi (Accused No.4) in furtherance of their common intention pressed his neck and committed his murder. Thereafter, the Accused Mangal Singh and Videshi committed the murder of Kumari Brinda. They then hanged the bodies on a tree to give the murder, a shape of suicide. The Sessions Court vide the Judgement and Order dated 03.08.1998, convicted all the Accused for offences under Sections 302 (Punishment for murder) and 201 (Causing disappearance of evidence of offence, or giving false information to screen offender) read with Section 34 (Acts done by several persons in furtherance of common intention) of the Indian Penal Code, 1860 (IPC).

The Accused No. 1, Chandrapal being aggrieved by the said Judgement and Order passed by the High Court preferred an Appeal before the Supreme Court.

The Apex Court, then examined the incriminating evidence relied upon by the Prosecution, that was the extra judicial confession made by the co-Accused Videshi. According to the Prosecution, the Accused No. 4 Videshi had made self-inculpatory (implying guilt) confession before some witnesses, involving the other Accused. The Prosecution had also produced an affidavit of Videshi, allegedly affirmed before the Notary.

The Supreme Court, further referred to Section 30 (Consideration of proved confession affecting person making it and others jointly under trial for same offence) of the Evidence Act, 1872, according to which, when more persons than one are being tried jointly for the same offence, and a confession made by one of such persons affecting himself and some other of such persons is proved, the court may take into consideration such confession as against such other person as well as against the person who makes such confession. The Apex Court, then went on to held that an extra judicial confession is a weak kind of evidence and unless it inspires confidence or is fully corroborated by some other evidence of clinching nature, ordinarily conviction for the offence of murder should not be made only on the evidence of extra judicial confession.

The Supreme Court thus having regard to the totality of evidence on record held that, the High Court committed gross error in convicting the Appellant-Accused Chandrapal for the alleged charge of Section 302 read with Section 34 of IPC, relying upon a very weak kind of evidence of extra judicial confession allegedly made by the co-Accused Videshi. Therefore, the Appellant-Accused No.1 was acquitted and as a result the Sessions Court and the High Court Judgement were set aside.