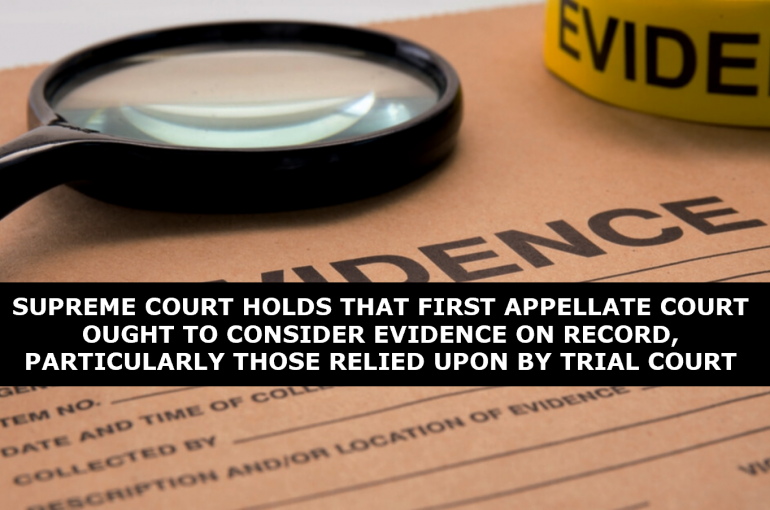 SUPREME COURT HOLDS THAT FIRST APPELLATE COURT OUGHT TO CONSIDER EVIDENCE ON RECORD, PARTICULARLY THOSE RELIED UPON BY TRIAL COURT

In a recent Civil Appeal, a two Judge Bench of the Supreme Court, comprising of Justice S. Abdul Nazeer and Justice Vikram Nath passed an Order and Judgement dated 13.06.2022 in ‘Somakka (Dead) by LRS. v. K.P.Basavaraj (Dead) By LRS., Civil Appeal No. 1117 of 2009’ and set aside the Order and Judgement dated 19.08.2006 passed by the High Court of Karnataka, and held that the first Appellate Court ought to consider evidence on record, in particular those relied upon by the Trial Court.

In this case, the Appellant was the sister of the sole Respondent. One Puttanna, the Appellant and the Respondent’s father had inherited certain properties from his father (Ancestral Property) and also had self-acquired property. The Appellant, in 1991, had instituted a Suit in the Court of City Judge, Bangalore in OS No. 2506 of 1991, against her brother, the Respondent, seeking partition of Ancestral Property and self-acquired properties of their father, who had died in 1974. The self-acquired property, was initially Devadaya Inamathi Land (Self-Acquired Property), which was claimed to have been exclusively occupied by Puttanna. Later, the Mysore (Religious and Charitable), Inams Abolition Act, 1955 was enacted and Puttanna had applied before the Revenue Authorities for occupancy rights. While the proceedings were pending before the Revenue Authorities, Puttanna died and the Respondent joined the proceedings.

The Respondent preferred an Appeal against this Judgement of the Trial Court under Section 96 of the Code of Civil Procedure, 1908 (CPC) (Appeal from original decree), before the High Court of Karnataka. The High Court vide Order and Judgement dated 19.08.2006, modified the Decree of the Trail Court and reduced the ½ share of the Appellant in the Self-Acquired Property to ¼ share. The High Court held that Respondent was jointly cultivating on the Self-Acquired Property along with his father and it had become a joint family estate and, accordingly, reduced the share of the Appellant.

Aggrieved of the High Court Order and Judgement dated 19.08.2006, the Appellant preferred an Appeal before the Supreme Court. The Apex Court observed that Section 96 of the CPC provides for filing an Appeal from original decree. Further Order 41 Rule 31 of the CPC provides for the contents of the judgment of the First Appellate Court. According to Order 41 Rule 31 CPC, the judgement of the Appellate Court shall be in writing and would include the points for determination, the decision thereon, the reasons for the decision and where the decree is reversed or varied, the relief to which the appellant is entitled etc.

The Supreme Court, further, discussed a catena of decisions on the scope, power and duty of the First Appellate Court in deciding an appeal under Section 96 CPC read with Order 41 Rule 31 CPC and held that the rule mandates that the judgment of the Appellate Court shall state the following points:

(a) points for determination;

(b) the decision thereon;

(c) the reasons for the decision; and

(d) where the decree appealed from is reversed or varied, the relief to which the appellant is entitled.

The Apex Court thus held that the High Court, in the present case committed a serious error in not forming the points for determination and not considering the evidence on record, in particular which had been relied upon by the Trial Court.