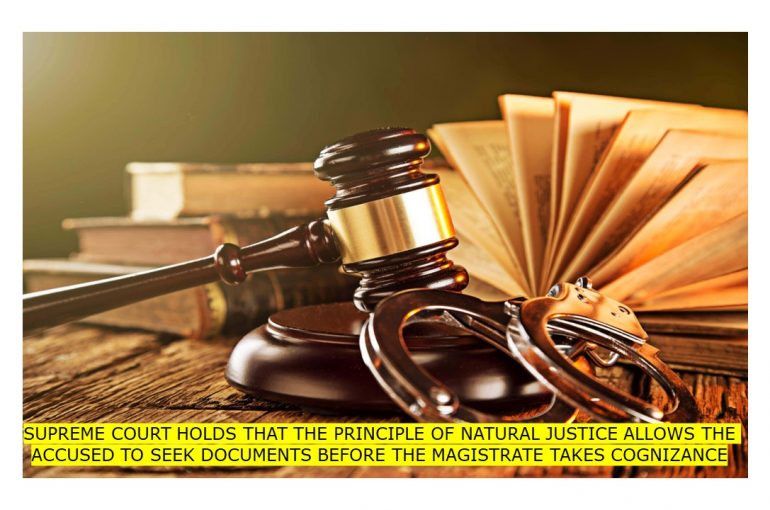 In a recent Criminal Appeal, a three-Judge Bench of the Supreme Court comprising of Chief Justice N.V. Ramana, Justice Krishna Murari and Justice Hima Kohli passed an Order and Judgement dated 20.05.2022 in ‘S.P. Velumani v. Arappor Iyakkam and Ors’ (Criminal Appeal No. 867 of 2022) and set aside the Order and Judgement dated 08.11.2021 (Impugned Order) passed by the Hon’ble High Court of Madras and held that the mandate of Section 207 of CrPC cannot be read as a provision etched in stone to cause serious violation of the rights of the accused as well as to the principles of natural justice.

In this case, the Appellant was a Cabinet-Minister in the State of Tamil Nadu. On 11.09.2018, one Mr. R.S. Bharathi filed a complaint for misuse of powers, with the Directorate of Vigilance and Anti-Corruption. He also filed a criminal petition before the Madras High Court, being Crl.O.P. No. 23428 of 2018. On the very next day, Respondent No.1 filed a complaint before Director, Directorate of Vigilance and Anti-Corruption and SP, Anti-Corruption Bureau, CBI. As no action was forthcoming by the aforesaid Authorities, Respondent No.1 filed a Writ Petition (WP No. 34845 of 2018) before the High Court to constitute a Special Investigation Team (SIT) for the purpose of investigation. Both the Writ Petition and Crl.O.P. No. 23428 of 2018, were tagged and heard together.

The Appellant, meanwhile, filed an application in the Writ Petition pending before the High Court, seeking a copy of the Preliminary Enquiry
Report dated 18.12.2019. The High Court vide impugned Order dated 08.11.2021, dismissed the Appellant’s application and disposed of the entire case, giving time to the State Government to investigate the matter.

The Supreme Court held that “it is a settled principle that the State cannot blow hot and cold at the same time. When the State Government changed its stand, the High Court neither provided the Appellant an opportunity to defend himself, nor sought a reasoned justification from the State for having turned turtle.” The Court further held that the principles of natural justice demanded that the Appellant be afforded an opportunity to defend his case based on the material that had exonerated him initially, which was originally accepted by the State. The mandate of Section 207 of CrPC that an accused is to be supplied copy of the documents after the Magistrate takes cognizance of the offence cannot be read as a provision etched in stone to cause serious violation of the rights of the appellant-accused as well as to the principles of natural justice.

Thus, the Apex Court directed the High Court to supply a copy of the Preliminary Report to the Appellant and to restore and decide the Writ Petition on merits.