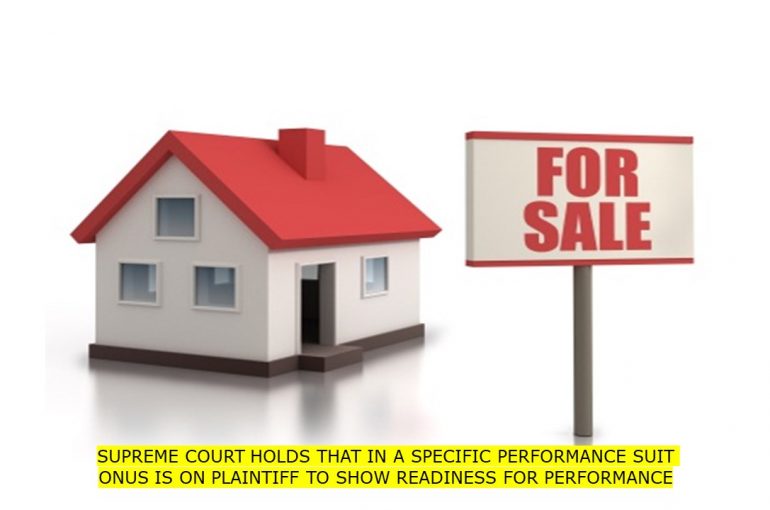 In a recent Special Leave Petition (Civil), a two Judge Bench of the Supreme Court, comprising of Justice Indira Banerjee and Justice Hrishikesh Roy passed an Order and Judgement dated 12.07.2022 in ‘U.N. Krishnamurthy (Since Deceased) through Lrs. V. A. M. Krishnamurthy, Special Leave Petition (Civil) No. 19463 of 2018’ and set aside the Order and Judgement dated 30.03.2017 passed by the High Court of Madras, and held that it is for the Plaintiff to prove his readiness and willingness to perform his obligations under the agreement in a suit for specific performance of contract.

On 17.10.2005, the Respondent filed a suit at the Court of Principal District Judge, Krishnagiri (Trial Court), for specific performance of an agreement for sale of the suit property. The Appellant contended that he did not agree to sell the suit property to the Respondent. The Trial Court by Order dated 30.11.2010 held that Respondent was ready and willing to perform his part of the contract, and thus entitled to the relief of specific performance.

The Appellant filed an Appeal in the High Court of Madras against this Order of the Trial Court challenging the Order on the ground that the Respondent was not ready with money and not in the position to perform his part of the contract and that he should not be allowed to get a decree for specific performance. The High Court by Order and Judgement dated 30.10.2017 upheld the Order dated 30.11.2010, passed by the Trial Court. The Appellant aggrieved by this Order filed an Appeal before the Supreme Court.

The Apex Court, further, after considering relevant case-laws and facts of the present case observed that in the present case the Respondent Plaintiff has failed to discharge his duty to prove his readiness as well as willingness to perform his part of the contract, by adducing cogent evidence. The Court held that acceptable evidence had not been placed on record to prove his readiness and willingness. Further, it was clear from the Respondent Plaintiff’s balance sheet that he did not have sufficient funds to discharge his part of contract in March 2003. The Supreme Court held that the Respondent were not entitled for specific performance and the Trial Court and High Court erred in granting the relief of specific performance to the Respondent.

The Apex Court, thus allowed the Special Leave Petition and set aside the Order of the High Court dated 30.10.2017.