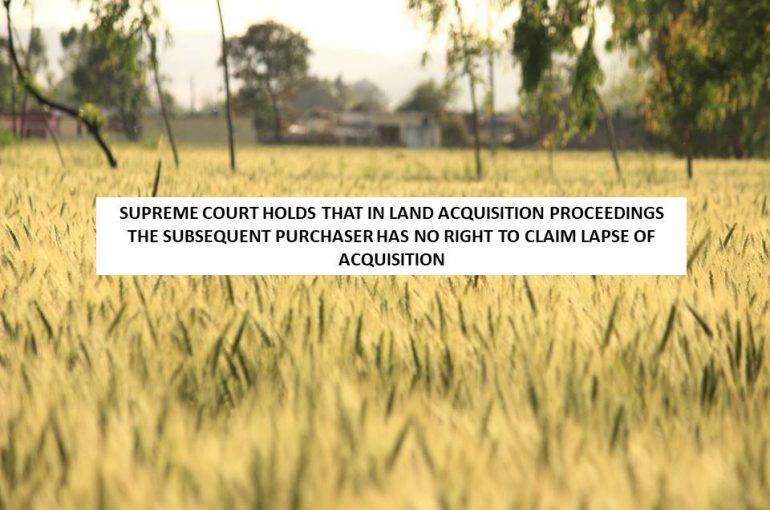 Recently, a two Judge Bench of the Supreme Court comprising of Justice M.R. Shah and Justice M.M. Sundresh passed a Judgment dated 04-11-2022 in Delhi Development Authority Vs. Damini Wadhwa & Ors. Civil Appeal No. 7962 OF 2022, and held that there cannot be any lapse of acquisition under Section 24(2) of the Right to Fair Compensation and Transparency in Land Acquisition, Rehabilitation and Resettlement Act, 2013 (“Act, 2013”) on the ground that possession was not taken over by the authority and/or the compensation was not be deposited / tendered due to the pending litigations.

In this case, Delhi Development Authority (“Appellant”) while exercising power under Section 4 (Publication of preliminary notification and powers of officers there upon) of Land Acquisition Act, 1894 (“Act”) issued Notice for land acquisition on 25.11.1980. Subsequently, declaration as per Section 6 (Declaration that land is required for a public purpose) of the Act on 07.06.1985 was delivered. Finally, the Collector granted Award as per the Compliance of Section 7 (After declaration, Collector to take order for acquisition) of the Act on 17.06.1987.

The landowners filed a number of litigations as a result of said acquisition and consequently the aforesaid notification proceedings were challenged by the subsequent person in interest by filing various Writ Petitions under the Delhi High Court (“High Court”). After Hearing, the High Court dismissed the Writ Petition vide Order dated 25.11.2004 and allowed acquisition proceedings.

It is to be noted that there was difference of opinion in one set of Writ Petition, thus it was referred to the third Judge. After hearing, the third Judge passed an Order dated 11.05.2007 and upheld the Acquisition Proceedings. Aggrieved by the Order, Damini Wadhwa (“Respondent”) filled a Writ Petition in the High Court submitting that the acquisition proceedings are deemed to have lapsed by operation of Section 24 (Land acquisition process under Act No. 1 of 1984 shall be deemed to have lapsed in certain cases) of the Right to Fair Compensation and Transparency in Land Acquisition, Rehabilitation and Resettlement Act, 2013 (“Act, 2013”) as neither the compensation has been paid nor the possession of the lands in question has been taken over.

The Counter was filled by the Appellant, and the position as a true owner of the Respondent was questioned. Additionally, it was contested that substantial possession with respect to most of the lands to be acquired were taken over. However, for some portions of the land, due to pending litigations, the possession/compensation could not have been done.

On merits of case, the High Court passed an Order dated 25.05.2017 declaring that the acquisition proceedings with respect to the lands in question is deemed to have been lapsed by virtue of Section 24 of the Act, 2013.

Aggrieved by the High Court, Appellant filled an Appeal before Supreme Court. The contentions of the Appellant were that the Respondent filed Writ Petition No. 11735 of 2016 based on the Agreement to Sell (“Agreement”) dated 22.05.2016 and that there is lot of time difference between acquisition proceedings which were initiated under the provisions of the Act, 1894 and the Agreement. Further, by said Agreement, Respondent can be considered as subsequent purchaser and this type of purchaser are not entitled to file deemed lapse acquisition Proceedings. Similarly, the Learned Counsel on behalf of the Respondent filed their contentions.

It is settled position of law that an Agreement to Sell does not itself confer any right, title, or interest. Further, the Appellant raised the doubt on genuineness of the transaction of the Agreement which ultimately questioned the locus of the Respondent and the same was overlooked by the High Court. Additionally, the Respondent can be said to be a subsequent purchaser as her interest was derived in the lands in question much after the acquisition proceedings were initiated via Notification dated 25.11.1980. Lastly, after relying upon Shiv Kumar & Anr. Vs. Union of India & Ors., (2019) 10 SCC 229, the Supreme Court held that the subsequent purchaser has no right to claim lapse of acquisition proceedings.