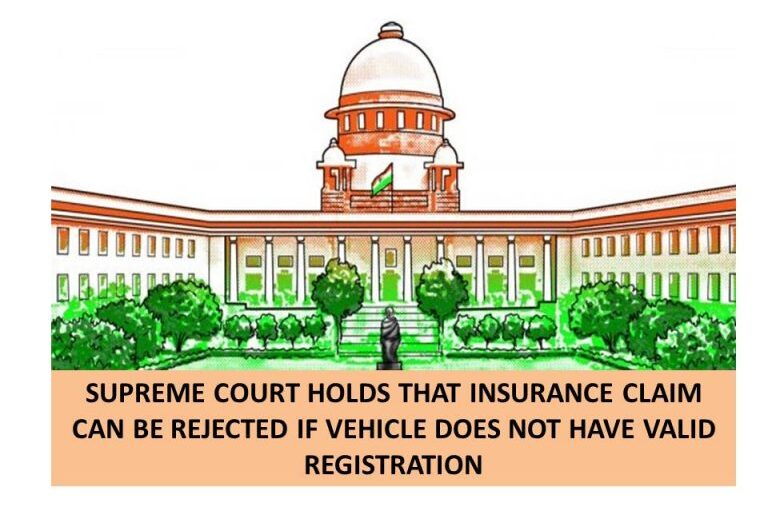 The three-Judges Bench of the Hon’ble #SupremeCourt of India in the case of United India Insurance Co. Ltd vs Sushil Kumar Godara (CA 5887 OF 2021), vide its #Judgment dated 30-09-2021 held that the #insuranceclaim can be rejected if the damaged #vehicle was used without a permanent #registration.

On 28-07-2011 the Respondent went to Jodhpur for business purposes and parked his vehicle outside the guest house premises. The Respondent found the next day that the Bolero car had been stolen. The Respondent lodged a first information report (FIR) with Police Station Ratanada, Jodhpur on 29-07-2011 alleging commission of offence under Section 379 (Theft) of the Indian Penal Code, 1860. The Police lodged a final report on 30-09-2011and informed the Appellant that the vehicle was untraceable.

As a result, the Respondent filed a Complaint before the District Consumer Protection Forum, Shri Ganga Nagar (the ‘District Forum’) for claiming the insured amount from the Appellant. The District Forum dismissed the Complaint and relying upon two previous orders of the NCDRC had concluded that if at the time of theft, the vehicle was not registered then the claim was not payable to the Complainant. It was held that repudiation of the claim by the Insurer did not amount to deficiency in service on its part.

The Respondent aggrieved and dissatisfied, challenged the District Forum decision before the State Commission. The State Commission set aside the Order of the District Forum and while allowing the Appeal held that “as the insurer had covered the complainant’s vehicle with particular engine and chassis number, and issued a policy during the currency of which, the vehicle was stolen it could not repudiate the insured’s genuine claim on technical, petty and frivolous grounds of absence of permanent registration certificate from the competent authority and thus escape its liability to indemnify the insured for the loss of the vehicle.”

Therefore, the State Commission directed the Insurer to pay a sum of Rs. 6,17,800/- along with 9% interest per annum from the date of filing of the Complaint and Rs. 20,000/- as litigation costs to the Respondent. The Appellant filed a Revision Petition against the decision of the State Commission before the National Consumer Dispute Redressal Commission (‘NCDRC’), which was dismissed.