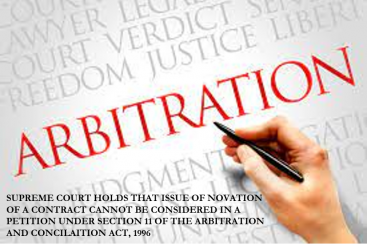 SUPREME COURT HOLDS THAT ISSUE OF NOVATION OF A CONTRACT CANNOT BE CONSIDERED IN A PETITION UNDER SECTION 11 OF THE ARBITRATION AND CONCILAITION ACT, 1996

The Three Judge Bench of the Hon’ble #SupremeCourt of India comprising of Justices Rohinton Fali Nariman, B.R. Gavai and Hrishikesh Roy passed a Judgment dated 06.04.2021 in the case of Sanjeev Prakash v. Seema Kukreja & Ors.{Civil Appeal Nos.976 of 2021} and held that a question of #novation of #Contract which contains an #arbitration clause cannot be considered by a Court in a Petition filed under Section 11 Arbitration and Conciliation Act, 1996 (the Act).

In the present case, Mr. Prem Prakash (hereinafter Respondent No. 3) incorporated a Private Company on 09.12.1971 under the name and style of Asian Films Laboratories Private Limited (the Company) and the entire amount of the paid-up capital was paid from his personal funds. He then distributed the shares to his family members without receiving any consideration for the same. On 06.03.1997, the name of the Company was altered to its present name – ANI Media Private Limited.

Mr. Sanjiv Prakash (Appellant) was approached by Thomson Reuters Corporation, a Company incorporated in Mauritius (Reuters), for a long-term equity investment and collaboration with the Company on the condition that he would play an active role in the management of the Company. Pursuant to this, the four members of the Prakash Family (Sanjiv Prakash- Appellant, Seema Kukreja- Respondent No. 1, Daya Prakash- Respondent No. 2, Prem Prakash- Respondent No. 3) entered into a Memorandum of Understanding (MoU) in 1996. The MoU entered into between the family members was responsible for the tremendous growth of the Company. The Prakash Family was to divest 49% of this shareholding in favour of Reuters or its affiliates, subject to necessary permission of the authorities.

Subsequently, a Shareholders’ Agreement dated 12.04.1996 (SHA) was executed between the Prakash Family and the Reuters. On the same day, a Share Purchase Agreement dated 12.04.1996 (SPA) was entered into between the Prakash Family and Reuters. Divestment of 49% of the share capital took place as was set out in the MoU as well as the SPA and the SHA, and Respondent No. 2 resigned as the Managing Director and the Appellant took over as the Managing Director of the Company in 1996.

Thereafter, disputes arose between the Parties when Respondent No. 3 decided to transfer his shareholding to be held jointly between the Appellant and himself, and Respondent No. 2 transferred her shareholding to be held jointly between Respondent No. 1 and herself. The Appellant then served a Notice dated 23.11.2019 upon the three Respondents invoking the Arbitration Clause contained in the MoU and alleged that the reason for the disputes between the Parties was that his pre-emptive right to purchase Respondent No. 2’s shares as was set out in clause 8 of the MoU had been breached. A reply was filed by Respondent No. 1 and 2 where it was alleged that the MoU had ceased to exist on and from the date of the SHA, i.e. 12.04.1996, which superseded the aforesaid MoU. They denied the existence of any Arbitration Clause as the MoU had superseded and did not exist after 12.04.1996.

In response to this, the Appellant filed a Petition dated 06.01.2020 under Section 11 of the Act in the High Court of Delhi (High Court). The High Court vide Judgment dated 22.10.2020 dismissed the same and held that the MoU ceased to exist on and from the date of the SHA which superseded the MoU and novated the same. The Ld. Single Judge held that “Hence, the arbitration clause of the MoU, being Clause 12, having perished with the MoU, owing to novation, the invocation of arbitration under the MoU is belied/not justified.”

Aggrieved, the Appellant filed an Appeal in the Hon’ble Supreme Court of India. Before the Apex Court the Appellant contended that in a Section 11 Application the Court is duty-bound to refer the Parties to arbitration and questions of fact and law relating to novation of a Contract under Section 62 of Contract Act, 1872 are to be decided by an Arbitral Tribunal.

The Bench while agreeing with this argument observed as follows:

“…it is obvious that whether the MoU has been novated by the SHA dated 12.04.1996 requires a detailed consideration of the clauses of the two Agreements, together with the surrounding circumstances in which these Agreements were entered into, and a full consideration of the law on the subject. None of this can be done given the limited jurisdiction of a court under Section 11 of the 1996 Act.”

The Bench while relying upon the case of Vidya Drolia v. Durga Trading Corporation, (2021) 2 SCC 1 said that a “Section 11 Court would refer the matter when contentions relating to non-arbitrability are plainly arguable, or when facts are contested. This is not the stage for the court to enter into a mini trial or elaborate review so as to usurp the jurisdiction of the Arbitral Tribunal.”

Furthermore, the Apex Court observed that the Scheme of Arbitration Act, 1940 and the scheme of Section 16 r/w Section 11(6A) of the 1996 Act, which was introduced by virtue of the Arbitration and Conciliation (Amendment) Act, 2015 is completely different. The scope of the powers of a Court while appointing an arbitrator under Section 11 has now been narrowed down to the fact that whether an arbitration agreement exists between the Parties.

Thus, setting aside the impugned Judgment passed by the High Court, and dismissing the Appeal, the Hon’ble Supreme Court referred the Parties to the arbitration of a sole arbitrator, being Justice Aftab Alam.