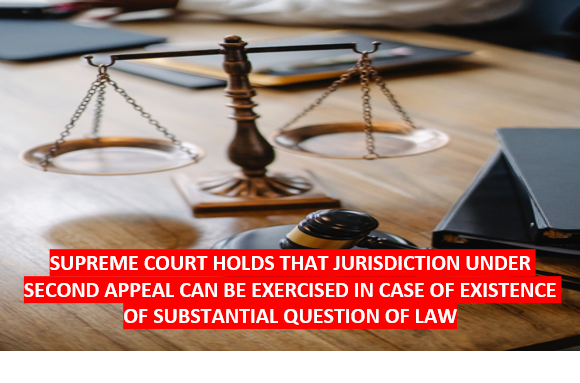 In the present case titled as Chandrabhan (Deceased) Through Lrs. & Ors. v. Saraswati & Ors. in SLP (C) No. 8736 of 2016, a two Judge Bench of the Supreme Court comprising of Justice Indira Banerjee and Justice J.K. Maheshwari vide Judgment dated 22.09.2022, held that the jurisdiction under Section 100 of the Code of Civil Procedure 1908 (CPC) (Second Appeal) can be exercised only if there is substantial question of law involved.

It is the case of the Plaintiff that the adoption was in accordance with the rites and customs of the community, in a ceremony attended by relatives, neighbours and friends. After six months of the adoption, Balram died intestate and the Plaintiff was in the possession of the Suit Properties. In 1979, the Defendant No. 1, Yamunabai purportedly gifted the Suit Properties to her daughter-in-law and wife of Plaintiff, Champabai (Defendant No. 2).

Aggrieved by such transfer, the Plaintiff filed a Suit before the Court of the Civil Judge, Senior Division, at Beed, Maharashtra (Trial Court) against his adopted mother, Yamunabai, Defendant No. 1 and his wife, Champabai, Defendant No.2, praying for declaration of ownership of the Suit Properties, perpetual injunction and other reliefs in his favour.

The Trial Court dismissed the Suit, vide Judgment and Order dated 31.07.1984, stating that the performance of the essential requisites of adoption, such as giving in adoption and taking in adoption had not been established. Hence, the Plaintiff was not entitled to succeed the property of his adopted father, Baliram after his death.

The Additional District Judge, Beed, Maharashtra (First Appellate Court) re-analysed the evidence and found that some discrepancies and inconsistencies were natural since the adoption had taken place in 1950 and evidence was taken in 1984, about 34 years later.  Therefore, some inconsistencies were natural. Therefore, the First Appellate Court, allowed the Appeal filed by the Plaintiff and vide Judgment and Order dated 10.11.1994 concluded that the Plaintiff had been adopted by Baliram and thus entitled to succeed the property of his adoptive father, Baliram after his death, thereby setting aside the Judgment and Order dated 31.07.1984 of the Trial Court.

The Respondent Nos.1 to 4, who were purchasers pendente lite of the Suit Property filed a Second Appeal in the High Court of Judicature at Bombay (Aurangabad Bench) (High Court). The Appeal was not challenged by the Defendant No.1 and 2.

“(I) Whether the first appellate Court has committed error in not considering the circumstance that other transactions of sale made by the defendant No.1 in respect of three agricultural lands like Survey Nos.86/1, 100/3 and 109/2 which were left behind by Baliram are not challenged by the plaintiff in the suit?

(III) Whether the first appellate Court has committed error in not considering the circumstance that the cooperative credit society could not have given loan to the plaintiff on the lands left behind by Baliram as plaintiff was not shown as owner in the revenue record and further there is the circumstance that it is defendant No.1 who had repaid the loan?

(IV) Whether the first appellate Court has committed error in not giving due weight to the circumstance like plaintiff never used name of Baliram as his father anywhere and he continued to use the name of his natural father Rambhau?

(V) Whether due to absence of specific pleadings with regard to particulars of adoption and due to inconsistencies in the evidence of the witnesses it can be said that there is sufficient evidence to prove the factum of adoption?”

Aggrieved by the Order of the High Court dated 01.02.2021 and 10.12.2020, the Plaintiff, Chandrabhan, (since deceased, represented by his legal representatives) filed an Appeal before the Supreme Court against final Judgment and Order dated 11.01.2016 passed by the High Court.

The Apex Court reiterated the principles relating to Section 100 of the CPC (Second Appeal) relevant for this case and observed as follows:

1) The Trial Court had erred in its analysis of evidence and given undue importance to discrepancies and inconsistencies, which were not really material, overlooking the time gap of 34 years that had elapsed since the date of the adoption.

3) The questions raised in High Court, did not meet the tests laid down by this Court for holding that the questions are substantial questions of law and further observed that:

Right of appeal is not automatic. Right of appeal is conferred by statute. When statute confers a limited right of appeal restricted only to cases which involve substantial questions of law, it is not open to this Court to sit in appeal over the factual findings arrived at by the First Appellate Court.

“To be ‘substantial’, a question of law must be debatable, not previously settled by law of the land or a binding precedent, and must have a material bearing on the decision of the case, if answered either way, insofar as the rights of the parties before it are concerned. To be a question of law “involving in the case” there must be first, a foundation for it laid in the pleadings and the question should emerge from the sustainable findings of fact arrived at by court of facts and it must be necessary to decide that question of law for a just and proper decision of the case. An entirely new point raised for the first time before the High Court is not a question involved in the case unless it goes to the root of the matter. It will, therefore, depend on the facts and circumstance of each case whether a question of law is a substantial one and involved in the case or not, the paramount overall consideration being the need for striking a judicious balance between the indispensable obligation to do justice at all stages and impelling necessity of avoiding prolongation in the life of any lis..”

The Apex Court, therefore, allowed the Appeal filed by the Plaintiff by setting aside the Impugned Judgment and Order of the High Court dated 11.01.2016 and restored the Order/Decree of the First Appellate Court in Regular Civil Appeal No.361 of 1984 dated 10.11.1994.