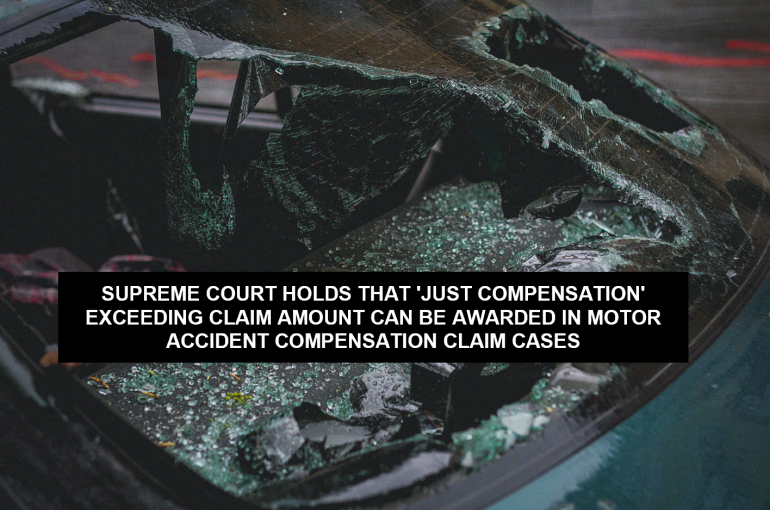 Recently, a two Judge Bench of the Supreme Court comprising of Justice Sanjiv Khanna and Justice JK Maheshwari passed a Judgment dated 14.10.2022 in Meena Devi Vs Nunu Chand Mahto @ Nemchand Mahto in Special Leave Petition (Civil) No.5345 of 2019, and held the ‘just compensation’ exceeding claim amount can be awarded in motor accident compensation claim cases under the Motor Vehicles Act, 1988.

A child, namely Bankee Bihari, aged about 12 years on the date of accident i.e., 29.07.2003, while playing in front of his house, was dashed by a Commander Jeep bearing Registration No. JH-11A 6894 and died on the way, while being taken to a hospital in Dhanbad. A Claim Petition under Sections 140 (Liability to pay compensation in certain cases on the principle of no fault), 166 (Application for compensation) read with Section 171 (Award of interest where any claim is allowed) of Motor Vehicles Act, 1988 (Hereinafter referred to as “M.V. Act”) seeking compensation to the tune of Rs. 2,00,000/- (Rupees Two Lakhs only) with interest was filed by the Appellant, who is the mother of the Deceased Minor.

The Motor Accident Claims Tribunal, Giridih (Hereinafter referred to as “M.A.C.T.”) granted compensation to the tune of Rs. 1,50,000/- (Rupees One lac fifty only) in lump sum. The Mother-Appellant further filed Miscellaneous Appeal No. 16 of 2013 in the High Court of Jharkhand. The High Court enhanced the amount of compensation to Rs. 2,00,000/- (Rupees Two Lakhs only) equivalent to the value of the Claim made in the Claim Petition.

Whether in case of death, a just and reasonable amount of compensation ought to be awarded is permissible?

Aggrieved by the aforementioned Order of the Jharkhand High Court, the Mother-Appellant moved the Supreme Court under Article 136 of the Constitution of India.

The Apex Court relied on the Judgements, Nagappa vs. Gurdayal Singh and others, (2003) 2 SCC 274, wherein it was observed that “under the MV Act, there is no restriction that the Tribunal/Court cannot award compensation exceeding the amount so claimed. The Tribunal/Court ought to award ‘just’ compensation which is reasonable based on the facts and the evidence produced on record. Therefore, less valuation, if any, made in the Claim Petition would not be an impediment to award just compensation exceeding the claimed amount.”

The Apex Court further relied on the Judgement, Kishan Gopal and another vs. Lala and others (2014) 1 SCC 244, wherein the compensation has been calculated treating Rs. 30,000/- as notional income including future prospects in place of Rs. 15,000/- as specified in the Schedule II of the M.V. Act and applying the multiplier as specified in the Judgment of Sarla Verma & Others vs. Delhi Transport Corporation and Another, (2009) 6 SCC. 121.

In the present case, the Apex Court held as follows:

“Applying the ratio of the said judgments, looking to the age of the child in the present case i.e., 12 years, the principles laid down in the case of Kishan Gopal are aptly applicable to the facts of the present case. As per the ocular statement of the mother of the deceased, it is clear that deceased was a brilliant student and studying in a private school. Therefore, accepting the notional earning Rs. 30,000/- including future prospect and applying the multiplier of 15 in view of the decision of this Court in case of Kishan Gopal, the loss of dependency comes to Rs. 4,50,000/- and if we add Rs. 50,000/- in conventional heads, then the total sum of compensation comes to Rs. 5,00,000/-.

Thus, based on the aforesaid observations, the Apex Court held that the Tribunal/Court ought to award ‘just’ compensation which is reasonable based on the facts and the evidence produced on record. Thus, the Supreme Court enhanced the amount of compensation given by the Jharkhand High Court.